McVicar seems to have taken a leaf out of T.S. Eliot’s book: ‘say that the
end precedes the beginning,/ And the end and the beginning were always
there/ Before the beginning and after the end.’ For, during the overture we
gaze at designer Tanya McCallin’s shrouded room, its dark, pendulous drapes
countered by frail white coverings, shadows the only inhabitants
illuminated by lighting designer Jennifer Tipton (lighting realised on tour
by Benjamin Naylor). A cloaked figure appears, pauses in melancholy
reflection, then is carried by ponderous steps the length of the
fore-stage, head bent, to the accompaniment of fragile strings, so light as
to suggest a chamber-like intimacy which the visual scene denies.

Before we know it, the room has gone, swept aside by a falling front
curtain and the cellos’ melodic gaiety (although on this occasion at
Southampton’s Mayflower Theatre the section sang less as a gleeful coterie
and more as individual revellers), as we swing back into the past and into
the insalubrious fin-de-siËcle salons of the French capital where
the courtesans tease and tussle, frothing their skirts and spreading the
legs, amongst the bustled and bow-tied bourgeoisie. Think John Singer
Sargent meets Toulouse Lautrec.

The dining table and grand piano totter with sparkling glasses, piled
plates and gustatory pleasures. It’s clear as they gather eagerly and sway
to a buoyant lilt that during the brindisi the guests are truly enjoying
themselves. But, they are literally walking on Violetta’s grave: the floor
is a black-marble slab, etched with the dates that mark La traviata’s
beginning and end. When Alfredo subsequently takes Violetta in his arms and
tells her she must give up a life that will kill her the proleptic irony is
disturbing. 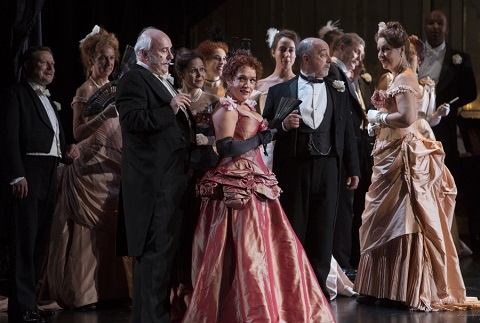 If the choral crowd are sometimes a little static – though hearty of voice
– then individuals are brought to the fore. James Cleverton’s resounding
Baron Douphol watches the nascent courtship from the front of the stage
isolated from the other carousers’ carnality and excess by his jealousy and
anger. Sian Meinir’s Annina hovers watchfully; Flora’s indigo-blue frock
gleams as richly as Rebecca Afonwy-Jones mezzo-soprano and as brightly as
her smile.

Then, suddenly Violetta and Alfredo find themselves alone; the viewer is
disorientated by the change of perspective, sucked into their intimacy.
Kang Wang’s evening-dress looks a little on the large size but his voice is
stylish and secure, if lacking in a really Italianate warmth and ring at
the top. Anush Hovhannisyan is taking the role of Violetta in the two
Southampton performances; her soprano perhaps does not have the fullness of
tone and nuance of colour to really engage our sympathies but the Armenian
soprano has undeniable theatrical presence, and she worked hard to
communicate Violetta’s determination and courage, as well as to intimate
her frailty – no easy task when vocally the singer in the role must be so
robust and sparkling. Hovhannisyan may sometimes have only found a secure
line upon the repetition of a vocal phrase, but she has a lovely way of
withdrawing the note at the top to convey fragility and femininity – and
who would begrudge her repetition of this winning gesture. 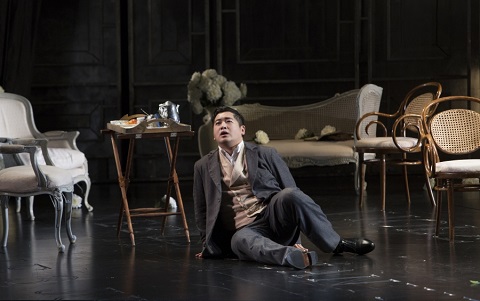 Act 2 finds Violetta prone on her bed, the stage divided by a the curving
hoops of a half-lowered curtain revealing first the lovers’ bedroom, the
shadows looming like ghosts, and then, with a balletic swish, the brightly
lit, gracious ante-room in which Violetta awaits her visitors. If Act 2 is
fired by a greater intensity and truly compelling dramatic momentum, then
this is in no small part due to Roland Wood’s gripping Giorgio Germont.
Wood’s baritone imposes itself with wonderfully supercilious smoothness and
colour, matching the contemptuous condescension of his gestures – the
lifting of frilled layer of Violetta’s dress with his cane, as he sneers
about the extravagance of life is the apex of arrogance. Wood’s encounters
first with Violetta and then with his son in this Act are both menacing and
moving. His iron-rod back, as he refuses to take the open-hearted Violetta
in his arms, as a daughter, is chilling. 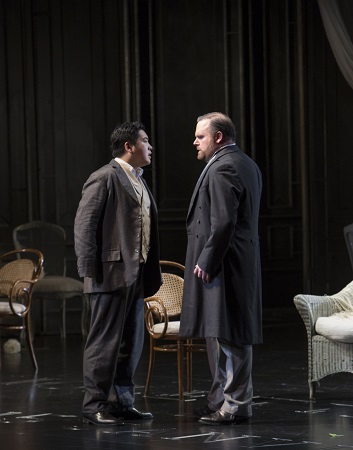 Back in Paris, the excitement at Alfredo’s luck at cards is matched by the
exuberance of the gypsy dancers’ displays; and the entertainment cleverly
integrates the themes of class and money, as Philip Lloyd-Evans’ oily
Marquis d’Obigny shoves some crumpled louis down the cleavage of
one of the can-can girls, and a male ‘matador’ scrabbles on the floor for
the revellers’ carelessly thrown loose notes. Later there is a terrible
desperation and degradation when Alfredo (inelegant in out-sized suit) showers his gambling profits at
the horrified over the salon marble, insulting and intimidating Violetta,
who shrinks under his scornful, spiteful retort that he has now repaid his
debts. Again, some of choral blocking is a little staid: when towards end
of chorus, Flora ventures forward to comfort Violetta and is restrained by
the Marquis, one wishes that McVicar had integrated more such telling
details. Similarly at the close of the scene, the principals too are
static, strung out along the front of stage – a little disengaging in their
spatial isolation and stillness, with Pere Germont seated exhaustedly
stage-right, Alfredo slumped on floor centre-stage, and Violetta standing,
just, stage-left. 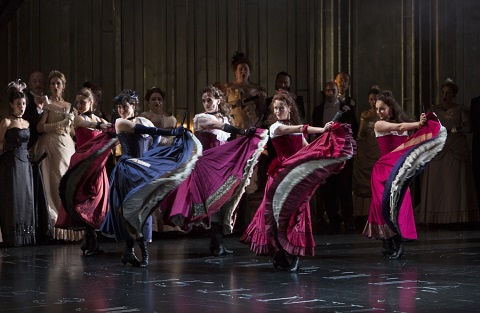 Hovhannisyan comes into her own in the last Act much of which she delivers
while horizontal on bed or floor, but with dramatic magnetism and vocal
focus, her opening agonises accompanied with beautifully shaped violin
accompaniment. Violetta’s fervent grasping, with faux optimism, at the arm
of Martin Lloyd’s pragmatic Grencil recalls the superficiality of her
earlier merriments. Past and present are fusing: when, Germont arrives to
embrace her as a daughter, Violetta’s cry, “It is too late!”, is visually
reinforced by the terrible funereal darkness and erasure of colour and
warmth – even the meagre fire is extinguished, as Violetta’s heart essays
its final flickers.

Conductor James Southall had kept a tight rein on the Welsh National Opera
Orchestra up until this point, taking care that in the Mayflower ‘barn’
they did not overwhelm the singers. But, now the rat-a-tat of trombones was
a spine-curdling knock of Death. One could only hope that T.S. Eliot was
right when he professed that ‘to make an end is to make a beginning./ The
end is where we start from.’