Scheduled in the wake of Veteran’s Day celebrations, and performed at Camp Dodge, the work had an especial, gut-wrenching resonance as it tells the true story of
an American family torn apart during the unsettling era of the unpopular Vietnam War. Cipullo’s masterfully taut adaption of Tom Philpott’s book of the same name, makes a cogent impression in just seventy-five compact minutes with a score that is by turns chaotic, angular, melodic, harmonious, and even at times, serene.
This chamber opera utilizes just four characters, or really just two. I will explain. As the American soldier held longest in captivity during that prolonged conflict, Colonel Jim Thompson suffered unimaginable hardship in the jungles of Southeast Asia. His wife Alyce suffered with her own daunting challenges back home, raising four children and facing brutal, heartrending choices.
The story largely concerns their complicated relationship, as each must contend with personal struggles arising from Thompson’s disappearance, liberation, repatriation, and it is revealed, abandonment by his spouse. The opera utilizes a brilliant device of having a second couple, a “younger” Jim and Alyce reflecting, challenging, and informing their “older” selves. By seeing where the couple began, we see how they arrived at their current state of affairs.
The four actors interact freely and seemingly spontaneously, sometimes in a certain reality of the moment, and on other occasions, time traveling to speak with and about their alternate incarnations. They sometimes briefly enact other characters. This is not a strictly linear narrative but rather an intriguing mosaic of impressions and factual information, stunningly interwoven in a soul stirring evening of profound suffering and eventual forgiveness and redemption. Jim Thompson is truly a heroic subject, worthy of ennoblement by a thrillingly varied score, mesmerizing libretto, and a flawless, kaleidoscopic staging by the abundantly gifted director, Kristine McIntyre.
The central playing space has audience members on all four sides and Ms. McIntyre has devised fluid, continuously morphing stage pictures that not only underscore the dramatic truth of the situations, but also keep each segment of the audience fully immersed in the drama by having at least one character playing in their direction. She drew deeply personal portrayals from her superb cast. And she has obviously toiled to great effect as she developed “younger” and “older” versions of Jim and Alyce that share identical personality cores as well as an eerily unified approach to the roles’ physicalization. We really believed that these were two embodiments of the same two souls.
I may have said it before, but it bears repeating: Kristine McIntyre is one of the foremost directors working in opera today. If you see her name in the credits, rest assured it is going to a top tier, often revelatory experience. She was ably abetted by a superlative creative team.
Adam Crinson’s effective set design features a simple island, an “X” of platforms, with flats masking entrances on all four corners, which are painted in shades of tropical green, marked with images of falling palm fronds that “spill” onto the stage. There is something almost sacrificial of the altar-like raised central platform. The simple, short bamboo stools and piles of (unread? unreceived?) letters guttered in the corners of the set are the only real dressing, save for the silver stars hanging from the grid that reinforce an important “beat” in the plot. Judicious use of well-produced film projections added immeasurably to the visual impression. 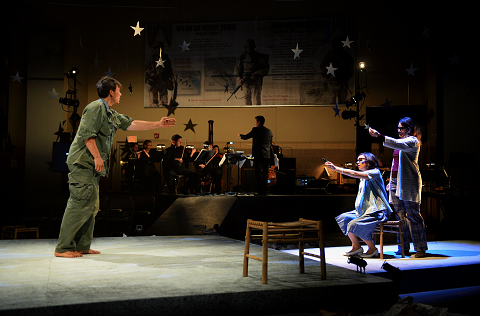 Photo credit: Duane Tinkey.
Kathy Maxwell has worked wonders with a beautifully calibrated lighting design, all the more remarkable for the economy of instruments and the difficulty of lighting an arena configuration. Ms. Maxwell devised a moody, expressionistic, characterful look that served the dramatic moment at every turn. Heather Lesieur’s deceptively simple costume design was a key factor in visually defining these characters, especially the eternally pregnant “younger” Alyce, and the well chosen black horn-rimmed glasses for both Alyce’s.
As Jim Thompson, baritone Michael Mayes anchored the evening with a star turn that was simply amazing. (Or is it, A-Mayes-ing?). There is no aspect of this tremendously complex role that eludes him musically or dramatically. His deep personal commitment to portraying this eminently tragic figure is exceeded only by his incredibly effective vocalizing. Having experienced his straightforward, powerfully sung Scarpia a few seasons ago, I was not prepared for the total mastery of the nuances he brought to bear on this evening.
Mr. Mayes not only gifted us with the powerful beauty of his burnished instrument, but he also made my jaw drop with meticulously calculated, wondrously controlled sotto voce effects, including some breath taking forays above the staff. His complete immersion into the suffering and physical disintegration of his character were as commendable as they were poignant. His tour de force impersonation was well matched by his “younger” counterpart.
John Riesen’s “Younger Thompson” held the stage with a vibrant, focused tenor, and an impassioned performance of complete commitment and coltish deportment. Mr. Reisen bolted about the stage, flailed at his captors’ abuse, repeatedly flung himself on the floor, and managed to do all of this while singing with secure abandon. 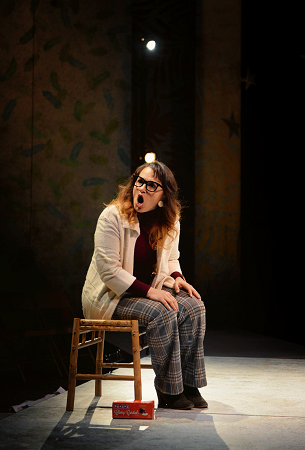 Photo credit: Duane Tinkey.
Kelly Kaduce was a magnificent Alyce, turning in yet another finely etched performance. The soprano was in especially fine voice, her secure, pliable tone and dramatic delivery in complete service to the role at hand. She is a beautiful woman, often presented in glam make-up and attire to luxurious effect. On this occasion, Kelly appeared against type, embodying a rather plain hometown girl. Her acting was simple, candid, and she totally believed in the correctness of her character’s choices. The horrible stillness encompassing her confessional aria was underscored by her alluring, purposeful delivery.
As “Younger Alyce,” Emma Grimsely showed off a silvery, gleaming soprano that was a perfect contrast to Ms. Kaduce’s weightier delivery. Ms. Grimsley was a wholly sympathetic figure, and her limpid, freely produced singing was enchantingly delivered. One caution: her subtle singing early on may have eluded the ears of a few audience members. One caveat to Mr. Cipullo: “Younger Alyce” is the only character who does not have an aria. Although she does have the radiant final phrase of the opera, might you please give her a solo “scena” to balance the quartet?
In the pit (here an elevated platform), Joshua Horsch conducted with steady acumen and considerable aplomb. Maestro Horsch has helmed this piece before and it shows in his well-controlled, colorful reading. The orchestration calls for substantial exposed playing from a small band of (for all intents) soloists, and the conductor drew a highly satisfying ensemble reading from his highly skilled instrumentalists. Horsch ably collaborated with his quartet of singers with a completely realized orchestral partnership.
There are many highlights in Tom Cipullo’s score that deserve mention: “Older Thompson” has a riveting litany of (mostly) shit happenings that occurred, unbeknownst to him owing to his isolation, that echo Billy Joel’s We Didn’t Start the Fire. The 23rd Psalm serves as a disturbing Cantus Firmus sung by “Younger Thompson,” as the other three characters embellish it with edgy, turbulent vocal lines. The orchestration includes many instances of telling effects, including the cruel interjections of a slapstick as the captive Jim is being abused. 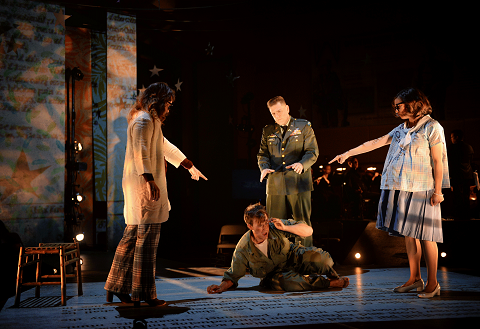 Photo credit: Duane Tinkey.
Whether by luck or design, there was also a stunning impression created by the “younger” duo being shorter than their “older “ counterparts, conveying the impression that the weathered adults are looming over, dominating their remembered selves. This wholly successful presentation was complemented by a meaningful talk back after the show that included Vietnam vets and military personnel currently serving.
Des Moines Metro Opera is a major force in the national opera scene, and if any reinforcement of that was needed, after this remarkably effective mounting of Glory Denied, I can emphatically say: Mission Accomplished.
James Sohre
Glory Denied
Music by Tom Cipullo
Text by Tom Cipullo based on the book
By Tom Philpott
Older Thompson: Michael Mayes; Older Alyce: Kelly Kaduce; Younger Alyce: Emma Grimsley; Younger Thompson: John Riesen; Conductor: Joshua Horsch; Director: Kristine McIntyre; Set Design: Adam Crinson; Lighting Design: Kathy Maxwell; Costume Design: Heather Lesieur