Is there a degree of overkill, especially when it comes to a far from
adventurous production? Perhaps, although I am well aware of the (alleged)
reasons for a company performing the opera so frequently. Do they add up,
though? Judging by the number of empty seats at the Coliseum on this, the
first night, I am not sure that they do. Might that indicate that it is
time to give the work a rest or a new production? Again, perhaps, although
what in the present climate would be an adequate substitute for box-office
certainty? Perhaps there is no longer any such thing. Is that a bad thing?
For a company struggling with declining funding and years of mismanagement
– remember the self-styled ‘She-E-O’, Cressida Pollock, granting interviews
about how she liked to relax with a bottle of wine whilst wearing her
favourite training shoes, at the same time as attempting to sack the
chorus? – the answer would seem to be yes. On the other hand, might it
ultimately be a prod towards diversity of repertoire, towards taking
Puccini as something more artistically serious than a box-office certainty,
towards asking whether a performance in an often jarring English
translation vaguely ‘after’ Giuseppe Giacosa and Luigi Illica is really the
best way to ‘sell’ as well as to perform this work to a multicultural
audience? Perhaps. We shall see.

One very welcome aspect of this performance – and possible justification
for retaining the production a little while longer – was the opportunity it
granted, well grasped indeed, to a young cast including two of ENO’s
Harewood Artists: Nadine Benjamin and Boûidar Smiljani?. Benjamin’s Musetta
is very much her own woman, no mere memory of other Musettas we have heard
– or claim to have heard (‘does not efface post-war memories of Dame
Ermintrude Heckmondthwike, “Ermie” we called her…’). Not that she
was different for the sake of it, quite the contrary, the crucial facets of
Musetta’s character coming through bright and clear, but fresh too, very
much an acquaintance as well as a reacquaintaince – and a vocal
acquaintance too. Smiljani? is likewise an able actor and impressed greatly
both as soloist, insofar as possible for a Schaunard, and in ensemble.
Likewise David Soar as Colline, his final-act moment something truly to
savour. Nicholas Lester’s Marcello was definitely a cut above the average,
rich and, where appropriate, ardent of tone, hinting cleverly at far more
to the character than we ever officially learn (surely so much of the trick
to a compelling Puccini performance). Simon Butteriss’s comedic turns as
BenoÓt and Alcindoro even had a doubter such as I consider the approach
(Miller’s, I suspect, more than the artist’s) perfectly justified. 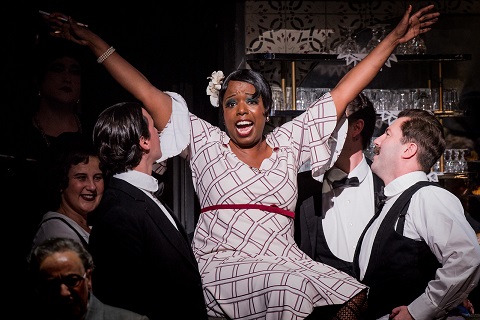 Last yet anything but least, our pair of star-crossed lovers, played by
Jonathan Tetelman and Natalya Romaniw, showed themselves (mostly) sensitive
artists who could yet project to the back of the largest of theatres.
(Alas, the Coliseum remains not the least of ENO’s problems, whatever
audience members ‘of a certain age’ might claim.) Romaniw’s MimÏ proved
perhaps the more moving early on, but that is more likely a consequence of
the opera itself than of any great performative disparity; both certainly
moved in the final tragedy of the work’s final minutes. If only they had
not on occasion – under instruction, I suspect – played to the gallery,
treating their ‘big moments’ as stand-alone arias. The real culprit here, I
think, was Alexander Joel. His conducting of the ever-excellent ENO
Orchestra was incisive and mostly unsentimental, but he seemed incapable of
thinking – or at least projecting – a greater unity to each act, let alone
to the score as a whole. Of Puccini’s ‘symphonism’, we heard little or
nothing.

As for Miller’s production, ably revived by Natascha Metherell – who surely
deserved a curtain call – it is what it is. Paris updated to the thirties
looks beautiful, occasionally desperate too; Personenregie is
keen. As mentioned above, I am more reconciled to its comedy than I first
was. Moreover, I rather like – some do not – the glimpses we catch of
characters off the set as such, carrying on with their lives. Something a
little challenging or interesting, though, would surely not go amiss in the
future. As yet, few if any directors seem to have matched Stefan Herheim’s
challenge in his superlative Norwegian Opera production, let alone gone
beyond it. Will time tell? Perhaps.