It’s also a mystery why it’s taken 15 long years for local audiences to see the Wunderkind’s supernatural masterpiece based on an Italian libretto by Lorenzo de Ponte, in turn originally inspired by the legend of Spanish libertine Don Juan with its last MO incarnation staged in 2003.

However, Canadian bass-baritone Daniel Okulitch hailed as “flat out brilliant” by Opera News proved well worth the wait, donning – in this case – the matador’s mantle, as he reprised his signature title role he’s now performed a dozen times worldwide. The Ottawa-born artist electrified the November 24th opening night crowd with his stylized, swaggering toreador the fulcrum to Spanish-born director Oriol Tomas’s artistic vision (marking his MO debut), nearly stealing the show with every haughty, struck pose and whip-cracking foot stomp, as well as oozing charisma during his serpentine seduction of his female prey caught in his crosshairs. 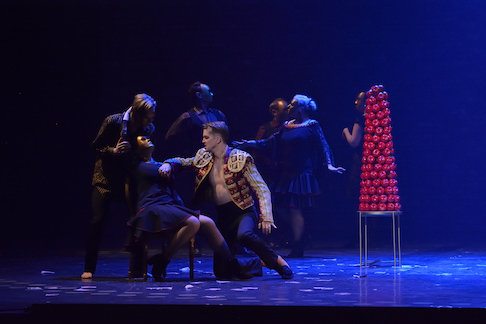 MO Music Advisor and Principal Conductor Tyrone Paterson led the Winnipeg Symphony Orchestra with his customary finesse throughout the 175-minute (including intermission) production. Scott Henderson created eye-popping lighting effects heightened by billowing stage smoke, while a wonderfully imagistic, tiered set of a skeletal bullring with hipster-vibe costumes from Edmonton Opera evokes past glory – and gory – days of blood-soaked bullfights, or alternatively a futuristic, burnt-out shell still moaning with death and decay from a not-so-distant past.

What makes this production sing are its two male leads. Okulitch as a fine actor displays supreme conviction and ease as he traverses his narrative arc, matched equally by his unflinching embodiment of Giovanni’s deepest, most volatile desires.

His wheedling of Zerlina, sung by soprano Andrea Lett during the Act I wedding party scene, which quickly escalates into a full-on sexual assault juxtaposed with Mozart’s genteel orchestral accompaniment is the stuff of nightmares – and kudos to both these strong perfomers for their no-holds-barred realization of the stomach-churning narrative.

Okulitch’s richly resonant vocals, including clear diction and agile phrasing were also exhibited during his effortless, trip-off-the-tongue Italian recitatives, and a rapid-fire delivery of famous, fizzy champagne aria, “Finch’han dal vino,” as effervescent as a glass of bubbly. 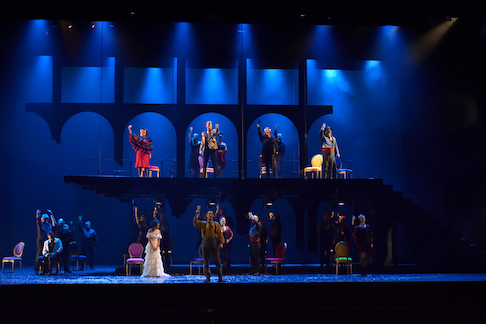 But his chameleonic artistry also includes an impressive emotional palette, with an innate ability to mine the subtlest nugget of gold from this operatic Gibraltar, including his lushly romantic “Deh vieni alla finestra,” wooing Elvira’s maid with his soaring, lyrical voice that seemingly knows no bounds.

Canadian bass-baritone Stephen Hegedus easily holds his own against Okulitch’s bravura performance as Giovanni’s valet/sidekick – and witness – creating oceanic undertows of sub-text as he rails against, reveres, and finally, triumphantly wrests power during the final brilliant image as his master perishes. His biting into an apple as forbidden fruit packed its own emotional wallop, courtesy of Tomas’s sensitive direction that also showed his knack for creating numerous, compelling stage tableaux.

Hegedus’s spot-on comedic timing during Act II’s opening scene, where he disguises himself with Giovanni’s sartorial jacket had viewers in stitches with his buffoonery, as well as during his “catalogue aria,” “Madamina, il catalogo e questo,” in which he nonchalantly lists Giovanni’s conquests to a gaping Elvira.

The trio of female leads that serve as the opera’s backbone must create a compelling, collective whole, as well as individuate their own respective characters as they embark on their own journeys. Mostly, the three Winnipeg-born, bred or based sopranos succeeded, albeit with a few bumps along the road. 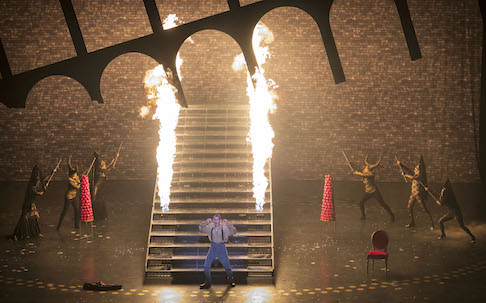 Jessica Strong, marking an auspicious MO debut as soloist projected her lusciously warm vocals, including gleaming top notes during each of her major arias, including “Or sai chi l’onore Rapire a me volse,” and later, a limpid “Non mi dir,” as well as eye-of-the-storm trio “Protegga il giusto cielo” sung with Don Ottavio (tenor Owen McCausland) and Elvira as they plead for heavenly protection. She also instilled fascinating sub-text into her role, torn between lust and revulsion for Giovanni, with her solid acting skills morphing through prismatic gradations of emotional colour.

Lyric soprano Monica Huisman crafted a wildcat Elvira who becomes the scourge — and moral checkpoint — of Giovanni’s existence, bringing bushels of energy to the stage with her indignation, at times so heightened that it caused slight intonation issues with her uppermost range. Still, this powerhouse delivered her “ Ah, chi mi dice mai” with the fury of a woman scorned, as well as her subsequent “Ah, fuggi il traditor” in which she thwarts Giovanni’s first seduction of Zerlina that also showcased her innate dramatic flair.

Last but not least, Lett’s lighter, albeit crystal clear, assured lyric soprano voice nailed each of Zerlina’s arias, including (mercifully) injecting dramatic irony into “Batti, batti o bel Masetto,” in which she invites husband Masetto (baritone Johnathon Kirby) to punish her for being tempted by Giovanni, as well as “Vedrai carino,” that flips the narrative on its head as she sly seduces Masetto making this opera equal-opportunity.

American bass Kirk Eichelberger instilled gravitas in his ghostly role as The Commendatore, including his booming “Don Giovanni! A cenar teco m’invitasti” sung to an increasingly unrepentant Giovanni. The Act II cemetery scene, in which tombstones are replaced by hanging, severed bulls’ heads created an arresting trompe l’oeil, with (depending on sightlines) his own human skull appearing replaced by that of a hulking beast.

Tomas (wisely) opted to omit the final ensemble, as per the Viennese libretto of 1788 in which the cast reappears to deliver a neatly sewn up moral, typically included since the early 20th century. Still, the opera’s shuddering finale felt oddly anti-climatic. All-too-brief pyrotechnic effects, while still shocking, felt less flaming-tongues-from-hell, than nifty special effects borrowed from your latest rock concert. And a rafter-shaking voice like Eichelberger’s really doesn’t need to be amplified, which only jarred the senses, while the female demons that suddenly appeared onstage felt far too Canadian-polite.

Having said all this, kudos to Tomas and his committed cast for bringing Mozart’s perennial classic to life, now grown even more resonant with today’s brave new #MeToo bullrings still blood-soaked with beasts of cutthroat power, politics and ever-threatening, pervasive sexual predation.