But, once the incipient flickers got a sure grip on the dramatic wick, some
terrific individual performances, which were both strong and subtle,
brought Verdi’s tense, urgent drama vividly alight.

Although Boito later worked his magic on the Piave/Montanelli libretto of
the first, failed 1857 Simon Boccanegra, even Verdi’s revised 1881
version has its dramatic short-comings and inconsistencies. Moshinksy’s
production, now nearly thirty-years old and oft-revived, at Covent Garden and
overseas, may be ‘traditional’ – the chorus blocking is rather uninspired,
making both mob and ministers a rather faceless mass – but it brings
clarity to the inherent improbabilities and coherence to the
contradictions, despite the time-shift of twenty-five years between the
Prologue and Scene 1.

It’s also a handsome production. The nefarious machinations of Paolo and
Pietro, as they seek to overthrow the aristocracy and elect the former
Corsair, Boccanegra, as Doge, are preceded by a vision of the rolling spume
of the Ligurian sea, lending the scene a romantic detachment to add to the
historical ‘distance’ of Renaissance setting. The colonnades and piazzas
are imposing in expanse and weight, but simple in design, and beautifully
lit by John Harrison. After the shadow-cloaked intrigues of the Prologue,
the terrace upon which Amelia sits waiting for her beloved Adorno to arrive
shines with a gentle sky-blue shimmer: with its vista of a calm,
dawn-drenched ocean, it seems a spot where one might come upon Othello
regaling Desdemona with a ‘travailous history’ she devours with greedy ear. 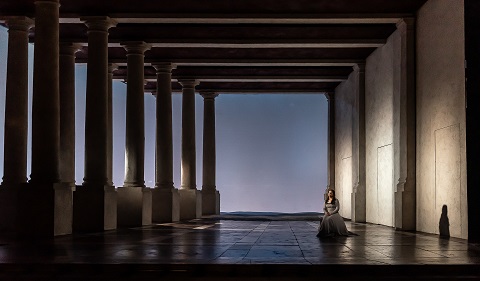 There is much to beguile, but on the first night of this revival run, which
has been overseen by Moshinsky, initially things didn’t seem to gel. The
singers are often set to the rear of the deep set and their voices
occasionally seemed detached from the orchestral fabric, not exactly ‘all
at sea’ but somehow floating along without ever really riding the waves.
The Council Chamber scene was a visually arresting canvas of golden
sceptres, silver swords and fiery red – the crimson robes and regalia of
office, the heated blood of the baying plebeians – but, despite the
intensity of the scene, which tightened like a sprung coil, the drama
didn’t quite seem ‘real’.

The five male roles were vocally individualised, but the principals also
need to work together, something that they struggled to achieve in Act 1.
And, Hrachuhi Bassenz seemed uncomfortable in this Act, her voice sliding
up to, or just under the note, and floating thereabouts but never quite
settling into a true lyrical line – of the kind that would fulfil the
dramatic requirements of the role. Though Bassenz’s tone was not harsh, it
lacked a soft shimmer and was occasionally a little murky. The Armenian
soprano was stronger in the ensembles, attacking the words and investing
her interventions in the Council Chamber with both anxiety and anger. 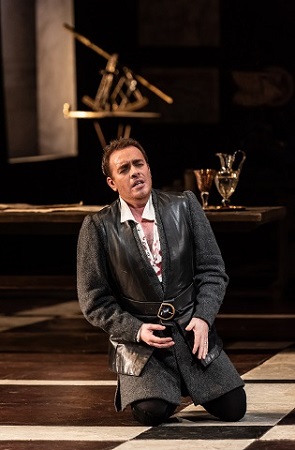 The move from public domains to private dramas in Act 3, however, seemed to
initiate fresh intensity and to inject the singing and playing with a
passion which had authenticity and power. Francesco Meli got the ball
rolling, his fervent ‘Sento avvampar nell’anima’ fuelling both his own
jealous rage and the opera’s emotional thermometer. It also prompted a
fairly sedate ROH audience, whose coughing and fidgeting had outweighed
their attentiveness up until this point, to offer their first endorsing
applause. Meli certainly conveyed Adorno’s hot-headedness, and the crests
of his phrases were ardent and aching, but both his vocal volume and
characterisation were a little unalleviated, and he didn’t fully convey
Adorno’s divided and fluctuating allegiances.

It was left to the two men who are locked in a conflict which is both
historical and haunting to reveal the opera’s real, human drama. As the man
who comes from low beginnings to rule in Genoa for twenty-five years,
Carlos ¡lvarez was following some ‘big names’ in this production, including
Domingo in 2010 and

. He impressed immensely, using his warm tone and consistent focus to
create a credible portrait of a man whom misfortune and misery, alongside
the powers of public office, have made tyrannical, but who learns to
forgive, shows magnanimity, and finds redemption. 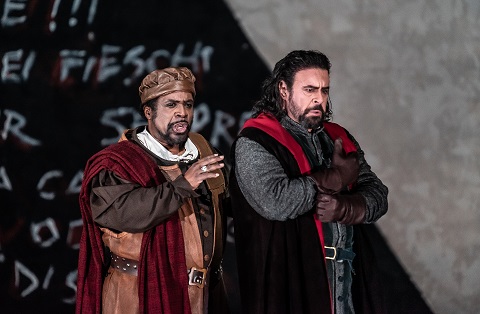 The long scene in which Boccanegra discovers that Amelia is in fact Maria,
his long-lost daughter, was beautifully structured, but it was Boccanegra’s
framing confrontations with Ferruccio Furlanetto’s Jacopo Fiesco that
struck the most incisive emotional punch. The two men had equal dignity,
might and majesty, ensuring that both their conflict and their conciliation
were gripping. Furlanetto’s voice may not have the firmness of old, and
some passages at the top were not as full-toned as one might wish. But, his
diction was superb; and, the trembling depths of his bass in the Prologue’s
‘Il lacerate spirito’, when Fiesco learns that Maria has died, evoked the
shuddering grief of a stricken heart with a power that resonated in my own. 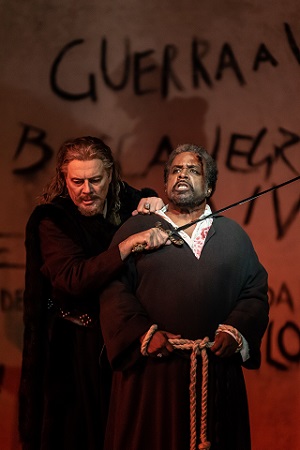 Simon Shibambu sang with confidence and presence as Pietro, but Mark
Rucker’s Paolo made less impact vocally. Under conductor Henrik N·n·si the
ROH Orchestra matched the darkness of the drama on stage, though I’d have
liked rather more urgency in the opening scenes.

By the end, though, the chilling horror conjured by Boccanegra’s
blood-curdling curse, ‘Sia maledetto’, had been both released with
tremendous visceral force and tamed through real human compassion and
reconciliation. Those political plotters currently planning coups and
crises in another Palace just a bit further up the river might do well to
take note.