So suggests Olivia Fuchs, in her new production of Handel’s Semele for the Royal Academy of Music. King Cadmus of Thebes may
proclaim ‘flashes of auspiciousness’ to the wedding guests awaiting the
nuptials of his daughter Semele and Athamas Prince of Boethia at the Temple
of Juno, when the Goddess accepts his sacrifice, but the guests’
celebratory chorus, ‘Lucky omens!’, proves deluded and short-lived.

Their mobile ’phones record every marriage-moment, Instagram-ready for
public consumption, but Semele has her eyes on a higher prize: Jupiter.
There’s nothing wrong with ambition, but when one’s desires are a merely
the reflection of a mirror, aspirations become warped. Not content with
being worshipped by mere mortals, Semele desires immortality itself, but
her dalliance with the deities seals her own destruction: death not by
thunder-bolt but by flash-bulb.

Fuchs’s modern-dress production finds some neat parallels between the
marital infidelities of the Ovidian myth; the fears of Handel’s
contemporary public that King George II would make his mistress, Amalie von
Wallmoden – whom he had set up with a title and large income – Queen of
England; and modern-day celebrity-dom, a realm fuelled not by heavenly
spheres but by a paradoxical and toxic mix of excess and emptiness. If she
pillories those who, in a crisis of identity and authenticity, believe they
are ‘stars’ through the seemingly hackneyed opera-trope of the snapping
mobile ’phone, then that seems to be Fuchs’ point: the celebs, and the
malleable masses, never learn. There’s little star-dust to be found in a
life lived as a commodity: an image without substance, offered up for
public consumption.

The simple and clear designs, by takis, cleverly elucidate the
incompatibility of the earthly and the celestial, and the destruction that
is unleashed when these realms interact. During the overture, the curtain
lifts to reveal a rather inauspicious wedding venue: a dingy, subterranean
‘bunker’ where, amid the assorted wooden chairs that anticipate the guests’
arrival, the principals enact a mime which usefully outlines allegiances
and motivations. If their gestures are sometimes reminiscent of the
expressionism of 1920s’ silent cinema, then the hint of histrionics is apt.
The guests’ black evening-wear proves fitting when Jupiter’s eagle sweeps
Semele up to the stars and events take a more funereal turn. 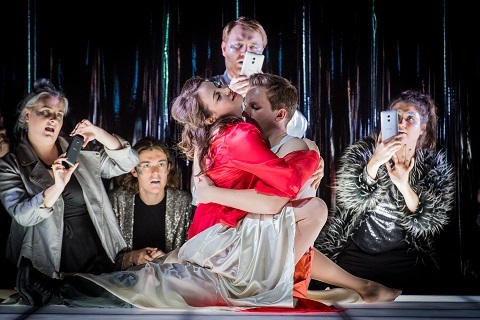 An overhead light-box is lowered and, like a floating four-poster bed,
wafts Semele upwards to Jove’s palace, where ‘endless pleasures, endless
love’ await her. This Semele’s appetites, both material and carnal, prove
insatiable: the chorus swap black for celestial silver and pander to her
whims, while the enraged Juno-cum-Anna Wintour (a fine performance by
Frances Gregory) plots her demise with her put-upon but willing PA, Iris.
Lighting director Jake Wiltshire gives the star-spotted sky a glow of
night-club pink and green, creating a palpable sense that the heavenly
hedonism is going to come to an end with that metaphorical midnight-chime.

The young cast, the first of two, sang superbly on opening night. Even more
impressively, they did so while accomplishing Fuchs’s busy stage
directions. In the title role, Lina Dambrauskait? skilfully showed how
Semele’s solipsism grows, from sulky beginnings as she is reluctantly
divested of her dressing gown and forced into a frothy gown, through
sensuous self-indulgence when she subsequently sheds the candyfloss
confection for a crimson silk camisole, to stubborn self-delusion as Jove’s
acolytes fawn over and fondle her. Despite the dramatic distractions,
Dambrauskait?’s delivery of the coloratura was near faultless, peppered
with some judiciously extravagant elaborations. Her tone was beautifully
bright as she anticipated those ‘endless pleasures’, there was a delicious
wryness about ‘Myself I do adore’ and few could surely deflect the
determined, near-deranged, demands and desires which Dambrauskait? threw at
the hapless Jupiter in ‘No, no, I’ll take no less’. 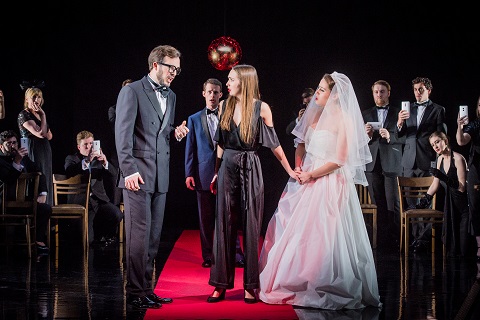 Ryan Williams did his best to sway his beloved though, and when the
champagne, chocolates and flowers, helpfully supplied by AimÈe Fisk’s
Cupid, failed to win over the piqued and pouting Semele, it seemed for a
moment that the sparkly Jimmy Choos might just do it. But, no. This Jupiter
shaped his recitative wooing and worship elegantly, lovingly comforted in
‘Lay your doubts and fears aside’, beguiled with gentle lyricism in
‘Where’er you walk’, and warned his wilful woman with vocal punch and
persuasiveness in ‘Ah, take heed what you press’. But, the beauties of
Arcadia proved less appealing than the temptations of Semele’s own targets.

Olivia Warburton had impressed in the title role of


at the London Handel Festival earlier this year, and here she made a strong
impact as Semele’s sister, Ino, finding sadness and serenity in the role:
her duet with Dambrauskait?, when the sisters are briefly re-united in
Jupiter’s paradisal gardens was one of the highlights. I’m not sure that
her boogie-woogie wiggles to Athamus’s aria of acceptance, ‘Despair no more
shall wound me’, sung with clarity and strong projection by Alexander
Simpson, were entirely in character, but Warburton’s celebratory cartwheel
was certainly impressive.

Thomas Bennett didn’t quite summon sufficient nobility of line as the
distressed Cadmus, though his tone was warm; but his recalcitrant Somnus
was strikingly sonorous despite his somnolence. Emilie Cavallo (Iris), Maya
Colwell (Pasithea) and Joseph Buckmaster (Apollo) completed the fine
line-up.

The Chorus were superb: their diction, strength, tone, co-ordination and
choreography were all equally notable. The monumental terror and majesty of
‘O terror! and astonishment’ were terrifically emotive and powerful. I
found the playing of the Royal Academy Sinfonia a little lacking in colour
and character, though the lightness of the ensemble sound did make for some
fleet runs. And, there was impressive virtuosity from individual players,
especially from the bassoon player who underpinned Jupiter’s worried
warning to ‘take heed’. The chamber organ was used to good effect.

At the close, Buckmaster’s Apollo, resplendent in purple suit and silver
lame trainers, descended with a babe in his arms: the phoenix that arises
from Semele’s ashes, the unborn child of mortal and god. But, despite the
choral rejoicing, ‘Happy shall we be’, Athamus seemed disenchanted by
Apollo’s reassurance that this baby Bacchus will be a god ‘more mighty than
love’, taking umbrage at Ino’s apparent devotion to the new addition to
their family and storming off in a jealous sulk, leading Ino to seek solace
in father’s arms once more. So, this lieto fine was less than
fortunate: disillusionment and disappointment, not dreams, will be your
lot, Fuchs seems to say.