The words of Benjamin Britten in his speech, On Receiving the First Aspen Award, on 31st July 1964,
two years after the premiere of the composer’s War Requiem on 30 th May 1962 in Coventry Cathedral, the destruction, rebirth and
consecration of which the work was commissioned to commemorate and
celebrate.

Interestingly, in his Aspen Award speech Britten also reflected upon what
he called the ‘so-called “permanent” value of our occasional music’, noting
that we should not worry too much as, ‘A lot of it cannot make much sense
after its first performance, and it is quite a good thing to please people,
even if only for today’. And, pragmatically Britten observed, ‘One must
face the fact today that the vast majority of musical performances take
place as far away from the original as it is possible to imagine’.

There have, inevitably, been numerous performances of Britten’s War Requiem this year, some in gothic cathedrals, others in
venues of diverse function, form and acoustic.
English National Opera’s Artistic Director Daniel Kramer and Turner
Prize-winning artist Wolfgang Tillmans have now brought the War Requiem into the opera house and placed it upon the theatrical
stage. In so doing, they continue the trend for staging Passions, oratorios
and Requiem masses which has seen Deborah Warner, Peter Sellars, Jonathan
Millar, Calixto Bieito et al attempt to make ‘drama’ from ritual
and liturgy.

Britten’s War Requiem captured the sentiments of a world reeling
with the grief of a century of war. Britten spoke in his Aspen Award speech
of the ‘many times in history the artist has made a conscious effort to
speak with the voice of the people’. His belief that it was the
responsibility of the creative artist to communicate directly to society
was expressed time and again: in his speeches on receiving the Freedom of
the Borough of Aldeburgh and on Receiving Honorary Degree at Hull
University’, both in 1962, for example.

But, the Requiem is many things. It is a public statement of the
composer’s own pacifism, prompting our understanding that war does not
cease when warring nations put down their guns. It is also a homage to
Wilfred Owen, whom Britten described as ‘by far our greatest war poet, and
one of the most original and touching poets of this century’. Britten
scholar Philip Reed has suggested that what Britten admired was the
directness of Owen’s poetry and the fact that it highlighted the ‘ironic
conflict of verbal and musical messages’ when juxtaposed with the Latin
Requiem text.

So, in additional to the verbal and musical messages, do we need visual
images too? What will they add, diminish, change?

Essentially, Kramer’s and Tillmans’ War Requiem is a series of
such visual images, presented with technological slickness and potently lit
by Charles Balfour. None of these images are inappropriate; some, in my
view at least, are somewhat hackneyed; some are striking.

Kramer and Tillmans begin with reference to a visually driven narrative
which was designed to bring about social and cultural change. Two halves of
an open book tower over and straddle the stage in the ‘Requiem aeternam’.
The pages of Ernst Friedrich’s War Against War flick over,
exposing the captions and photographs which the young German – an anarchist
and anti-militarist activist who had been incarcerated during WW1 for his
refusal to fight – intended to unmask nationalistic propaganda and lay bare
the false narratives of militaristic rhetoric. Dis?gured faces – ‘The
Visage of War’ – stare at us, as we stare at them: through such visual
activism Friedrich aimed to challenge politically correct ‘ways of seeing’
and create an experienced, rather than imagined, intimacy between viewer
and viewed. 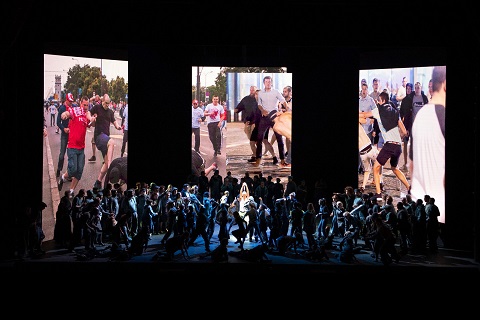 But, the pages of the book turn quickly, evading our gaze, and are
succeeded by images of other conflicts, horrors and inhumanity. During the
‘Liber scriptus proferetur’, a poster, ‘Breaking the Silence: Gender and
Genocide’, urges us to remember the massacre in Srebenica in 1995. Then,
the uniforms are of a different kind of patriotic allegiance as
bottle-throwing football thugs march through the streets. Monochrome
photographs of the ruined shards of Coventry Cathedral remind us of the
origins of the work – composed in the aftermath of another world war, and
at the height of the Cold War with the threat of nuclear conflict
terrifyingly real – and of Britten’s remark, made during rehearsal for the
1963 Decca recording, that the ‘Libera Me’ “happens today to mean
something”. 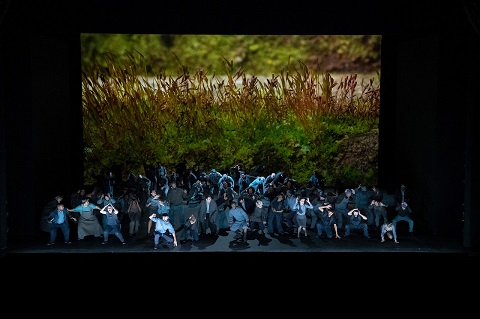 Juxtaposed with man’s inhumanity are nature’s cycles of decay, death and
renewal. The camera scrutinises the stripped bark of a fallen tree trunk as
it sheds its protective skin, skims sea-surf scummy with pollution, and
hugs a ground embraced by ferns and moss. A cloud of snow explodes,
bringing another war poem by Owen to mind, with its image of ‘air that
shudders black with snow’. The snow-dust blankets the stage – assuaging and
beneficent, or hostile to man who has negated nature and alienated himself
from its nurture?

There are some moments where image, word and movement are brought together.
‘So Abram rose’ and the ‘Quam olim Abrahae’ are illustrated by an aerial
shot of a sacrificial sheep, as tenor David Butt Philip, dressed in an
officer’s great-coat, oversees a procession children: lambs to the
slaughter, indeed, or as Owen bitterly describes, ‘men who die like
cattle’. 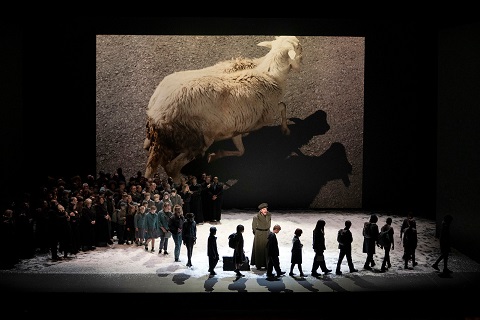 When asked about the ‘sweetness’ of the War Requiem’s final pages,
in an interview with Charles Osbourne in 1963, Britten responded, “I can’t
see any great defect in sweetness as long as it’s not weakness”. At the
close, Kramer and Tillmans open a window on dense, verdant leaves of
renewal, though the lingering agitations of the side drum and snares seem
more in keeping with the ambivalent questions of Owen’s poem ‘The End’:
‘Shall Life renew these bodies? Of a truth/All death will He annul, all
tears assuage?’

The choreography of the enlarged ranks of the ENO Chorus – who sang with
fervency and impact – offers no surprises. They lie motionless, are
marshalled in ranks, they march, they mourn. They, and the projected
images, don’t ‘show’ us anything that we can’t already hear.
Fluctuating grey-green fogginess backlights the ‘Libera me’, but we can
hear the cacophonous slaughter in the violence of the percussion and,
later, in the quasi-hysterical eruptions of the ‘Dies irae’. Moreover, the
power of the customary spatial separation of the three ‘strata’ of the War Requiem – with the two soldiers exposed in the foreground, the
liturgical consolations of the soprano and full chorus behind them, and the
innocence of the children’s choir placed at an unreachable remove – is
lost; as is the contrast between the chamber orchestra and full symphony,
though the ENO Orchestra gave us clanging colours and vivid textures, and
conductor Martyn Brabbins successfully balanced spaciousness and intensity. 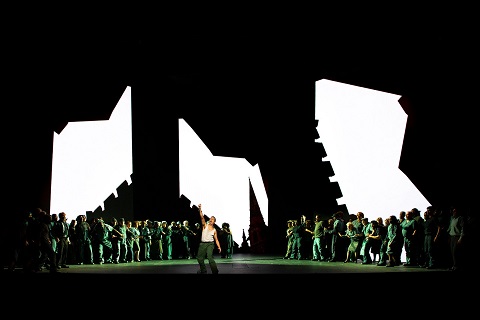 The members of Finchley Children’s Music Group were well-regimented
choreographically and vocally spick and span. Emma Bell’s vivid but
sometimes overly feverish rendition of the soprano solos offered few of the
consolations that we might expect of a celebrant of the Mass. But, tenor
David Butt Philip and baritone Roderick Williams both gave committed and
musically affecting performances. 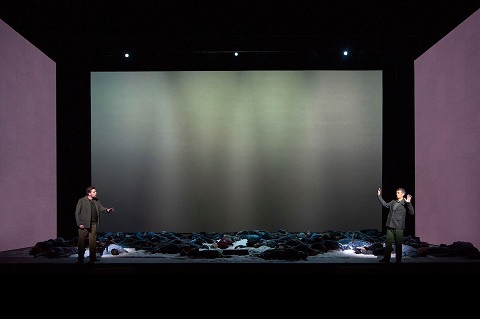 The most powerful moments are those of stillness and simplicity. After some
uncomfortable music-hall style gestures in ‘Out there, we’ve walked quite
friendly up to Death’, which weakened the irony inherent in the music, Butt
Philip and Williams stood motionless in ‘Strange Meeting’, freed from the
horrors of the battlefields they have left behind but trapped, restless, in
a mysterious nightmare. The strength of Butt Philip’s tone betrayed all of
the dead soldier’s bewilderment and disillusion, while Williams’ gentleness
accommodated both the bitterness and pity of the counterpart who rises from
the piles of languishing souls and whose ‘dead smile’ expresses his wry
recognition of the futility of war: ‘I am the enemy you killed, my
friend.[…]/ Yesterday through me as you jabbed and killed./ I parried; but
my hands were loath and cold./ Let us sleep now …’.

Here, surely, was the place for Friedrich’s mutilated men for whom there
are no ‘friends/enemies’ or ‘us/them’, only victim-soldiers, and whose
shattered bodies and faces short-circuit conventional oppositional
narratives of conflict?

Kramer and Tillmans demonstrate care and respect for Britten’s work, but
the result feels oddly passive and distanced. And, they risk, in their
emphasis on the visual at the expense of the verbal and musical, turning
the War Requiem into a film score.