This first revival – perhaps it should be the last – of Barrie Kosky’s
Frankfurt Carmen rather reminded me of Gounod, though in a
different way. What happens, for example, when you take almost the entire
plot out of the opera and you’re left with just the music to hold it
together? What if you don’t really bother staging it at all? And what if
you have the temerity to think one of the great Nineteenth Century operas
needs a little bit of improving here and there?

In a sense it’s obvious where Kosky is going with his Carmen, and
it’s equally obvious he is stripping away decades of production history to
get there. But Bizet is not Kurt Weill – and this is not Weimar Germany
with its hedonism and liberated sexual identities (which I’ll come to
later). Kosky, too, embraces the theatre to such an extent that you
sometimes forget entirely you’re watching opera. The shadow of Bertolt
Brecht looms so heavily over this production it’s not in the remotest a
subtle gesture: Brecht’s concept of theatre was all about fragmenting it,
turning it into incoherence by disrupting the balance of it, and Kosky does
the same. This happens immediately after the Act I prelude – and is a
constant source of invasion throughout the opera – where Kosky replaces
Bizet’s original dialogue and recitative with a spoken narrative. It’s
almost irrelevant who the narrator is – it could be Carmen, but it might
not be – it’s the form of the narration which is a huge problem.
Part-Bizet, part-MÈrimÈe, too often it just sounds like stage directions –
and it stalls the momentum of opera fatally.

Given the allusions to the period, and to the genre, Kosky’s production is
oddly not particularly decadent – in fact, I often felt it came with a
health warning. There’s not a cigarette in sight, and yet the references to
Dietrich in Blonde Venus are unmistakable. Josef von Sternberg’s The Blue Angel, with its themes of cabaret, sexual jealousy and
madness seems startling prophetic as a recurring metaphor throughout
Kosky’s staging – even down to such small details as Carmen’s top hat – but
it also seems codified in incompletion. Kosky might have gone further, but
he doesn’t. You can see parallels between Dietrich’s Lola and Kosky’s
Carmen – not least in the concept of sexual corruption – but you really
want this to be explored more, especially when this is all you have to rely
on for dramatic context.

To the extent that Kosky places the opera in a more liberal sexual age
might actually be the most progressive thing about his production. It is
not Carmen’s hands that are bound, as the libretto suggests, but in Kosky’s
staging a visual depiction that comes closer to shibari. There is a
homoflexibility to the dances, with shirtless males dancing flamenco or
tangos – entirely in keeping with the 1920s. But whether these theatrical,
balletic concepts deflect from the fundamental operatic basis of Carmen remains questionable. The pastiche of whitened faces seemed
just as close to kabuki as it did to the Brechtian construct of theatre
being used for political statement. You could take it either way.

The staging itself is entirely constant – a huge pyramidic staircase that
takes up the entire stage. To suggest this is awkward is an understatement
– from a purely visual point of view it shape-shifts so often you often
feel you’re hallucinating. Only once does it seem to be used for any
startling dramatic effect and that is when Carmen’s huge wedding train is
fanned out like a crÍpe scallop behind her on the steps – an image that
almost recalls Botticelli’s Birth of Venus. Otherwise, it is
simply a means to an end – a staircase for a cabaret show, the arena of a
bullring, the amphitheatre for an audience. 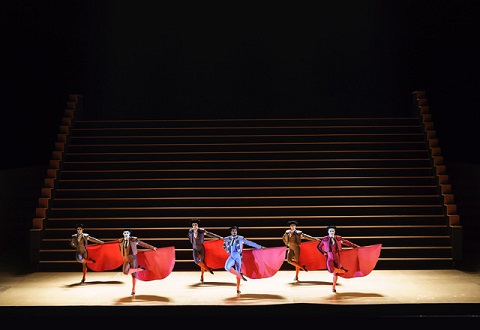 The cynic might argue that Kosky’s production gravitates towards the
theatrical because Michael Rot’s edition of Carmen, which restores
many of the cuts Bizet made, makes this hard to bring off as pure opera.
You get two Habanera for the price of one, the extended version of
Don JosÈ’s Dragon d’Alcala and a marginally altered ending. Not
withstanding the insertion of spoken narration at the expense of the
recitatives, the evening dragged. I don’t think hearing music that was
fundamentally new to most listeners was a significant issue but the
extensive interruption that the spoken dialogue caused – no matter how
evocatively, even smokily, it was phrased by Claude de Demo – was
problematic. You often felt the orchestra were playing in extended
paragraphs, and where there should have been a feeling that every note of
the music was embracing Bizet’s love of melody and intensity you were left
with the impression you were being drawn into Brecht’s theatre of
distanciation.

I’m in two minds about the quality of the singing in this production. It’s
certainly true that the demanding choreography and the stamina required of
the singers in this staging is unusual for Carmen (or, indeed,
would be in any opera outside Wagner). I think this was especially the case
for the Carmen, sung by the French mezzo-soprano GaÎlle Arquez, who
replaced Ksenia Dudnikova at quite short notice. She did have the advantage
of having sung the role during part of last season’s first run of this
production, but nevertheless it must have been daunting given the
complexity she faced. If choreographically her performance was tight, even
accomplished, her voice sometimes seemed to come under strain. But, it’s
always a bonus to hear a French mezzo sing Carmen and the warmth of her
phrasing doesn’t hide the sexuality – or, her own brand of it – that she
brings to the part. This is, however, quite like the distinctive kind of
sexuality that Dietrich brought to the screen: distant, fateful, enigmatic,
perhaps even a little asexual. She is just the right side of convincingly
dangerous, though there is little chemistry between her and Don JosÈ or any
other man she encounters. 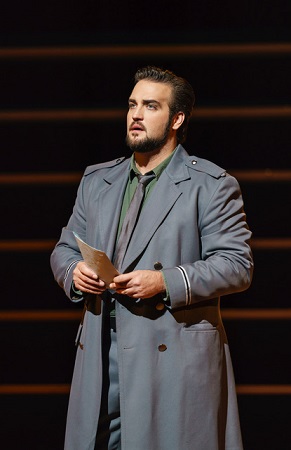 Brian Jagde as Don JosÈ often seemed unforgettable; except when you see him he looks almost dream casting. He’s an imposing stage
presence, but I didn’t find the voice compelling, his tone a little too
bright rather than dramatic. Alexander Vinogradov’s Escamillo was rather
the opposite. Russian basses seem rather in vogue for this role these days,
and the resonance and richness of his voice was perhaps the best thing all
evening in a largely unevenly sung production. His ‘Votre toast, je peux
vous le rendre’ had considerable swagger. Eleonora Buratto as MicaÎla, a
little too fragile for my taste, was secure enough but seemed to come and
go like smoke vapour (had there been any, of course).

The Canadian conductor, Keri-Lynn Wilson, seemed to get things off to a
flying start – quite literally – during the opening prelude when her baton
landed somewhere in the orchestra stalls (and, yes, it seems conductors do
have a spare one to hand) but by-and-large I think what she wanted to
achieve with Bizet’s score was hampered by both Rot’s edition and the
fragmentation imposed on it. Should Covent Garden wish to give us a
traditional staging of Carmen it might seem reasonable to invite
her back to conduct it because when the music had some pace she drove it
forward like a charging bull. It’s evident she knows how to make an
orchestra phrase (and this score is full of opportunities to do that) and
it’s clear she can get the orchestra to play well.

Some will find Barrie Kosky’s Carmen inventive and imaginative
because it dares to offer a new perspective on this opera. The question I
asked myself after I left Covent Garden after the opening night wasn’t so
much what it all meant, but rather why I had found the whole production
such an effort to sit through. I’m certainly not immune to directors
subverting opera into something post-modernist or expressionist, or
challenging assumptions about the art form into something entirely new and
different, but Kosky somewhat lost me when he turned Bizet’s Carmen into a clunky tableau of theatrical – and operatic –
sketches with nothing discernible to give it dramatic impact.

And, never have I felt less guilty about smoking a cigarette after a
performance of Carmen than after this particular production.