Over the years, the Philharmonia, an orchestra which has a particular
affinity for the music of Strauss, has given some memorable concerts of
this composer under Maazel, Sawallisch, Thielemann and Sinopoli – and
Rouvali’s came very close to equalling them. The magnificent playing was
one thing, but this young conductor’s ability to understand what makes
Strauss’s music such an unforgettable experience in the concert hall made
this an event and not just a concert.

Strauss is that rare thing in a composer in that even when he writes purely
orchestral music the feeling that you’re listening to opera never wholly
disappears. Some of his works do better reflect this than others, and some
conductors are much better at negotiating the thickets of notes that can
occlude Strauss’s orchestration. Some have argued (Manfred Honeck, for
example), that even in the operas the true star isn’t the voice but the
orchestra itself. The three works on this programme, however, were notable
for the detailed solos that Strauss writes for individual instruments and
Rouvali was careful to shape those solos. His style of conducting is quite
open to this approach – the left hand is expressive, much as Abbado’s used
to be, although I sometimes found his stick technique to be as vague as I
did Sinopoli’s (this would become less obvious with Sinopoli later in his
career). Rouvali’s sweeping right-hand can seem a little mannered but it
was never less than clear that the Philharmonia Orchestra understood
everything asked of them. And rarely have I seen any orchestra look at their conductor so intently as the Philharmonia did
throughout this concert. Rouvali’s ear for detail is very fine – but I
found myself sat on the wrong side of the orchestra to hear sufficient
lucidity from the harps – a notable feature of Straussian orchestration
that few conductors seem able to get right, especially in Eine Alpensinfonie, the work that ended this concert. Generally,
however, there was a marvellous sense of clarity in the playing – even
allowing for the uncommonly rich lower-strings, and resonant brass, not
always a hallmark of this orchestra’s playing today.

The opening work, Artur Rodzinski’s orchestration of excerpts from Der Rosenkavalier is a strange piece. Completed in 1944, the very
specific rubato of the work adheres reasonably closely to the opera’s
Viennese roots – though when you listen to the suite you constantly long to
hear the voices themselves. Rodzinski’s answer was to give the voices to
the orchestra – so in Act II’s Silver Rose Scene the oboe represents
Sophie, and the clarinet Octavian. The definition of the Philharmonia’s
solo playing here was exquisite, even rather ravishing – much as you’d
expect from this orchestra’s fabulous woodwind section. Ideally, a
conductor should take this music at, or near, an identical tempo to the
lyrics themselves – and Rouvali came close to doing so. The Act II waltzes
were never less than interesting to hear, but didn’t come across as
particularly Straussian – the playing was extraordinarily refined, the
phrasing and opulence of tone so beautifully done that Rouvali somewhat
forgot to conduct them in tempo. At times they just felt very slow, rather
as if a Finnish winter had chilled the ballroom under a layer of ice.
Rouvali found himself back in tempo with the trumpet solo (representing the
consignment of the rose) just before the Trio between the Marschallin,
Octavian and Sophie. The expansiveness Rouvali brought to this music was
not necessarily a problem (many conductors have done so) and he allowed the
Philharmonia strings to soar. There was great intimacy here, but it was
also emotionally driven. Rodzinski doesn’t use Strauss’s original ending to Rosenkavalier – instead supplanting it with another waltz, and
then composing his own closing bars to end the suite on a dramatic, if
bombastic, high note. It was undeniably exciting – if undeniably garish. 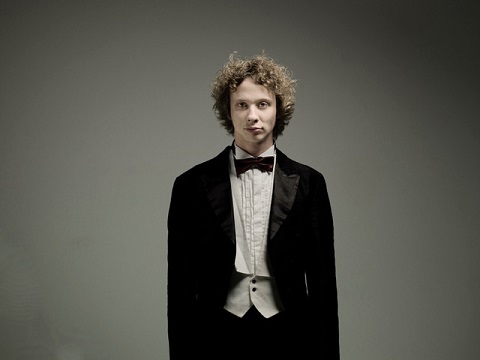 Strauss’s Vier Letze Lieder, sung by the British soprano Sophie
Bevan, was one of the better performances I have heard of this work
recently – even if her German sounded a little unconvincing. What this
performance shared with a memorable one that Sinopoli gave with Jessye
Norman at Salzburg in 1990 was expansiveness – though I think Rouvali got
even finer playing from the Philharmonia on this occasion. In one sense,
Bevan’s is not a huge voice – it’s quite the opposite – and she brought an
unusual intimacy to most of the songs; but she faced a significant vocal
challenge when Rouvali was so apt to linger over orchestral phrases. This
was particularly the case in ‘Beim Schlafengehen’, perhaps the most
difficult of the four songs for any soprano. The long, huge phrases of this
song can often trap sopranos into breaking the longer line – something that
Bevan didn’t do. There was no suggestion she needed to take an unnecessary
breath between the preceding phrase (though when she did, it felt entirely
natural to do so), nor were there any notable problems accenting the words.

‘Beim Schlafengehen’ often feels like a treacherous vocal arc, culminating
in a final stanza of such intensity and sheer beauty that many sopranos
fall at the final hurdle. Its very last line ‘tief und tausendfach zu
leben’ poses the problem of breath control like no other line in these
songs: singers who attempt to take it in a single breath can’t sustain the
length of the note on ‘leben’; Bevan didn’t try to do that, and instead
floated a gloriously phrased final note that simply vanished into silence.
Rouvali played dangerously with his tempo – but the overlapping violin solo
was outstanding.

‘Im Abendrot’, too, had an epic feel to it at the opening, taking us back
to the opening work on the programme, Der Rosenkavalier in how
Rouvali used the orchestra to create an atmosphere that proved unusually
gripping. This all felt just a little darker, a little bleaker, the
resignation more palpable, the uncertainty in the violin and horn solos
just a little tremulous. Bevan struck exactly the right tone – the voice as
mysterious as it was able to embrace solitude and to convey that sense of
finality that ends by asking the question: ‘ist dies etwa der Tod?’

Despite the difficulty of the final two songs of Vier Letze Lieder
– both technically, and interpretatively – it’s often the first two songs I
find sopranos are most ill at ease with in a concert performance.
‘Fruhling’, is slightly more exacting because it has such dramatic force.
Almost minimally scored in comparison with the other three songs – using
just a harp, horns, strings and woodwind – it exposes the singer rather
early on. Bevan didn’t show insecurity in her phrasing – which was assured
enough above the stave – but the brevity with which she ended her last note
on ‘Gegenwart’ was a little unnerving. She was rather more poised and
elegant in ‘September’, the voice stretching over the orchestra like a
Gothic arch. If the autumnal darkness of this song sometimes eludes some
singers, Bevan darkened her voice sufficiently enough that when she sang of
‘Golden tropft Blatt und Blatt’ you felt the colour in her voice was
cinematographic.

Eine Alpensinfonie
is a work which divides opinion: some find it to be bloated, others
Strauss’s greatest orchestral achievement. I’m firmly in the latter group,
and Rouvali’s performance was magnificent. He takes a relatively spacious
view of this work – it clocked in at exactly 55 minutes – but the dramatic
intensity of this interpretation, the epic scale of it, the fluidity of the
pacing and the loftiness of the vision were often extraordinary. That is
not to say, however, that Rouvali didn’t court danger because he sometimes
did. Some of his tempos were dangerously slow, others almost brought this
particular mountain crashing down around him. It was rarely, if ever, a
case of orchestral ensemble being shaky – the Philharmonia Orchestra’s
playing was superb – rather a question of the orchestra going one way, and
the conductor quite another. This made for an exhilarating ascent, and a
performance that will long stay in the memory.

There were advantages to being sat on the same side of the Philharmonia’s
cellos, basses, trombones and lower brass when Rouvali was so intent on
cultivating the deeply expressive sound he achieved here. This was the kind
of broodingly stormy mountain climb that was enveloped in dark clouds
before we ever got to the summit with its thunder and tempest. On the other
hand, Strauss writes so evocatively for the harps that Rouvali wasn’t able
to always make them audible – especially during the climax of ‘Auf dem
Gipfel’ (in my experience, only Sinopoli has ever achieved this in
concert). ‘Gefahrvolle Augenblicke’ was exceptionally well done, and highly
dramatic, but the sense that orchestra and conductor weren’t entirely in
step with one another was palpable. I’m not sure wind machines during the
storm itself had much impact (though the timpani were just thrilling).
Often the performance was at its best during the sublime ‘Nacht’ sections
that bookend the opening and closing of this vast work – the trombone
playing was stunning, Rouvali’s ability to control the low, mysterious
dynamics was magical. The weft of orchestral interweaving brought great
clarity to a work that isn’t always played in such a way. It was all rather
special.

There is a clear chemistry between this young conductor and the
Philharmonia – something of a rarity today. And this concert was a rarity,
too – a Strauss concert which was memorable.