Well, we were the audience at LSO St Luke’s and we were being taken back to
1695 and permitted into a ‘theatre of the mind’. That is, into the feverish
dreams and dramas, hallucinations and hauntings of one Henry Purcell who,
with the shadow of death falling over his tousled bed, revisited the past
and conjured his former self from the archives of memory and nostalgia: son
and father, singer and composer, bon vivant and bereaved child and parent.

Clare Norburn’s latest concert-drama, Burying the Dead, was first
seen at last year’s Buxton International Festival and has since toured the
UK, arriving finally in London for the three-day festival, Baroque at the Edge. What is most impressive about Norburn’s
conception is the way that the various strata and elements combine and
cohere so effortlessly. Past and present, truth and fantasy, real and
imagined come together in a tightly knit and intimate drama. The personal
narrative is embedded neatly within historical, cultural and political
contexts. At LSO St Luke’s, Niall Ashdown’s Henry Purcell, somewhat
dishevelled in night-gown and breeches, took us through an account of his
life – his losses and loves, career and carousing – and so created not just
a portrait of the ‘matchless man’ (to recall the words of John Blow in his
elegiac ode), but also a landscape of seventeenth-century London and a
vision of the age. 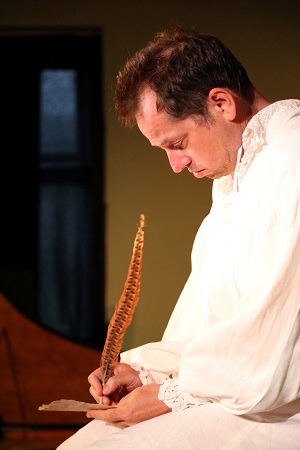 Ashdown captured the restless energy, wit and self-awareness of the
creative genius, snatching up the manuscript paper strewn upon the bedroom
floor when his Muse stirred, frustratedly shaking his quill when the ink
stalled, the mechanics of transcription failing to keep up with the flow of
invention as the music – beautifully played by the three musicians
(harpsichordist Satoko Doi-Luck, viola da gamba player Kate Conway and
theorbist Toby Carr) seated either side of the composer’s bed – raced ahead
of the hand. Expressive of gesture, Ashdown used irony and self-irony with
judiciousness, as when recalling the young composer’s growing success and
pride in having his music performed at the soirees held by
violinist-composer John Banister in his home. These were the first
“concerts” given in London: “I’m sure you’re familiar with the term.
Concerts. They are rather like this, but with less speaking,” Ashdown wryly
observed.

We had tales of derring do, as when Purcell and the other choristers ran
from Westminster to the church of St Dunstan to save it from being consumed
by the flames of the Great Fire; and, of disaster, in the form of a pacy
account of the origins of the conflagration and its passage through the
city, supplemented by asides from the onlookers – “It was started by the
French!”, “No, by the Dutch” – and by the crackles and pops of rustled
paper bags and hand-claps from the musicians. Desire was not absent,
Ashdown joining in tuneful duet with Emily Owen as Purcell courted his wife
Frances. And, various of the singers and actresses, such as Letitia Cross,
with whom Purcell had amorous liaisons passed through his bedchamber,
engaging in ribald banter. 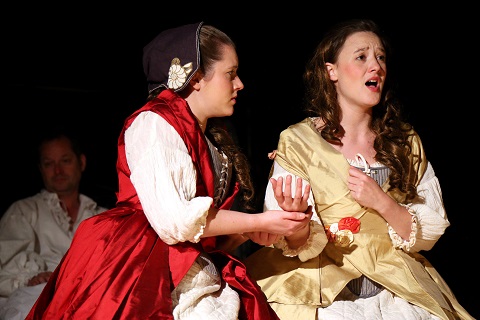 Ashdown shifted swiftly and persuasively between moods, and alongside droll
humour there was also deep sadness: the bewilderment of the five-year-old
boy at the death of his father; the loneliness of the young man whose
beloved Jane disappeared one day from the family home after a change of
personal circumstances; the bereaved father, mourning the deaths of four of
his six children. The ode that he composed upon the death of Queen Mary was
in fact, so Purcell confessed, an elegy not for the monarch but for his own
small babes. Such personal triumphs and tragedies were framed by the
broader context of the political age, as Purcell reflected upon upheavals
and uncertainties of his day, as the culturally rich age of Charles II was
succeeded by the religious unrest of James II’s reign which in turn led to
the Glorious Revolution of 1688 around the crowning of the Dutch William
and English Queen Mary. 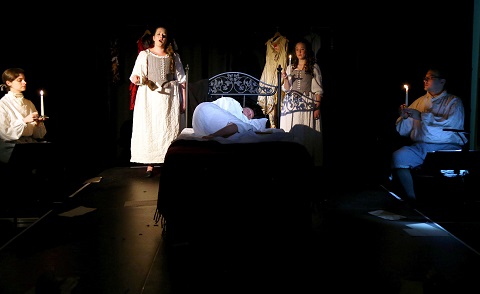 Interwoven into Clare Norburn’s text are assorted instrumental and vocal
compositions by Purcell: bawdy theatre ballads; slow airs such as ‘The
Virtuous wife, or Good luck at last’; joyful celebrations of love such as
‘She loves and she confesses too’; the mad song, ‘From silent shades’, in
which ‘Bess of Bedlam’ mourns in love-sick melancholy; and numbers from the
semi-operas, such as ‘Two daughters of this aged stream’ in which two
sirens, naked to the waist, emerge from a silver stream and beg King Arthur
to lay aside his sword and join them. Emily Owen and Jenni Harper sang with
fine focus and strong dramatic presence, characterising their various
impersonation vividly. And, the three musicians were not left out of the
dramatic action, occasionally putting aside their instruments to
participate in the unfolding narrative.

Director Tom Guthrie has imaginatively and skilfully integrated these
various elements with the simplest of dramatic means and the whole achieved
a directness worthy of Purcell himself. With the audience so close to the
stage, and at times drawn into the action – handed a tankard, strewn with
red petals – the immediacy of the drama was captivating. Indeed, the
integration of drama and song seemed almost to re-create the theatre of
Purcell’s day, to place his songs back within their original context. As
the lights slowly diminished upon the dying phrases of Dido’s lament, we
had been gifted a magical vision of the man behind the music, the very
human soul behind the creative genius.

All photographs by Robert Piwko