Conductor Antonello Manacorda didn’t inject much life or spirit into the
overture: uncharacteristically, the ROH Orchestra seemed drained of colour,
the cellos neither bloomed nor ached, and tempi were sluggish. The
lacklustre opening certainly wasn’t a case of ‘aging’. Eyre’s production
may be 25-years-old but it’s still handsome in conception and design, Bob
Crowley’s sets sculpting gracious spaces.

Violetta’s Parisian apartment has a stylish grandeur which brings to mind
the art deco entrance hall at Eltham Palace – the overarching dome, through
which light seems to burst, highlighting the beautiful veneer and
marquetry. Subsequently, the Act 2 rural retreat exudes classy minimalism
and artistic taste, while the crimson is still pulsing in the gambling
scene, voluptuously lit by Jean Kalman who bathes his frolicking gypsy
girls and strutting matadors in rich hues of complementary red and green.
Then, finally, the vivacity is blanched and bleached for the death scene,
which takes place in a grey, bare room dominated by a huge slanting mirror,
its glass blackened and rotting – a photo negative of Violetta’s inner
physical decline.

These are images and spaces which conjure passion, excitement and fear.
And, given the strong cast assembled it was a surprise that there were few
genuine on-stage emotional frissons in Act 1. There was some fine
singing but even the redoubtable ROH Chorus, while as vocally secure as
always, seemed rather staid and sturdy. Indeed, though on previous
occasions I’ve not been troubled by the way the set often pushes the cast
and Chorus forwards to the fore-stage, throughout this performance there
seemed to be a disappointing predominance of stand-and-sing
non-choreography.

Eyre’s production has had countless revivals with numerous divas in the
title role. The Albanian soprano Ermonela Jaho first stepped into
Violetta’s shoes at Covent Garden when she deputised at short notice for an
indisposed Anna Netrebko in 2008, and she returned to the role here in 2010
and 2012. Internationally, Violetta ValÈry has become one of her most
successful roles. But, in Act 1 Jaho and Charles Castronovo – who was
Jaho’s Alfredo in Paris last autumn – seemed to be singing ‘at’ rather than
‘to’ each other: there was more emotional spark from the central ice
sculpture around which the revellers swirled. 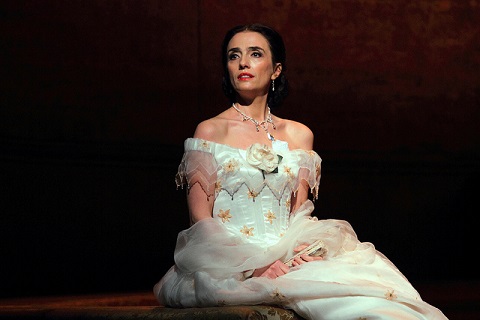 I wondered if I’d simply seen too many Traviatas of late, after
performances by

in the last few months. But, I think my initial disenchantment has a
different root. Jaho is a superb dramatic communicator, but she lacks the
sort of lyric sumptuousness that can convince us of Violetta’s captivating
allure – such as is required in ‘Ah, fors’ Ë lui’ and ‘Sempre libera’,
which Jaho approached somewhat tentatively. Conversely, the more infirm and
fractured Violetta becomes, the more credible is Jaho’s communication of
physical and mental vulnerability through vocal slenderness – her frailty,
of body and utterance, is compelling. We might expect a singer to use
colour and muscular strength to shape a line, phrasing and projecting to
convey character; Jaho’s expressive impact seems to be achieved by the
inverse. Her tone is rather monochrome, but she can withdraw her soprano
until it is the merest whisper – the scant thread which holds Violetta in
this world, as the afterlife beckons. And, it is breathtakingly
beautiful and touching at times, if occasionally repetitive.

That said, Violetta’s Act 3 demise was heart-breaking. Every tremor, every
brief flame, was piercingly emotive. If her Act 2 exchanges with Alfredo’s
father were less successful, than that is partly owing to Igor
Golovatenko’s inflexible phrasing and overly pressing sound: the tone was
strong and true, but it was unwaveringly loud, and this Giorgio Germont
came across as a heartless patriarch whose condescension and cruelty – his
iron-rod back, and iron-hard delivery – simply overwhelmed Jaho’s brittle
delicacy. Golovatenko was more dramatically effective in his subsequent
exchanges with Castronovo. And the latter, if he seemed to be lacking the
party spirit in the Act 1 brindisi, was chillingly vicious in his
humiliation of Violetta in the gambling scene, conveying a truly hurting
heart battling with spitefulness. 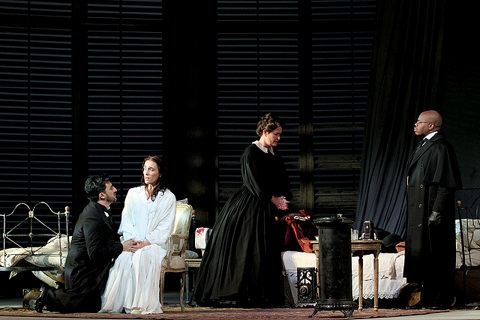 Overall, though, this was effectively a one-woman show. There were
consistent, well-considered performances from Catherine Carby as Annina,
and Simon Shibambu as Doctor Grenvil. And, the two Jette Parker Young
Artists also impressed: Aigul Akhmetshina was a vivacious Flora, while
Germ·n E. Alc·ntara showed confidence and presence as Baron Douphol.

But, it was Jaho who, in Acts 2 and 3 at least, commanded and demanded our
attention. If a wrenching portrait of physical and psychological demise is
what you’re after, this is a Traviata for you. There are, however,
two casts for

, and Angel Blue and Pl·cido Domingo may throw some different ingredients
into the mix.