– which runs from 27th March to 29th April – sung by a superb cast of
soloists, or by the appearance of Joanna Lumley as the ‘narrator’ reading
June Chichester’s recitative-replacing inter-aria text?

For, the evening’s performance was an “experiment”, one which, according to
Katie Hawks’ programme article, “dipped in the waters of authenticity” by
following the practice of German opera houses in Handel’s day of singing
the recitatives of opera seria in the native language, while
retaining the original Italian text of the arias. Here, though, the Italian
recitative was done away with altogether, replaced by spoken English
summaries which were “intended to convey the drama better”.

Certainly, the romantic entanglements of Alcina do require
intricate unravelling. The opera premiered at Covent Garden in April 1735
during Handel’s first season at the Theatre Royal and presents episodes
from Ariosto’s Orlando furioso in which the eponymous Sorceress
lures heroes to her enchanted island, quickly becomes disenchanted with
their merits and charms, and so casts spells which turn her former lovers
into animals and trees, rocks and streams. The virtuous Bradamante –
disguised as her brother Ricciardo – arrives on the island with her friend
Melisso to rescue her fiancÈ, the bewitched Ruggiero.
Complications ensue when Morgana, Alcina’s sister who is loved by the
Sorceress’s steward, Oronte, falls in love with ‘Ricciardo’. Her jealousy
aroused, Alcina sets out to turn the latter into a wild beast. Magic rings
and Ruggiero’s moral awakening intervene, and the Sorceress finds herself
suffering the afflictions of true love.

This drama, somewhat absurd and sometimes confusing, is presented in the
recitatives; and, even if one does not understand the sung language, one
can appreciate the tenor of the situation and action, the changing nature
of the relationships, the pace of the drama. The recitatives provide the
contexts for the emotional effusions of the arias. And, they provide
contrasts of musical colour. Take them away and you’re left with the jewels
without a chain to thread them together. 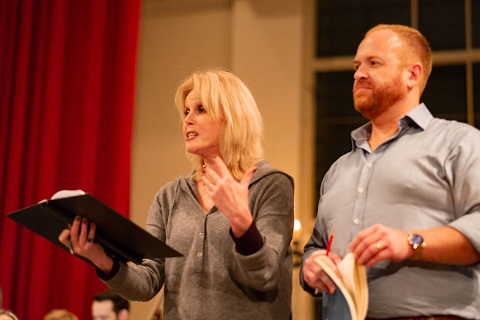 Descending from her armchair-throne behind the instrumentalists, Joanna
Lumley read June Chichester’s text – which often seemed simply to summarise
the arias – with judicious lip-curling, eye-brow raising wryness.
Occasionally she addressed a singer directly, at other times she
re-positioned a music stand in advance of an aria. But, despite the clarity
and nuance of her delivery (was amplification really necessary?), the
musico-dramatic focus and momentum drooped during the spoken text.
Conductor David Bates worked tremendously hard to drive the drama forwards
and drew playing of tremendous rhythmic Èlan and textual clarity from La
Nuova Musica. But, the performance didn’t have the sort of dramatic fluency
that can carry the listener through the admitted irrationalities of some of
the libretto’s romantic muddles and misunderstandings. I wasn’t convinced
that the ‘experiment’ clarified the action, and the omission and
re-ordering of some arias did not help in this regard.

John Caird (who is an Honorary Associate Director of the RSC and Principal
Guest Director of the Royal Dramatic Theatre, Stockholm) was billed as the
‘director’, but I struggled to discern his contribution. The singers, most
of whom used scores, simply did what good singers do; that is, respond
naturally to the dramatic situation through voice, gesture, manner. They
sang their arias in turn, sometimes standing amid the instrumentalists,
sometimes behind them, often seated – unfortunately so in the latter case,
given the poor sight-lines in SJSS. Even a simple lighting design would
have enhanced our sense of the mystery and menace of Alcina’s fantastical
realm, of the Sorceress’s struggle to control her victims and to understand
the growing affections of her own heart. And, her devastation when both her
magic powers and her former lovers, restored to human form, have vanished,
leaving her alone and bereft. There was an elaborate display of candles
above the seated singers at the rear, but it wasn’t clear what this was
supposed to represent or evoke. 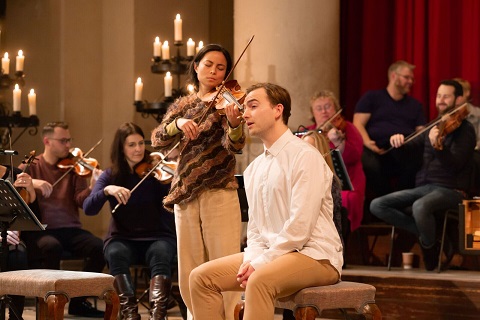 Fortunately, the musical performances more than made up for these
frustrations. Particularly impressive was countertenor Patrick Terry who
conveyed both Ruggiero’s initial boyish need for reassurance and affection,
and his subsequent self-knowledge when he comes to appreciate the emptiness
of his earlier happiness. Handel’s original Ruggiero, the castrato Giovanni
Carestini, so the story goes, was dissatisfied with the simplicity of the
plaintive ‘Verdi prati’ – in which Ruggiero recognises that the beautiful
green island is an illusion which will soon dissolve into a barren reality
– and sent it back to Handel, whose riposte was that if Carestini didn’t
sing the aria he would be paid nothing. I admired Terry’s singing when I
first heard him perform in the

(when he won the Song Prize), and the fullness of his tone and smoothness
of line that I noted on that occasion have grown even more beguiling.
‘Verdi prati’ was the emotional heart of this performance, in which
Ruggiero’s regret was enhanced by leader AnaÔs Chen’s exquisite violin
solo, but Terry was just as stirring in ‘Sta nell’Ircana’ – to which the
natural horns of Anneke Scott and Joseph Walters offered a vibrant,
colourful complement – phrasing the exuberant runs stylishly and powering
sonorously to the final cadence. 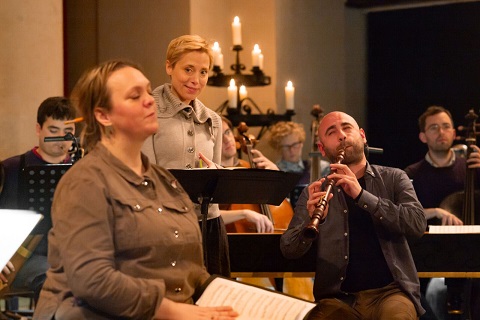 Rebecca Bottone was a characterful Morgana, her upper register shining.
Morgana’s initial mischievous flirtatiousness was engagingly embodied by
oboist Leo Duarte’s juicy obbligato, while the expressive phrasing of
Morgana’s later plea for forgiveness was complemented by the gracious
muscularity and plaintiveness of John Myerscough’s cello obbligato. Not
surprisingly, Christopher Turner’s Oronte could not resist his wayward
beloved’s entreaties, the nuanced legato line of his subsequent ‘Un momento
di contento’ expressing the assuagement bestowed by true love. As the
hollow-hearted Sorceress, Lucy Crowe sang with characteristic liquefaction
and limpidity, but while Crowe’s elegance was unwavering, at times I found
her tone rather ‘white’, and not fully expressive of Alcina’s wide-ranging
emotions.

As Bradamante, Madeleine Shaw conveyed a feminine warmth beneath
‘Ricciardo’s’ vengeful anger, and baritone William Berger – who, like
Terry, sang from memory – projected Melisso’s single aria well, displaying
strength at the bottom of his range, and rising easily with even colour. I
look forward to hearing both Berger and Terry again when they join the cast
of Berenice, at the ROH’s Linbury Theatre, during the forthcoming

This performance of Alcina was warmly appreciated by the SJSS
audience, and certainly whetted the appetite for this year’s LHF. But,
oddly, the real ‘enchantment’ on this occasion occurred during the
instrumental obbligatos, which were performed from memory with the solo
players moving forward to participate in the ‘action’; here was real
musical magic.