Quite, one might remark, upon seeing Stefan Herheim’s production of The Queen of Spades, first seen in Holland in 2016, and now given
its UK premiere at the Royal Opera House.

Tchaikovsky’s letter to his brother Modest illustrates how boundaries
between the real and imagined can be breached, with, perhaps, a conflicting
mix of positive and negative artistic and personal consequences: ‘It seems
to me that Hermann was … all the while a real, living human being, at the
same time sympathetic to me … because Figner [the lyric-dramatic tenor
Nikolai Figner who created the role of Hermann in The Queen of Spades at its premiere on 19th December
1890 at the Maryinsky Theatre in St Petersburg] is very sympathetic to me …
I also felt the most lively concerns for his misfortunes. Now I think this
warm and lively relationship with the opera’s hero has probably expressed
itself beneficially in the music’.

Opera as life, then. This is Herheim’s starting-point. The text projected
onto a front-drop in the silence before Act 1 commenced reminded us of
Tchaikovsky’s repressed homosexuality and consequent suffering, and of his
death by cholera – a possible suicide-by-polluted-water, it is inferred, to
prevent the revelation of his sexual proclivities and activities.

There are few, surely, who would deny the connections between life and art.
And, in his recent book, Disordered Heroes in Opera, musicologist
and psychiatrist John Cordingly cites the view of scholar Robert Layton
that ‘Perhaps in Hermann, [Tchaikovsky] saw something of himself, unable to
escape Fate and almost imprisoned by its inevitability’, and suggests that
‘Hermann’s sudden passion for Liza could even be seen as an attempt to
resolve his latent homosexuality by a hasty marriage that could never
work’: an allusion to Tchaikovsky’s own aborted marriage with Antonina
Milyikova. Alternatively, Cordingly posits that perhaps, ‘Liza ‘stands in’
for a male lover, and he/she has to die as there can be no future in a
homosexual relationship’.

Such theoretical and scholarly speculations are transformed into unyielding
dramaturgical principles in Herheim’s production. The director re-imagines
the opera as a fervent dream – at times a psycho-sexual fantasy – in the
mind of Tchaikovsky. He inserts the composer, embodied by baritone
Vladimir Stoyanov, into every scene, and suggests that the opera is being
created in ‘real time’. To hammer this point home, ‘Tchaikovsky’
hyperactively waves and waggles his arms, ‘conducting’ the sound he
imagines/we hear, vigorously plucks up his quill and scribbles on outsize
manuscript sheets, and seats himself at the ebony grand piano offering in
his keyboard excursions a fair impression of Liberace. It’s so
cringe-making that I wondered if that was indeed ‘the point’: that this
histrionic physical representation of creative invention and expression was
a parody of the melodramatic self-dramatisation of the mythic Romantic
artist … but I think that would be too subtle for a production that
slathers on its concepts with a trowel. 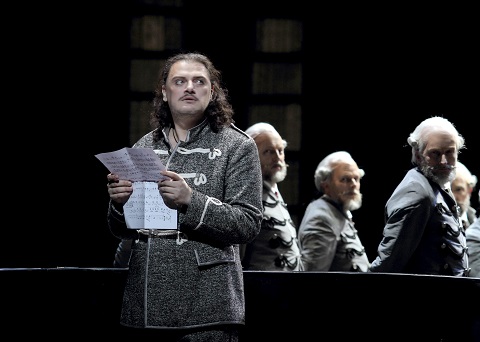 What makes the hyperactivity all the more infuriating is that it goes on,
and on, and on … why doesn’t Herheim trust us to get the point during the
overture and opening scene. Here ‘Tchaikovsky’ humiliatingly pays a man,
who turns out to be Hermann, for the previous night’s homoerotic encounter,
and then collapses in a psychosomatic fit of self-castigation and disgust,
falling on the floor beside a bird cage from which emits Mozart’s ‘Ein
M‰dchen oder Weibchen’. Presumably, the parakeets represent the composer’s
own caged spirit; though Herheim might reflect on the fact that the
implication of his own production is that it is in fact the bars of the
cage which inspire the composer’s song: repression feeds creative expression. Whatever, it’s all irritating,
fussy and messy. It didn’t help that a gentleman seated just across the
aisle from me in the stalls seemed inspired by ‘Tchaikovsky’s’ arm-flapping
so as to indulge in his own air-conducting throughout the performance.
There was no escaping the (non-)rhythmic air-beating. 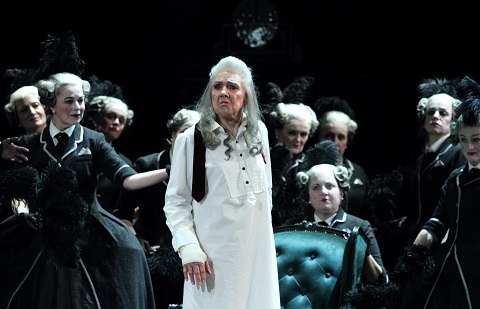 It is baritone Vladimir Stoyanov who embodies the opera’s composer,
alongside his minor vocal role as Liza’s fiancÈ Prince Yeletsky, a role not
present in the original Pushkin tale. And, it should be noted first and
foremost that Stoyanov sang the latter role beautifully, injecting dignity
and gravity into the surreal and hyper-real bizarreness of the production,
and communicating real human feeling in a production where
exaggeration, excess and subversion are the norm. But, the perpetual
presence of ‘Tchaikovsky’ in scenes which establish the emotional tenor of
the situations and relationships in Puskhin’s tale (yes, there is
a actually a dramatic ‘narrative’, one that gets rather side-lined here) is
a hindrance to dramatic coherence and consistency. In Act 2 Scene 1, when
Liza arranges a nocturnal assignation with Hermann in order to give him the
key to her grandmother’s room, so that he may access her own, it’s
infuriating that the would-be lovers address their remarks to the composer
scribbling their melodies rather than to each other; at one point
Tchaikovsky seemed to morph into Yeletsky, and I was put in mind of
Princess Diana’s quip that there “there were three of us in this marriage,
so it was a bit crowded”. When Liza splutters to Tchaikovsky/Yeletsky,
“You, you here?”, I wanted to add, “my thoughts entirely”. Tchaikovsky
turns up in every scene. Anna Goryachova’s Paulina massages his shoulders
during her sad ballad; when Hermann fears the arrival of the Angel of Death,
Tchaikovsky turns up, pointing a pistol.

The design is no more coherent. The majority of the action takes places
within Tchaikovsky’s music room, the grand piano omnipresent even as the
dramatic locations changes (the populace’s eulogising of the unseasonable
sunshine and fears of the storm don’t make much sense when we’re confined
indoors), and the panels laden with books and scores swivel and slide into
new formations. Which century are we in? Philipp F¸rhofer’s sets suggest
Tchaikovsky’s own age, but the Act 2 Mozartian pastiche shifts us to the 18 th century, for a masked ball which morphs into psychedelic
madness. The enormous chandelier swings pendulously, smoke billows, lights
flicker and the chorus’s limbs quiver – though one has to admire Bernd
Purkrabek’s bristling, buzzing lighting design.

Satyrs-cum-San Sebastian arrive, their modesty protected by loin cloths,
their bodies pierced by quills (what else?). The divertissement dives
further with the arrival Milovzor (Goryachova) and Prilepa (Jacquelyn
Stucker) decked out in imitation of Tchaikovsky’s caged birds. This pseudo
Papageno/Papagena pair, resplendent in blue and red plumage, indulge in
sexual shenanigans with each other and with Tchaikovsky, and the
psychological chaos culminates with a hymn of praise thundered out to
Catherine the Great by the chorus, lining the stalls’ aisles –
ineffectively trying to get the audience to stand in homage and join in the
game – as, on stage, Tchaikovsky leans to kiss the Empress’s hand, only to
find that he’s slobbered over the palm of Hermann-in-drag. Distorted glass
reflects the auditorium back at the audience. Virginia Woolf essayed a
similar essay with shards and fragments at the end of Between the Acts, but on this occasion the general response seemed
to be annoyance and alienation rather than discomforting complicity. 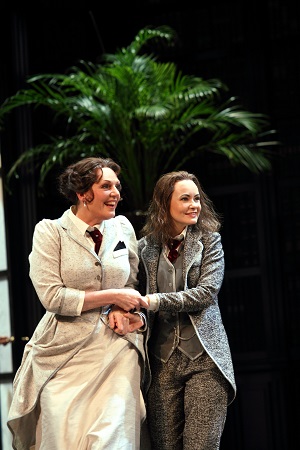 Such redundant excess left one feeling rather out of breath. So, to turn to
‘important’ matters, what of the singing? John Lungrend’s Count Tomsky
delivered an excellent narration of the history of the Countess and the
cards – thank goodness that some of Pushkin’s tale survived – and Felicity
Palmer, despite the travesties of manner and mode infliction upon her,
delivered a wonderfully nuanced and daringly pianissimo
reminiscence of her youth in ‘Je crains de lui parler la nuit’, supported
by skilfully coloured accompaniment from the ROH Orchestra (some terrific
bassoon playing!).

Elsewhere, things were more uneven. The first duet for Goryachova’s
be-trousered Paulina and Eva-Maria Westbroek’s Liza skidded off the rails.
Both found their feet subsequently, but Westbroek’s voice doesn’t seem to
have retained its winning bloom, which further weakens our sympathy for and
understanding of the central characters; some of the soprano’s final
episodes were quite unyielding and hard.

The biggest disappointment was Aleksandrs Antonenko’s Hermann: there were some moments of vocal beauty, particularly in the middle of
his voice, but all too often the tenor sounded ragged and raw. His solution
when he couldn’t reach the top was to shout, approximating pitch. Perhaps
such ‘roughness’ was designed to convey Hermann’s emotional agonies? But,
Hermann came across as not so much unstable as unhinged: certainly the
lurches between pitches and vocal hues were as disconcertingly disruptive
as Hermann’s staggering between elation and despair. It was difficult to
identify with this Hermann – though perhaps this was not solely Antonenko’s
fault, given that he was called upon to impersonate a male prostitute and
Catherine the Great.

Pappano found bold orchestral colours and strokes – trombones, celli, harp
all came effectively to the fore; and the overall sweep was persuasive. The
(expanded) ROH Chorus were on fine form, but I got fed up with their
taunting toasts to Tchaikovsky, tumblers of chilled water sloshing with
impure infection – drink up your cholera!

Pushkin’s narrative is not complemented, enriched, or opened up to
potential new meanings by Herheim’s psychoanalytical indulgences; it is
just annihilated. There are no cards, no supernatural horror, no real human
love. In reply to Madame von Meck’s question as to whether Tchaikovsky had
experience ‘non-Platonic love’, the composer replied: ‘If … by asking
whether I’ve experienced full happiness in love, then the answer is no, no,
and no again!!! … But if you ask me whether I appreciate all the power, all
the inevitable force, of this emotion, then I’ll answer yes, yes and yes
again, and I would say again that I’ve repeated tired to express lovingly
in my music the torments and bliss of love.’

What a pity that Herheim neglects such bliss, such human consolation, in
favour of over-blown psychoanalytical blustering.

Tchaikovsky: The Queen of Spades