Scholar, poet and cardinal Pietro Bembo (1470-1547) may have been a
promoter of humanism – and thus a seminal influence in the development of
the Italian madrigal in the early sixteenth century – but his words to his
daughter reflect the inverse relationship between music-making and female
chastity held in his day.

,
seeks to give those women who have been silenced their musical voice: over
the next twelve months, Venus Unwrapped will offer more than sixty
opportunities to enjoy diverse music by more than one hundred female
composers from the Middle Ages to the modern day – music ‘from Anna
Meredith to Florence Price, Rafaella Alleotti to Rebecca Clarke, Barbara
Strozzi to Sona Jobarteh, Fanny Mendelssohn to Pan Daijing, Kaija Saariaho
to Nikki Yeoh, Cara Dillon to Cate Le Bon’.

The festival launched with a highly expressive performance by the Orchestra
of the Age of Enlightenment, directed by Christian Curnyn, of music by a
‘star of Venice’, Barbara Strozzi (1619-77) – described by her father,
Giulio, as a virtuossisima cantatrice. Strozzi was undoubtedly not
the only woman participating in music-making and producing her own
compositions during the seventeenth century. Travellers to Italy frequently
reported their admiration for the musical accomplishments of the women they
met, but there are certainly more references to women such as the daughter
of Paduan Domenico Bassano who, so the English traveller John Evelyn wrote
in 1649, sang and played nine instruments ‘with that skill and addresse
that few master in Italy exceeded her’, and ‘likewise compos’d divers
excellent pieces’, than there are extant manuscripts of such ‘excellent
pieces’. Excepting the slightly older Francesca Caccini (1589-c1640),
Strozzi seems to have been one of very few women of the period who pursued
a professional career as a composer.

Conducting some preparatory research before this performance, I was wryly
amused to come upon an article by scholar Judith Tick written in 2012, in
which she reflected on the publication twenty-five years earlier of Women Making Music: The Western Art Tradition, 1150-1950,
which she edited with Jane Bowers. Tick recalls handing the manuscript to
the academic board of the University of California, prompting a tart
response from a ‘cranky composer’: “‘The Voice of Barbara Strozzi?’” he
scoffed. “Why not ‘The Voice of Barbra Streisand’?”, in reference to a now
esteemed article by Ellen Rosand. Tick goes on to relate, ‘I was in France
in the summer of 1985 when I saw the cover of the book for the first time.
There was bosomy Barbara Strozzi, front and center.’

So, who was Barbara Strozzi? Born in 1619, in Venice, to poet and opera
librettist Giulio Strozzi and his housekeeper, Isabella Garzoni, Strozzi
was formally adopted by Giulio in 1628. Her father was one of the most
influential Venetian literati of the first half of the seventeenth century.
A member of the Accademia degli Incogniti (Academy of the Hidden
Ones), he was at the cutting edge of the radical development of new styles
and forms of musico-dramatic expression, and worked with many composers,
including Monteverdi. Barbara, by the age of sixteen, had attained a
reputation as a virtuoso singer: in 1635 and 1636, Nicolo Fontei dedicated
two sets of songs to Strozzi whom he said ‘possessed a voice like Orfeo …
and a bold and graceful manner of singing’. In 1637, Giulio founded the Accademia degli Unisoni, presumably in order to showcase his
daughter’s talents, and thus Barbara became acquainted with the theoretical
and intellectual debates of the cultural elite of Venice. In 1638, the same
year that Monteverdi published his eight book of madrigals,Madrigali Guerrieri e Amorosi, Giulio Strozzi publishedVeglie de Signori Unisoni – essays which document the Unisoni’s discussions and provide evidence that Barbara, who
studied with Cavalli, had composed and performed her own songs by the time
she was nineteen.

On October 12, 1644 Barbara published Il Primo de Madrigali a due, tre, quattro e cinque voci, setting
texts by her father. This was the first of eight volumes of vocal works –
chiefly secular madrigals, arias and cantatas – which she would publish
over the next twenty years, and it was largely from this first volume that
the OAE drew the items which comprised the first half of their programme.

What struck me most was the variety and adventurousness of the madrigals
presented. Strozzi’s appreciation of the power of musical rhetoric, and her
melodic invention, were plainly evident, but more than this it was the
diversity of texture and style, and the radical disruptiveness of both her
text-settings, which often seemed to pull against the natural rhythm of the
poetry, and her exploitation of dissonance. In the dedicatory note to her
Op.1, Strozzi commented, ‘I must reverently consecrate this first work,
which as a woman, I publish all too anxiously, to the Most August Name of
Your Highness, so that under an oak of gold it may rest secure against the
lightning bolts of slander prepared for it’. If she did not have much
optimism about the likely reception of her work in 1644, by 1656 she had
achieved renown and acceptance – works by her appear in collection
alongside Francesco Cavalli, Horatio Tarditi, Maurizio Cazatti and others –
and these madrigals showed why. They were performed with vivid
expressiveness by the singers and instrumentalists of the OAE, too; a
handsome ensemble sound was formed from strongly characterised individual
voices and the carefully observed nuances of instrumental composition and
texture made for considerable refinement.

‘L’amante modesto’ (The modest lover) (‡ 5) made for a vibrant opening, the
strongly defined vocal lines bristling with the drama and intensity of the
poetic argument, supported by varied instrumental groupings with Elizabeth
Kenny’s theorbo elaborations at their heart. Kenny switched to chitarrone
for ‘Pace arrabbiata’ (Peace in anger), which danced with vigour as the
indignation of the three male singers at the haughty aloofness of a ‘cruel’
woman was captured by the wide expanse between the high tenor line and
bass, Nicholas Mulroy agilely and strongly ascending to the peaks of the
former.

The ladies had their own trio, ‘Le Tre Gratie a Venere’ (The Three Graces
to Venus), in which Miriam Allen, Zoe Brookshaw and Helen Charlston blended
with sweetness and sensuousness, supported by rich harmonies, with Joy
Smith’s harp to the fore. The flexibility and the fluency of the vocal
lines was admirable here and in ‘Canto di bella bocca’ (Song from a
beautiful mouth) in which the voices of Allen and Mulroy swayed towards and
then pulled against each other in exquisite rhetorical design, enhanced by
Kenny’s musicianship and Strozzi’s heart-twisting suspensions. The
dissonance of the final line embodied the pleasure-pain paradoxes of the
text, only partially eased by Kenny’s gentle closing tierce de Picardie. 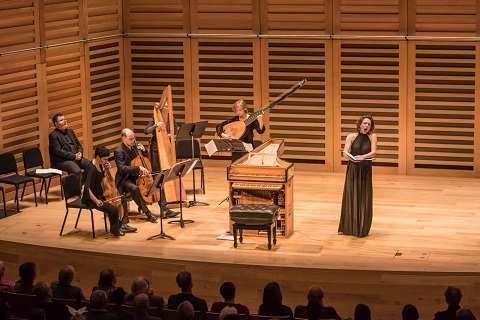 Mary Bevan’s two solo items represented the apex of Strozzi’s
musico-rhetorical majesty. In ‘Lagrime mie’ (My tears) from Diporte di Euterpe the harmonic piquancy and rapidly changing
timbral contrasts of the accompanying ensemble (theorbo, lirone (Emilia
Benjamin) and two violins (Rodolfo Richter and Jane Gordon) complemented
the declamatory distress of the vocal line, the angularity and expressive
fioritura of which Bevan imbued with dramatic colour, though the soprano’s
diction wanted for clarity – which was a pity because the way in which
Strozzi fractures the text in order to emphasise Lidia’s pain at her
father’s cruelty is a powerful element of the rhetorical impact. In ‘»
pazzo il mio core’ (My heart is crazy), Bevan flew lightly through the
melismatic excursions and injected real anger into her tone at the close,
anguishing at the foolishness of a heart that ‘torments itself in a cruel
flame’ (E come tal si cruccia in fiero ardore).

The closing item of the first half, Silentio novice (Noisome
silence) brought together Zoe Brookshaw, Martha McLorinan, John Bowen and
Jonathan Brown and gently lulled us with its ‘songs of our loving hearts’
(le parole affettuose e I canti).

Monteverdi’s eighth book of madrigals, published during his Venetian years
when the composer was seventy-one years of age, drew on two decades of
composition and is essentially a summary of the development of the
madrigal. Each of the Book’s two halves, Canti guerrieri (Songs of
War) and Canti amorosi (Songs of Love), ends with a ballo
, composed for a specific occasion: ‘Volgendo il ciel’ was written in 1637
in honour of the Holy Roman Emperor, Ferdinand III of Hapsburg, and Il ballo delle ingrate, first heard in 1608 at the wedding
festivities of Francesco Gonzago, was rewritten for Vienna in 1628 and
finally published in 1638.

In ‘Volgendo il ciel’ Nicholas Mulroy was a compelling and commanding
‘Poet’, complemented by a voluminous choral ensemble and instrumentalists
whom the Poet addressed directly on occasion. The full ensemble, including
two violas (Jan Schlapp and Annette Isserlis), cello (Andrew Skidmore) and
violone (Cecelia Bruggemeyer) gathered for Il ballo delle ingrate,
which upholds a long-lived tradition of exemplifying what will happen to
women who don’t behave as they should. Venus, troubled because
Cupid is failing to hit the target, travels to the Underworld to urge Pluto
to make an example of those ungrateful women who reject male desire, and so
the latter are led through a flaming bocca d’inferno in order that
the female members of Monteverdi’s contemporary audience might gain of the
glimpse of the punishment that will await them should they deny their
men-folk their due satisfaction. Federico Follino, a court
chronicler in Mantua in 1608, wrote that the singer performing the role of
Pluto moved ‘with great gravity towards the princesses who were in view
facing the stage; once he had approached them, full of horrid majesty, he
began to sing’. Clearly, he wanted to make sure they’d got the message!
However, one ingrate, defying Pluto’s order compelling passive silence and
submission, sings a lament which inspires her fellow ‘cruel Beauties’ to
plead for pity.

Follino’s account of the Mantuan performance attests to its vivid
theatricality: ‘In the middle of the stage one saw the large mouth of a
wide and deep cavern … surrounded within and around by burning fire and in
its darkest depths, in a part very deep and distant from its mouth, one saw
a great abyss behind which there rotated balls of flames burning most
brightly and within which there were countless monsters of the inferno so
horrible and frightening that many did not have the courage to look upon
it.’

There were no flames or monsters at Kings Place but there was drama
aplenty. The contrast between brightness of Zoe Brookshaw’s Cupid and the
darker hues of Helen Charlston’s Venus, supported by the grainy warmth of
the instrumental ensemble made for an engaging opening duet, and Venus’s
anger at feminine betrayal – the women have scorned Cupid’s arrows and
their own men’s heroism and honour – was strongly and richly delivered:
‘Udite, donne, udite i saggi detti di celeste parlar nel cor serbate’
(Listen, ladies, listen, keep the wise sayings of heavenly speech in your
heart). David Shipley was a grave Pluto, supported by Curnyn’s sensitive
organ accompaniment, sustaining the god’s dignity and lyricism throughout
his long arioso moralising.

Mary Bevan’s delivery of the final lament recalled the dissonant intensity
of Arianne’s threnody and there was stirring defiance as this solo ingrate
interrupted the silent progress of the suffering women, rejecting Pluto’s
order to return to hell and weep.

‘Loquacity cannot be sufficiently reproached in women, as many very learned
and wise men have stated, nor can silence be sufficiently applauded.’ So
wrote Francesco Barbaro, in his 1555 treatise on wifely decorum and duty,
which was composed for the wedding of Lorenzo de Medici. But, at Kings
Place, a side door opened, and four off-stage ingrates echoed Bevan’s
lament in gratingly dissonant fashion: ‘Apprendate piet‡, donne e donzelle’
(Learn pity, ladies and girls).

So, Monteverdi gave the women the last word.

image=http://www.operatoday.com/Viktor%20Erik%20Emanuel%20VU%202.jpg
image_description=
product=yes
product_title=Venus Unwrapped: Barbara Strozzi: Star of Venice
product_by=A review by Claire Seymour
product_id= Above: members of the Orchestra of the Age of Enlightenment, directed by Christian Curnyn