I’m not sure that Richard Jones’s new production of Leoö Jan·?ek’s K·t’a Kabanov· addresses, or solves, these questions, but it
certainly made me reflect upon them.

By chance, earlier in the day BBC Radio 4’s Woman’s Hour programme
had debated ‘only-ness’: the feeling of being the only one to think, feel
or act in a particular way – at work, within the family, amongst one’s
peers or social groups. As Jones’s front-drop, embossed with a photo-image
of a young girl – her wide eyes brimming with energy, the bird she clutches
on the verge of sky-bound release – rose to reveal a young woman, head
bowed, seated on a park bench in the centre of a bare expanse, ‘only-ness’
seemed an apt term.

And, so, Jones gives us a crowd. They rush hither and thither, circling
wildly, sometimes on bicycles, regardless of what the orchestral episodes
are ‘saying’, though sometimes the movements cease, frozen by the grip of
Lucy Carter’s lighting, and we can hear Jan·?ek’s instrumental music sing
K·t’a’s inner song. Society turns its back on K·t’a, an outsider; then,
feasts its eyes on her beauty – as three swarthy men peer and leer through
the windows of the Kabanov· house, forcing K·t’a to tug the curtains
closed, trapping her even more claustrophobically within her suburban,
late-Cold War prison.

For Jones and his designer, Antony Mcdonald, update the action to the
1970s. When, at the start of Act 1, a half-wall descends near the front of
the stage we enter a world of prevailing Stalin-esque ugliness. Stale
yellows and browns reek of cheapness and a socio-cultural aesthetic bereft
of life, love and soul; a menacing threat to K·ta’s own beauty of spirit.
But, the time-shift is not wholly satisfactory: in the ’70s would the
persecuted, adulterous K·t’a feel compelled to undertake a guilt-driven,
self-flagellating public confession, propelled by the forces of social
disapprobation and disgust?

If it’s impossible to answer such a question then Jones doesn’t help by
removing the opera’s religious symbolism and context – the libretto’s birds
are, after all, both symbols of freedom and angelic emblems. Here, the Act
3 confession does not take place in a church, but rather in a bus shelter
where the populace are sheltering from the meteorological frenzy: a refuge
that put me in mind of the seaside shelter in which – in 1921, the year in
which Jan·?ek’s opera was premiered in Brno – T.S. Eliot had sat,
recuperating from a nervous breakdown, writing Part III of The Waste Land. ‘On Margate Sands./ I can connect/ Nothing with
nothing./ The broken fingernails of dirty hands./ My people humble people
who expect/ Nothing.’ 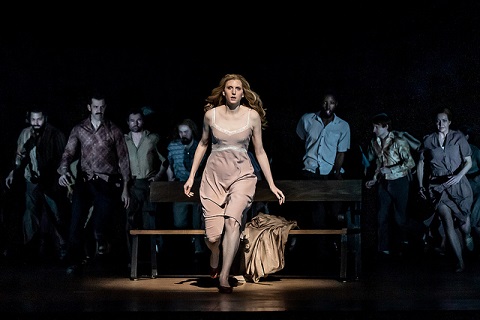 Quite. And, as if to push home the existential misery, in this production
Jones often dispenses with context altogether and simply places the action
in a huge cardboard box. When a side panel was raised, allowing a glowering
lamp-post to slide through to cast its sneering illumination over the
afore-mentioned park bench, the shadow of Beckett seemed to loom large.
Such visual frugality certainly evokes the emotional paucity and bereft
bleakness of the community in which K·t’a lives. But, surely the opera also
intimates the possibility of love, truth, spiritual sincerity?
Where, in Jones’s production, is the beauty of which K·t’a dreams, for
which she yearns, and which is reflected by her own inner ‘goodness’?

And, where is the River Volga, ever-present in Jan·?ek’s score – the soul
of which calls K·t’a to her watery end: drowning or transfiguration, as you
will? Jones tries to convince us that the river lies far out, beyond the
audience. Some of the crowd cast their fishing lines into our midst (one
unfortunately snapped his rod on this occasion), and the catch that they
hook is shoved tauntingly into K·t’a’s face: jump in and join these
slippery soul-sisters. But the fat, flapping fish is a mockery of the
religio-erotic utterance which emanates from the waters in the form of the
off-stage chorus which sings from and of the river’s soul in the closing
episodes of the opera.

Having stirred up so many questions, how fortunate Jones is to have
American soprano Amanda Majeski to push them from our mind. In her house
and role debut, Majeski gives such heartfelt commitment to the role of
K·t’a that one worries how she can come back down from the emotional peaks
and precipices that she scales in her performance. The Act 1 narration in
which K·t’a explains her dreams, visions and nightmares to Varvara was
divinely radiant, a revelation of a spirit threatened by ruptures and
repressions within and the ruthless rigidity of the world without. Here was
an anticipation of the terribly anguished confessions of Luka, Skuratov and
äiökov in From the House of the Dead. Majeski lurched with
paradoxical fluency through K·t’a’s emotional upheavals, from insular
self-denial to nascent optimism, from sweet fulfilment to utter despair.
Her Act 3 confession was simultaneously disturbingly irrational and
hypnotically enthralling.

In 1924, Jan·?ek told his ‘muse’, Kamila Stˆsslov·, that, ‘K·t’a, you know,
that was you beside me. … That’s why there’s such emotional heat in [these
works]. So much heat that if it caught both of us, there’d be just ashes
left of us.’ And, here, there was only ash at the close; the wick of
K·t’a’s life-spirit was utterly expended, the ‘heat’ extinguished. I was
put in mind of Pushkin’s/Tchaikovsky’s Lisa Ivanovna from The Queen of Spades –

a recent visitor to the Covent Garden stage

– of whom Jan·?ek said, in a 1896 review of Tchaikovsky’s opera, ‘it is in
the water that Lisa looks for an end to her troubles.’ 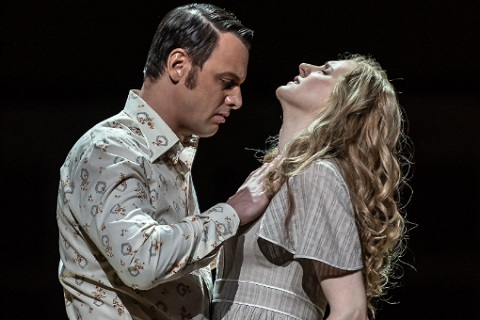 Majeski’s stunning vocal acting dominated this performance. But, there were
other performances to admire too. Pavel ?ernoch’s Boris was warm and
refined of tone, and tender of heart, though it was sometimes hard to
believe that it was the unrestrainable passion of this weak-willed young
man – cruelly bullied by Clive Bayley’s boiler-suited, brash Dikoj – that
had ignited the volcanic, illicit flame that engulfs so many lives. The
lack of emotional connection between Majeski and Andrew Staples’ Tichon was
more acceptable: but, Tichon, described in Mark Monahan’s programme article
as ‘domineering’, was here anything but; rather, this supposed abusive
alcoholic was pitiable, dominated by his mother, desperately in love with
but emotionally disconnected from K·t’a – as much a ‘victim’ as his wife’.

Susan Bickley’s Kabanicha was shockingly cruel and sneering. In Act 1 her
stare was as steely as her put-downs were powerful and glossy, and her
ram-rod back, stuffed into a tight business suit, seemed both to embody and
resist the prevailing social oppression. The Act 2 shenanigans between
Kabanicha and Dikoj seemed to me to veer too dangerously close to
caricature, however. Now the curtains were pulled to hide their hypocrisy
from prying eyes, and Bickley sank to provincial curtain-twitchery when she
was seen spying on K·t’a’s return after her nocturnal tryst with Boris at
the close of Act 2. These scenes should underline the hypocrisy of the
town’s moral standards, but I’m sure I heard a snigger in the Covent Garden
stalls. 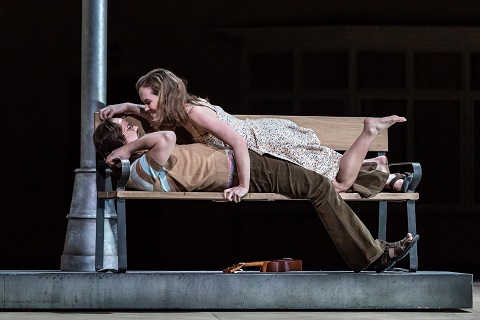 With so much inhumanity on display, the very real human instincts and
indulgences of Emily Edmonds’ Varvara and Andrew Tortise’s Kudrj·ö were a
welcome relief. Edmonds was full of zest and freedom of spirit – leaping
impetuously (and literally) into Kudrj·ö arms in the ‘garden’ scene. And,
Tortise – despite Kudrj·ö brown-striped ti-shirt of eye-watering ugliness,
greasy curls and clunky spectacles – brought a stirring credibility to
their amorous exchanges.

Making his first appearance in the Covent Garden pit, Edward Gardner drew a
performance of tremendous warmth and beauty, and compelling sweep, from the
ROH Orchestra. The score of K·t’a Kabanov· is almost Debussy-ian
in its evocativeness and is undoubtedly one of the composer’s most lyrical
operatic utterances: was I unfair to lament the absence of the ‘violence’
that also lies within, or to miss the horror and the terror evoked by the
dramatic lurches from one emotion to the next?

The tragedy of K·t’a Kabanov· is that propriety wins over
passionate truth. The composer, yearning for Stˆsslov· to reciprocate his
desire, may have identified with the illicit passion of K·t’a and Boris,
but in the final reckoning the human failings on show are universal. The
strength of this production is its heroine’s vision, superbly communicated
by Majeski. And, it is a vision which Edmonds’ Varvara seeks to keep alive
when, complaining of the spitefulness of Kabanicha, who locks her in her
room as punishment for arranging the lovers’ tryst, Varvara pleads to
Kudrj·ö: ‘Will you teach me now how I must live?’ It’s a question we all
might ask.