Sitting through English National Opera’s production of Akhnaten,
you clearly get the sense that there are many bars of great music here,
written by a great composer, but what this opera shares with Satyagraha, which was staged at ENO last year, is an overwhelming
sense that Glass simply doesn’t know when to finish what he has started. To
suggest the ends of his operas are interminable is something of an
understatement. They go on. And on.

I’m not sure it helps that in recent years there has been a tendency to
take Glass’s music more slowly – each of the three acts here was longer
than advertised in the press notes, and the performance itself was
significantly broader than the only recording of this opera. This had
benefits – and drawbacks. Visually, Phelim McDermott’s direction is
stunning – it’s beautiful to look at, the colours are distinctively
Egyptian (the blues, purples, oranges and golds), the heat from the sun is
often so bright you can feel its warmth against your face, and there are
clever juxtapositions between symbiology and elements of the scenery – but
it is also full of distractions. If I found the performance often to be
lacking in power, and slightly flat in expression – contrary to the widely
held belief that Minimalism doesn’t have the musical range to be
expressionist – it was undeniably beautifully sung and, in the case of Act
II, almost overwhelming so.

Akhnaten
is, I suppose, what you might call a palindromic opera. This isn’t just in
the narrative – starting with the funeral of Amenhotep III and ending with
the death and funeral of Akhnaten himself; it’s also reflected in the
recapitulation of the music, too, at either ends of the opera (though in
typical Glass fashion he goes on. And on.). Almost identically palindromic
are the orchestral and vocal timbres of the opera itself and the great
repetitions you hear in both. There are no violins, so the balance given to
the orchestra is predominantly dark; on the other hand, Akhnaten is sung by
a counter-tenor and Nefertiti by an alto so they, too, occupy an almost
identical range albeit at polar opposites of the sound spectrum. A great
production of Akhnaten doesn’t ignore these spatial contrasts –
and ENO’s comprehensively embraces them. The almost hieroglyphic symbiology
which appears on the backdrop during the opening orchestral prelude to the
opera is itself a kind of symmetry to McDermott’s direction: a square frame
comes to represent ‘The Window of Appearances’, an image of steps reflects
the iron staircase a fully naked Akhnaten descends before his coronation
ceremony and which he later climbs to get closer to the sun, and a symbol
of a house defines the reign of the young pharaoh himself.

One of the blessings of this production is that it remains so relatively
close to the libretto and its historical reference points. Glass does fit a
lot into a short time span – an entire almost two-decade reign. One could
argue the essence of agelessness, and immortality, is ever-present, only
for it to be cruelly cut down by death itself. Glass’s “portrait” operas
are, after all, about historical figures who live long after their events,
who shape humanity in their own time and forever afterwards. But Akhnaten’s
reign was about cult, it was about redefining the very concept of religion
itself and the ruin and unrest of a society that never accepted it. In that
sense, Akhnaten has a particular relevance that is still being
fought about today – but if you look slightly deeper beyond the surface of
McDermott’s production he also touches on social division, race and gender
identity, for example.

Akhnaten’s recognition of the sun – or Aten, predominantly the sun disc and
its rays of light – is the dominant visual image of the production. It is
exactly that – a vast disc – blinding in Act I, but by Act II is set in the
background as something to be reached towards against a myriad of sunsets
and sunrises. The cleverness of Bruno Poet’s lighting is that the colours
merge and distort and change and are so subtle that the eye never really
notices them until after they’ve happened. The overwhelming memory of Act
II – and it’s a powerful one – is of Akhnaten slowly climbing the stairs to
get closer to the sun, almost to become consumed by and absorbed into it.
Strip lights are used to show rays of sunlight fanning out of Akhnaten like
a brilliant plume of peacock feathers. And yet, the mythology of human
destruction – that getting too close to the sun is fatal – never quite
strays far from the mind. 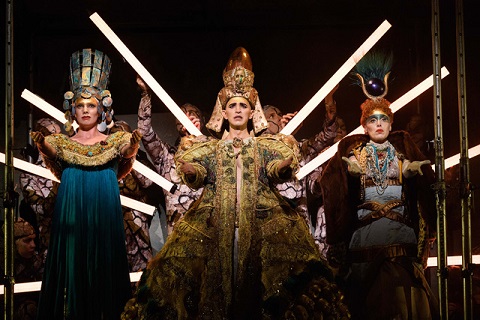 I had mentioned at the beginning of this review that there are some
distractions. This is mainly to do with the juggling – done with quite
mesmerising effect by the Gandini Juggling Company. The booklet notes do
suggest that this art-form was commonplace in Ancient Egypt so it isn’t as
if it’s just there for no purpose – and, in fact, their purpose is quite a
symbolic one in McDermott’s production. It’s clearly completely absorbing
to watch, and I think if your peripheral vision is good enough you can
clearly focus on what is happening elsewhere on stage too. The distraction
is really at a human level in that you constantly (or, I certainly did)
felt disaster was just around the corner: a clash of balls here, batons
that slip between fingers. Technically, it was extraordinarily balletic and
often coalesced around Glass’s music. Symbolically the balls do represent
the disc of the sun, but most cleverly of all is their use during the death
of Akhnaten himself. As the jugglers throw the balls high up into the air
and let them drop to the floor the effect is of an executioner’s axe.

The casting of this production is superb – I’m not really sure it has a
single weak link. Anthony Roth Costanzo, singing the role of Akhnaten for
the third time (his second for ENO, and once in Los Angeles) has evolved
into a dominant stage presence. It is rarely enough for an opera singer
just to be able to sing the part but what makes Costanzo such a delight to
watch is his undeniable stage presence. His devolution into something close
to method acting – the defined body tone, the balletic – near glacial –
movements, the almost Vedic discipline, and the spiritual closeness to
Glass’s music – are extraordinarily convincing. Align this with singing
that has such sweeping beauty and a range of emotion that is unusual for a
counter-tenor and his assumption of the role of Akhnaten is a deeply moving
portrait rather than a performance. Act I rather passed me by, to be
honest, it all felt rather anodyne from a musical point of view – but
Costanzo has rather less to do in that rather than simply move (naked, or
otherwise). Act II, however, was a tour de force – simply one of
the most emotionally, and vocally, powerful displays of singing I’ve heard
for quite some time. The voice can sometimes feel a little strained at the
bottom of the register – but Glass rarely goes there – although those
repeated, long “Ha’s” were glorious with a breath control that was
peerless. The love duet – itself starting and ending in such slow motion
like a mating ritual, with the lovers intertwining in an ocean of blood-red
drapery – had extraordinary intensity to it – both as a visual and vocal
spectacle. But perhaps nothing quite came close to Costanzo’s ‘Hymn to the
Sun’. His ascent towards and into the vast disc of the sun seemed eternal
but was also somehow completely motionless. It had been sung magnificently. 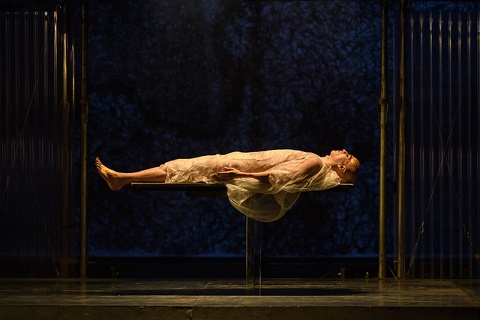 One can’t fault Katie Stevenson’s Nefertiti either. The voice is
exceptionally beautiful to hear, razor sharp yet full of expressive
touches. The chemistry between her and Costanzo – especially in the love
duet – was entirely of the kind where you found yourself being drawn into
their love story and not away from it. Equally fascinating, was Costanzo’s
on-stage relationship with his mother, Queen Tye, sang by Rebbeca Bottone.
If with her white-powdered face, tightly curled hair and almost stony gaze,
she slightly reminded me of the Virgin Queen she has a magnificently
authoritative presence and powerful, resonating voice to match. Zachary
James’ Scribe dominates the stage like Fafner – the voice powerful, his
diction absolutely crystal clear. In many respects, so much of the casting
was exemplary because ENO had brought in identical singers from the 2016
run of this production – there was a very distinct sense of everything just
falling into place as you very rarely get in revivals.

My only real criticism of this performance is with Karen Kamensek’s
conducting of it. No one should underestimate the difficulty in playing
Glass’s music, but one of the issues with this production is whether the
pacing of it is because McDermott wants the music played this slowly
because the movement of the actors on stage relies on it being played this
way, or whether Kamensek is of the view (now also largely believed by
Dennis Russell Davies in his later reworkings of Glass’s scores) that the
music should simply be played this way and McDermott fleshes out his
production around this. This largely worked with her conducting ofSatyagraha last year; it wasn’t always so successful with Akhnaten on opening night here. You might, for example, certainly
expect a more flexible, but broader, tempo to bring more power to the music
in Akhnaten – but oddly that didn’t always happen. The magnificent
timpani and brass passages that Glass writes for the Funeral of Amenhotep
III in Act I, for example, were oddly underwhelming. On the other hand,
that very expansiveness was absolutely compelling in Act II and Act III
when the music is much less dramatically visceral and more intensely drawn.
There’s no denying the ENO orchestra play this music with impressive
precision – though I think on this occasion they took a little more time to
find their stride.

I’m not sure I’ve ever had much truck with people – or critics, for that
matter – who find Glass’s music incomprehensible, or the musical equivalent
of watching paint dry. Akhnaten is an unquestionable masterpiece –
and in many respects Phelim McDermott’s production of it is one that brings
this work to life. It would also, I think, be very hard to imagine a better
cast Akhnaten than the one we have here.