With 19th century Italian opera tunes flowing into Afro-Cuban percussion and chromatic free falls, there is never a dull moment in this fictionalized account of tenor Enrico Caruso’s 1920 visit to Cuba. It has meaty roles for the lead singers too. Regrettably, its world premiere at Amsterdam’s annual Opera Forward Festival was hobbled with a confusing staging that made it hard to keep track of plot, location and minor characters.

Hamel also wrote the Italian libretto, inspired by a novel by the Cuban-Puerto Rican writer Mayra Montero, available in English as The Messenger. When a bomb goes off at a theatre in Havana where Caruso is singing in Verdi’s Aida, an explosion that really happened, he runs outside, into the arms of a local woman, Aida. They fall in love, an event foreseen by her godfather Calazán, who is a priest of the Santería or, more correctly, Lucumí religion. Aida helps Caruso escape the mafia, who is trying to extort money from him, and becomes pregnant with his child. During this romantic, disorienting interlude, Caruso the famous tenor becomes Caruso the man. A ritual dunking in a lagoon fails to restore his peace of mind. Crumbling under stress, he leaves Aida, as he must, to return to his wife and to being a stage and gramophone star. Hamel has fun with 19th-century Italian operatic idiom, quoting from Aida and using Caruso’s own recorded voice, and composing a rousing cabaletta for the lovers. He evokes the tenor’s nostalgia for his youth with a mandolin, adapting the Neapolitan evergreen Torna a Surriento. A synthesizer adds atmospheric sounds, including stylized birdsong. As the story draws to a close, the score becomes progressively less tonal. The opera ends in the antithesis of music, a series of high-pitched tones imitating tinnitus, presaging the tenor’s death the following year. 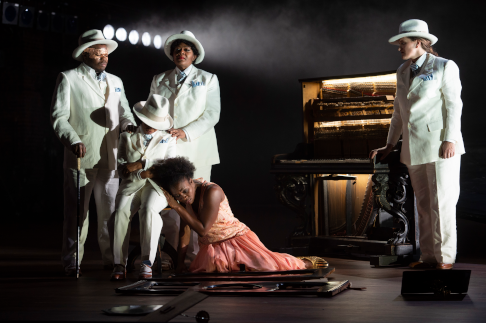 It is a shame that Johannes Erath’s staging did little to elucidate the plot, mostly played out on and around a giant gramophone record, although the cast also spilled into the aisles and side boxes. Whether it was the real Cuba or Caruso’s fevered brain, the set was a dark, dismal place. Video projections added rain and a theatre interior. Alienation techniques such as slow-motion movement and having characters converse with their backs to each other worked against the singers’ emotional engagement. Design visuals were also murky, drowning secondary characters into a sea of interchangeable suits. And it shouldn’t be necessary to consult the program booklet to discover that a giant scallop shell refers to a Lucumí fortune-telling method involving a seashell necklace. When not inflicting spectator fatigue, the staging was often downright silly. The audience tittered when the bomb, its shell printed with Caruso’s name, descended gingerly from the theatre ceiling before exploding. The banal, manic choreography reached its nadir with jazz hands during the lagoon ritual. Perplexingly, orchestral intermezzi were played to a closed curtain, even when the scenery didn’t change. Thank goodness for the performances.

Although not always dead on pitch, a zesty Netherlands Chamber Orchestra, led by Otto Tausk, delivered a vibrantly robust performance. The cast was equally fired up. Airam Hernández may not be the reincarnation of Caruso, but he’s a tenor and a half with a full-blooded Italianate sound. He sang like he believed he could be the greatest tenor of his time, and so we believed it too, relishing his burnished lyricism. Aida is a challenging role, requiring technical and stylistic virtuosity. Soprano Jeanine De Bique inhabited it with tenacious passion, vocal deftness and a beguiling stage presence. Just as striking was mezzo-soprano Tichina Vaughn as her mother, who created a potent scene when warning the lovers not to defy the gods. As Calazán, Simon Shibambu intoned his prophecies with a deep, steady legato. 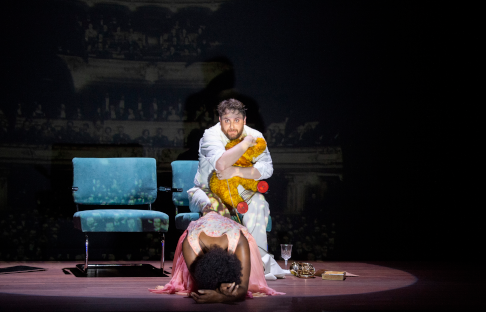 The supporting cast, taking on multiple roles, sparked with energy, but neither blocking nor costumes helped with sorting out which singer was playing which character at which point. Woolly bass Gabriel Rollinson portrayed an assortment of shady and upright characters. Bass-baritone Cody Quattlebaum and baritone Michael Wilmering sang with devilish gusto as, respectively, Caruso’s manager and the opera impresario. Eva Kroon’s mezzo was beautiful and buttery. We know she played a cook because the credits told us so, although she did mention “my kitchen”. Perhaps the stage direction and design should not get all the blame for the blurriness. Could the two-hour one-acter have benefitted from having fewer characters? The libretto does get a bit tangled at the end, with various characters making various mystical pronouncements. On the other hand, its language also becomes more poetic, in keeping with the focus zooming inward into Aida and Caruso’s psyches. Hamel’s music certainly deserves a wider audience. Several excerpts called for a second hearing, even as standalone numbers. Besides the mother’s dramatic solo, there is an originally constructed love duet, with a stormy orchestral refrain interrupting the lovers’ exchanges. The impressive vocal ensemble accompanying the underwater ritual flared into a wild percussive climax. And Aida’s piercing monologue, delivered by De Bique with a glass-like fragility, was the best thing about the finale.