Donizetti had several stabs at historical non-verisimilitude, in a
‘trilogy’ comprising Anna Bolena (1830), Maria Stuarda
(1835) and Robert Devereux (1837), and in an earlier opera, Elisabetta al castello di Kenilworth (1829), based on Walter
Scott’s Kenilworth, in which Donizetti dramatised Elizabeth I’s
infatuation with the young Earl of Leicester.

When one reflects, though, it’s not difficult to see why the Italians might
have been so captivated by Tudor treasons and treacheries, for they offered
a roll call of fated heroines, copious jealousies and intrigues, and
plentiful palaces and posh frocks. Moreover, the hyperbolic emotions on
display, from rage and despair, were perfect fodder for coloratura excess.
And, of course, many protagonists lose their heads – either literally or in
folly and madness. Perhaps, too, the Italians – with their country divided
and largely ruled by overseas powers until re-unification in 1861 –
empathised with those Tudor Brits who had defied Rome and gone their own
way. Focusing on a foreign past was one way to divert the censors who might
object to any hint of contemporary political comment.

Unfortunately, Rossini’s Elizabetta, regina d’Inghilterra (1815)
is not the best example of bel canto foraging into Elizabethan intrigues.
The 23-year-old composer seems to have set out to impress the theatre-goers
in Naples with this opera – the first of nine Rossini wrote for the Teatro
di San Carlo in Naples – by gathering together some of his ‘best tunes’ to
date, for self-borrowings abound. The overture was recycled from the
composer’s Aureliano in Palmira (1813) and was put to further use
in Il barbiere di Siviglia, and the Queen’s first aria sees her
running through the roulades of Rosina’s ‘Una voce poco fa’. The opera was
innovative in some regards; for example, Rossini abandoned unaccompanied
recitatives, though the accompanied ones that replace them are hardly
inspired. Moreover, the casting was determined by Rossini’s need to give
star roles to the San Carlo’s legendary ‘three tenors’, who were similarly
served in Otello, Armida, La donna del lago and Ricciardo e Zoraide. 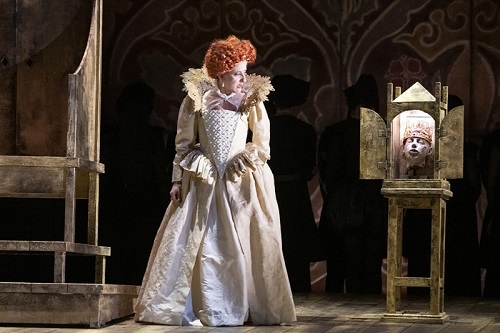 So, it was a brave decision by ETO’s General Director James Conway to
select Rossini’s opera to open the company’s spring tour of works focusing
on the ups and downs of kings and queens. Perhaps Conway should have been
braver still? Elizabetta, regian d’Inghilterra seems to demand a
period setting, and that’s what we got; but, taking a few more risks –
perhaps even updating the action, as AmÈlie Niermeyer did at the Theater an
der Wein in 2017 – might have rustled up a few more dramatic tensions than
were evident during this first-night performance.

The libretto was drawn by Giovanni Schmidt from Carlo Federici’s play Il paggio di Leicester (Leicester’s Page) – which in turn derived
from Sophia Lee’s novel The Recess (1785). The ‘back-story’ is
that during her imprisonment by Elizabeth, Mary Queen of Scots secretly
married the Duke of Norfolk and had two children by him, Mathilde and
Enrico. When fighting the Scots, the Earl of Leicester fell in love with
Matilde, whom he at first assumed to be a simple peasant girl, and married
her.

The opera begins with the Duke of Norfolk brooding jealously about the
rising fortunes of his rival and Leicester’s glory-strewn return to court
after his military victory. Leicester, shocked to find his wife – disguised
in male dress – and her brother amongst the Scottish hostages, confides in
Norfolk who promptly tells Elizabeth, herself enamoured of Leicester, of
the secret marriage. Elizabeth makes a public proposal of marriage to
Leicester whose inevitable refusal sees all three of the ‘traitors’ marched
off to prison. The Queen tries to coerce Matilde into forswearing all
claims on Leicester but is thwarted by the Earl’s integrity. Meanwhile,
Norfolk tries to stir up rebellion among the populace who are angry at the
imprisonment of their favourite, but his efforts to involve Leicester in
his treachery are spurned. When Norfolk’s perfidy is exposed, he attacks
the Queen but the monarch is saved by the swift intervention of Matilde
and Enrico. Norfolk is condemned, everyone else is pardoned, and courtly
life gets back to ‘normal’. 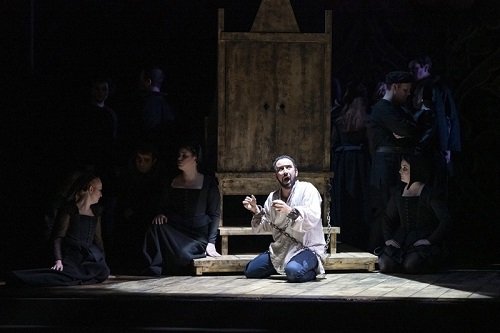 Frankie Bradshaw’s sets are necessarily minimal, given the expediencies of
touring, but even so the throne room and royal apartments are bare and
barren, with just an outsize wooden chair, elevated baldaquin and
Tudor-rose embellished backdrop serving to gesture at the court’s renowned
lavishness. Presumably the severed head of Mary Queen of Scots staring
blindly from a tabernacle next to throne is intended to infer that
murdering one’s rivals doesn’t solve one’s problems. When we move to the
prison (in the ‘Tower of London’) in Act 2, the throne is simply moved to
the other side of the stage, and Leicester shackled to it. A simple colour
scheme suffices: black for the populace, white for the Virgin Queen. The
opera does have several moments of considerable dramatic potential, but not
all such opportunities were taken by Bradshaw and Conway. 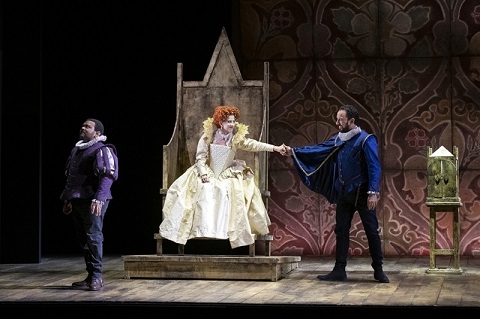 Mary Plazas sang confidently in the title role, and despatched the melodic
embellishments cleanly, but she did not convincingly convey regality and
authoritative hauteur – it didn’t help that she looked somewhat lost when
seated in her huge throne – and her tone lent towards shrillness as the
pitch rose. Luciano Bothelo was a suave Leicester and displayed a fine
spinto voice. Unfortunately, John-Colyn Gyeantey couldn’t match Bothelo for
focus and firmness: initially at least, his Norfolk was not as sharp of
voice as he was of malevolence, although the tenor did acquire more
precision in Act 2. Gyeantey is an ETO regular and at his best in moments
of reflection and poise – as illustrated by his fine rendering of Tigrane’s
‘So ch’Ë vana la speranza’ during ETO’s Radamisto at

– but he struggled with the floridity of the Duke’s blustering rages. Lucy
Hall was an excellent Matilde, singing with warmth and sincerity – in
fact, she was alone in persuading me that she was a ‘real’ person, somewhat
paradoxically given that Mathilde is an entirely fictitious addition to the
historical plot. In the minor roles of Enrico and Guglielmo (the Queen’s
Secretary), Emma Stannard and Josephy Doody acquitted themselves well. 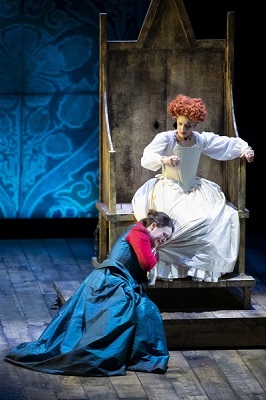 After a somewhat lacklustre overture, in which the horns sounded
particularly nervous, the ETO Orchestra played well for conductor John
Andrews who was alert to the details of period style. One should give
Rossini credit for some vigorous ensemble writing, and the ETO Chorus,
after some, understandable, hesitancy at the start were in fine voice.
Their blocking was, however, not so admirable, and the stilted mass
movement of the Chorus from one static position to another only added to
the dramatic woodenness.

So, praise should go to Conway and ETO for their courage and commitment to
Rossini’s opera: I’m pleased to have had the opportunity to see and hear
it, even if I won’t be rushing back for a second helping. Macbeth
and Idomeneo make up ETO’s spring menu of monarchs and
machinations, and both should offer more meaty musical fare.