This Berenice, which channels Georgian grotesque humour, spiked
with a light peppering of present-day allusions, is thus a welcome breath
of fresh air, borne aloft on the wings of uniformly superb dramatic singing
in this ROH/London Handel Festival co-production.

Handel’s opera did not, however, have auspicious beginnings when it was
first presented in a theatre on the very site of the current day Linbury
Theatre. Appearing during the composer’s ill-fated 1736-37 season, when
competitive rivalry with the ‘Senesino Opera’ was taking its toll on
Handel’s health and hopes, Berenice was the composer’s shortest
running production, closing after four performances with Handel reportedly
‘very much indispos’d’ with ‘a Paraletick Disorder, he having at present no
Use of his Right Hand’. Apart from a brief outing in Brunswick in 1743,
there have since been just a couple of enterprising student productions (at
Keele University in 1985, and at Cambridge in 1993) and two recordings:
Alan Curtis’s 2010 offering with Il Complesso Barocco, which
followed the Brewer Chamber Orchestra’s 2003 recording conducted by Rudolph
Palmer.

Setting the opera in Handel’s eighteenth century enables Thomas to present
both elegance and effrontery. The powdered periwigs suggest polite
graciousness, but the urbanity is tempered by a coarseness – epitomised by
rudely rouged cheeks and the way the boisterous, buckled shiny shoes ride
rough-shod over the central, dominating velvet banquette – which reminds us
that malodorous chamber pots rather than chivalrous manners were the order
of the day. 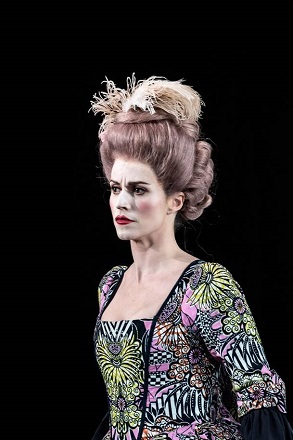 Thomas’s decision to transport the opera from Egypt 80BC to the backstage
of a Georgian theatre peopled by drama queens and fawning fops is a winning
one, suggestive of a political allegory of goings on at Handel’s Royal
Academy of Music, whose Covent Garden productions contended with those of
the rival Opera of the Nobility at the King’s Theatre. Moreover, Thomas
draws upon the tradition of Georgian tragedy which, often lightened by
comic contexts, frequently juxtaposed traditional and modern values within
strong female figures caught between husband and father, personal desire
and public duty: ‘the celebrity actresses playing these women exemplify new
individual freedoms as well as their intricate negotiations of a society’s
contradictory expectations.’

All well and good for the #MeToo age.

First, the single gripe. Selma Dimitrijevic has provided a new English
translation and judging from the few phrases readily audible – “politics is
cursed” – it’s a deft text. But, in the resonant Linbury acoustic,
consonants went AWOL and, in the absence of surtitles, great swathes of
recitative and aria text disappeared into the hinterland. Given the
unfamiliarity and complexity of the plot, this was not helpful. 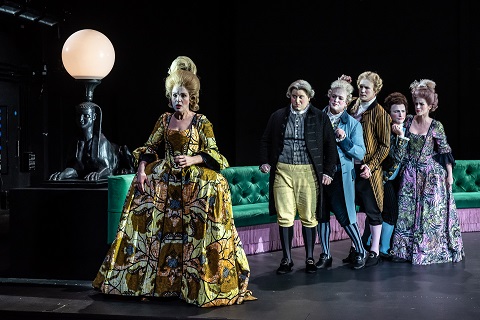 Hannah Clark’s very open set design, for all its focal impact, perhaps does
not help. An emerald green, velvet, semi-circular sofa, adorned with a pink
fringe, is the sole piece of ‘set’, seeming to extend the seating of the
house itself as it stretches across the stage, set within an embracing
black expanse. It houses, during the overture, a motley crew of thespians
and toffs sipping Earl Grey and engaging in piquant exchanges, its peak
crested with a bloomy display worthy of a psychedelic Dutch flower
painting. There are a few reminders of the drama’s Egyptian roots – in the
brightly hued designs adorning the regal sisters’ pannier hoops, and the
two Barbary Lion gates guarding stage left and right.

The plot is a prototype cat’s cradle of romantic knots. Alessandro loves
the Egyptian Queen Berenice, who is betrothed to Demetrio Prince of
Macedonia – who loves the Queen’s sister Selene – but Berenice, a marital
pawn at the hands of the Roman Emperor, is forced into betrothal to Arsace.
Baroque amatory quadrangles are here expanded to become a pentagon of
possible romantic connections between the Egyptian queen, her sister, and
three potential husbands, at the heart of which two feisty and resentful
sisters rage, riot and rule. 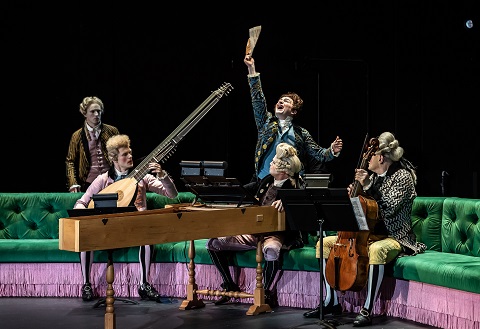 With the continuo trio of Mark Caudle (cello), Oliver John Ruthve
(harpsichord) and Jonas Nordberg (archlute) bewigged and seated amid the
action – they have their music snatched from under their noses on occasion
– conductor Laurence Cummings was nestled in the Linbury pit with just
strings, oboes and bassoon. This was one of Handel’s low-budget
orchestrations but, in Cummings’ hands, no less vibrant and buoyant given
the scant resources. Tempi seemed just right, and the lean string textures
did promote the voices to the fore; that said, Cummings might have drawn
greater variety of articulation and tone from the London Handel Orchestra
string players.

What really made this such a terrific evening of musical drama, though, was
the commitment, engagement and prowess of the superb cast. As the titular
monarch, Claire Booth evinced regal righteousness and authority, and a
quirky unpredictability, singing with real bite: a little brittle perhaps
in her opening rejection of patriarchal command addressed to the Roman
ambassador, ‘No, che servire altrui’, though topped with some fantastically
acerbic cadential trills, but softened subsequently to convey the Queen’s
conflicting emotions. Berenice’s Act 3 ‘Chi t’intende?’ was a tour de force of musico-psychological probing aided by James
Eastaway’s delicious oboe obbligato. 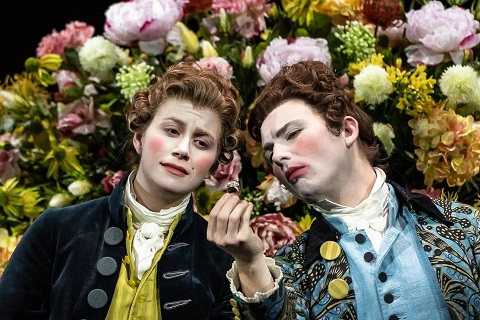 Rachel Lloyd flounced furiously as the feisty Selene, dark of tone and
temperament, the fioritura fiery but pristine. As Demetrio, loved by both
sisters, James Laing sang with unforced strength, flexibility and
expressiveness. It was really satisfying, too, to see young members of the
cast finding their musico-dramatic feet: Patrick Terry’s Alsace was goofily
gormless – we felt for him at the close when he was a loose end as the
lovers’ tied the marital knots – though still calmly negotiating the
roulades of Alsace’s rage aria, while Alessandro Fisher displayed
confidence, professionalism and assurance as Fabio. William Berger was able
to summon vocal intensity as Aristobolo.

Best of all, though, was Jette Parker Young Artist Jacquelyn Stucker as
Alessandro. The role is less virtuosic than the others, but the pure
directness of Stucker’s lyrical spinto surely conveyed the integrity of a
man who puts love above self-advancement, and the elegance of the soprano’s
stylish phrasing was wonderfully engaging and honest.

The singers balanced a sure sense of Handelian style – and impeccable
tuning and passagework – with an individuality of expression which added
warmth to what might have been a rather chilly satire. In the concluding
ensemble, with the marriages of Alessandro to Berenice and Demetrio to
Selene resolving the political and amatory tensions, the soon-to-be-weds
sing of the joyous harmony that allows them to set aside the struggles of
love and politics. Heart-warming sentiments: if only things were that
‘simple’ in real life.

See The Oxford Handbook of the Georgian Theatre 1737-1832
edited by Julia Swindells and David Francis Taylor.