The Royal Opera House’s new production of La forza del destino,
directed by Christof Loy and first seen at Dutch National Opera in 2017,
had been hyped to the heights since the first moment it was announced that
it would reunite Anna Netrebko and Jonas Kaufmann for the first time at
Covent Garden since the soprano and tenor formed a triumphant threesome
with the late Dmitri Hvorostovsky in La traviata in 2008. The
anticipatory buzz was amplified by gossip about tickets changing hand for
crazy figures on re-sale sites, speculation about which star would cancel
first, and rumours that Kaufmann had been a rare figure at rehearsals, with
Azerbaijani tenor Yusif Eyvazov – Netrebko’s husband, who shares the role
of Don Alvaro – filling in at the dress rehearsal.

For once, though, a hyperbolic build-up did not culminate with bathos but
with brilliance: consummately expressive singing which quite simply
entranced and exhilarated. There is never any doubting the luxurious beauty
and intense communicativeness of Anna Netrebko’s soprano but on occasion,
as in last year’s


, I have longed for a little more precision to accompany the vocal glamour
and shimmer. Here, however, making her role debut as Leonora, Netrebko had
me transfixed with a performance in which drama was balanced by discipline,
and interpretation was fired by intellect and intuitive insight in equal
measure, casting a compelling vocal spell. 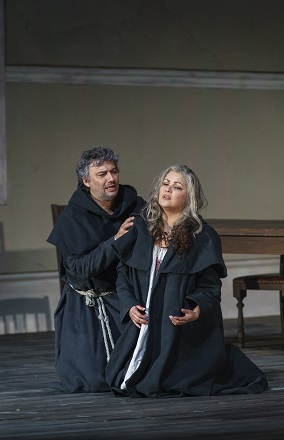 From the first gestures of the dumb-show presented during the overture, Loy
places Leonora at the centre of the drama and Netrebko’s vocal and physical
definition of character was riveting. Though this Leonora was painfully wracked by conflicting
desires and duties in ‘Me pellegrina ed orfana’, her Act 1 duet with
Alvaro had an almost fierce directness. ‘Madre, pietosa Vergine’ began with
a deep darkness, blossomed sweetly, then floated bewitchingly – an
exquisitely elegant mezza voce – in ‘Vergine degli angeli’. Nebtrenko rose
effortlessly above the orchestra’s throbbing climaxes, while the agonising
intensity of ‘Pace, pace, mio Dio’ conveyed both Leonora’s fervour and her
frailty with spellbinding magnetism. 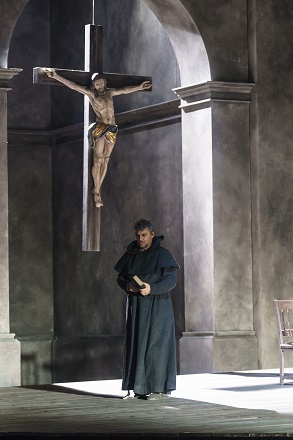 Sweeping in through a window stage-right, as if to counter any doubts about
his participation with a bold physical statement of his presence, Kaufmann
was a heroic Alvaro, a little restrained at the start but expanding to
encompass a magnificent range, vocally and dramatically. The tenor spins a
heart-meltingly lovely line, by turns ardent and tender, the lyricism
charged with tragic suffering, and, as demonstrated in Act 3’s ‘La vita e
inferno’, has absolute control of his voice from the most impassioned
fortissimo to the softest whisper, magically grading the diminuendo at the
close. Ludovic TÈzier’s Carlo was no less impressive, his glowing baritone
equally commanding and absorbing as he unleashed a vengeful fury which was
countered by smooth lyricism in ‘Urna fatale’; the extended duets of Act 3
– in which Kaufmann and TÈzier reprised a partnership first formed in
Munich in 2014 – were finely wrought dramatically and musically, and
utterly compelling. 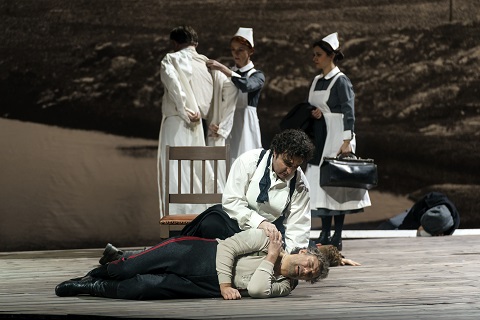 And, the casting luxuries did not stop there, with several singers
reprising roles that they sang in Holland including American soprano
Roberta Alexander who was a splendid Curra, strongly defined and impactful,
and Italian tenor Carlo Bosi as the pedlar Trabuco who arrived to sell his
wares with a chutzpah worthy of a Dulcamare. Ferruccio Furlanetto’s Padre
Guardiano was a growling dark foil to Leonora’s sweetness, while Alessandro
Corbelli was excellent as Melitone, fun but never flippant, the text
clearly enunciated and gracefully phrased. It’s a shame that the Marquis of
Calatrava’s death, which triggers the fateful tragedy, prevented us hearing
more of Robert Lloyd’s bass which conveyed a father’s love and his demand
for submission with equal conviction. And, it was good to hear Jette Parker
Young Artists, Michael Mofidian, as Alcalde. Veronica Simeoni, making her
ROH debut, seemed not entirely comfortable in the role of Preziosilla:
though she did her best to make ‘Al suon del tamburo’ a rousing romp and
danced gamely in the Rataplan chorus, sporting emerald belly-dancer
pantaloons and surrounded by somersaulting acrobats in spangly top hats,
she struggled to project and to reach the upper echelons of the role
securely and confidently. 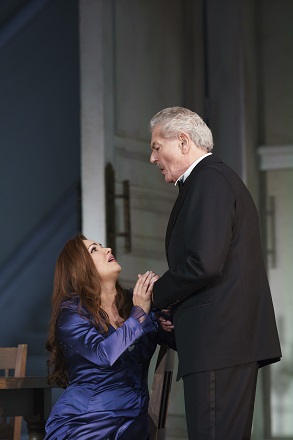 From the pit, Sir Antonio Pappano immediately ratcheted up the tragic
intensity in a surging, heated overture, and crafted the ebbs and flows of
the tragedy with consummate command. Whether carousing, warring or in
devotional mood, the ROH Chorus were in fine voice and entered into the
spirit of the lively, sometimes rather inconsequential, tableaux and crowd
scenes.

Verdi abandoned the classical unity of time, place and action in La forza, thereby creating a headache for directors who must make
varied locations spanning vast geographical distances, and visited over a
period of many years, cohere. Then, there’s the problem of how to
assimilate the broad humour within the prevailing tragic narrative. Rather
than imposing a binding ‘concept’, Christof Loy and designer Christian
Schmidt seem to embrace the disunity. The white marble walls of the
Calatrava home that we visit in Act 1, subsequently fall though remnants of
the mansion remain in the ensuing locales as the stage becomes a palimpsest
of places and periods. Costumes allude to diverse epochs and sometimes seem
designed to add to the ambiguity and inconsistency.

There are just two assertive directorial gestures, the first being an
extended dumbshow during the overture. Here, atop and around the long table
which slices across the floor of the Calatrava palazzo, the three main
characters are seen as children. As the screen rises and falls three times,
destiny plants the dart which will find its target many decades later;
Leonora sits, head bowed, beside a small stature of the Virgin Mary which,
enlarged and aloft, will cast a deep shadow over her life. Then, as the
drama unfolds, Loy offers us recurring projections which zoom in on Leonora
at the moment of her father’s accidental death; the moment which thus seals
her fate. But, these ‘psychological close-ups’ are distracting and
unnecessary: Verdi’s music tells us all we need to know – especially as
here, when it is sung and played with such power and impact.

These directorial diversions don’t really matter, though, as the singing is
so absorbing. Verdi may keep his hero and heroine apart for much of the
opera, as we traverse through taverns, monasteries and war zones, but when
Netrebko and Kaufmann are finally united in Act 4 it certainly feels like –
if not ‘fate’ exactly – then very good fortune indeed.