I am ashamed of my doubt. Every program by Stephen Stubbs’ ensemble Pacific MusicWorks is thoroughly researched, meticulously rehearsed, and refreshing to the ear. This one surpassed any reasonable expectations.

To begin with the soloists: Danielle Sampson and Tess Altiveros are both formidable singers technically, with an astonishing command of 17 th century vocal technique; but how could one anticipate that they would also have the vivid presence of a Ziegfeld sister-act?

Sampson’s instrument is pure, virginal, but capable of conveying innuendo lusty as a wink with an infinitesimal bluesy bend of a note; Altiveros’ sound is darker, creamy, sensuous, but she can fill it with so much drama that the stereotyped tropes of a Baroque lament offers a fully rounded portrait of a woman’s pain. Together, they are sprezzatura personified. 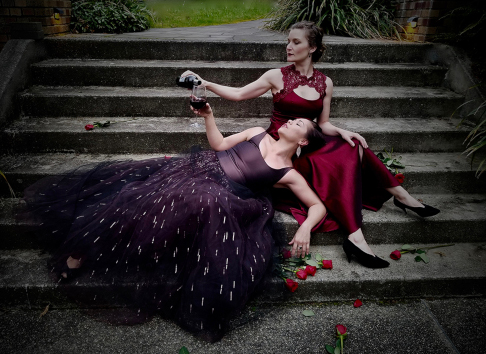 Barbara Strozzi (1619-1641) is by now a known quantity, at least in “early music” circles, but I wasn’t ready for the expressive range of her gifts: eight numbers spanning subjects from a lover’s lamenting how his love has harmed the beloved to a song demanding that Cupid get up and active that reminds me of Cole Porter at his most outrageously risqué.

Less individual but still powerfully crafted were two arias and a sensuous hymn to the Virgin by the operatic pioneer Francesca Caccini. Antonia Bembo’s fulsome encomium of Louis XIV Chiaro esempio is effective if embarrassing, a perfect illustration of the icky side of patronage.

Most surprising were three instrumental “sonatas” (she composed 12 in the course of her 60-year career) of the Ursuline nun Isabella Leonarda of Novara. Such instrumental “breaks” are common in early-music vocal concerts. They are never merely breaks in PMW evenings. The group’s wonderful “house band” brought out the highly individual character of each brief suite, and the audience responded to each with growing enthusiasm, ending in a genuine and deeply deserved ovation.