And as ingenious Executive and Artistic Director Josh Shaw has reimagined the piece (marketed as #Superflute), the staging is also just about as relentlessly and adorably rambunctious, all the while proving to be commendably musically refined.
In tandem with E. Scott Levin (also the evening’s Papageno), the duo have created libretto and lyrics that set this evergreen Mozartian musical fantasy in the milieu of 1990’s video games and have peopled its cast with a fascinating interaction of disparate heroes, royalty, and nemeses plucked from varied sources.
Truth up front: this writer never played any of those games, and aside from a couple of personages that became pretty unavoidable pop icons, I wasn’t much aware of the sources. Will it surprise you to know that it didn’t matter? Not a bit. To their immense credit, Mssrs. Levin and Shaw have honored the original character relationships with amazing fidelity, and they have actually enhanced the clarity of what is after all a Singspiel whose storylines, style, unities, symbolism, subtext, and parallel plots are all over the map. 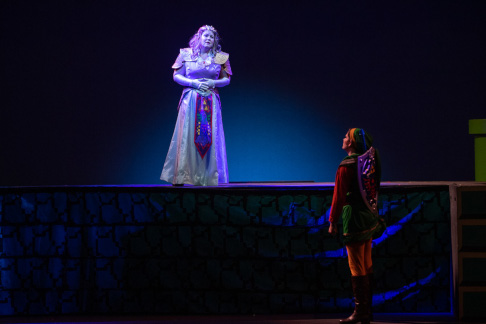 Grounding the entire concept is a perfectly calibrated video projection design on the cyclorama that makes nary a false move the entire evening. Like a giant computer screen, referenced games, characters, challenges, and routines morphed non-stop into a visual feast that clearly led game enthusiasts and know-nothings alike through the plot machinations.
Indeed, a pantomime during the overture set it all up, as couch potato gaming geeks fought over which program they would upload and participate in. As a long-suffering parent “pulls” the plug on the equipment, the projections take on a “magic” life of their own and further clarify the characters by listing the players with their video game alter egos. Holy Wolfgang, that’s pretty clever stuff. Those of us “in the dark” were enlightened, while those “in the know” were spun into a minor frenzy of recognition and camaraderie.
All this would mean little were it not for the high standard of the singing and playing, and here POP really excelled. The afore-mentioned E. Scott Levin was a wholly winning Papageno (Mario Brothers Plumber). His clichÈd Italian accent, charismatic engagement with the audience, and larger than life, obfuscating underdog demeanor endeared him to one and all. If Mr. Levin’s incisive baritone sometimes threatened to verge on a hectoring delivery, and if his intonation veered a bit in the duet with Pamina, his was nonetheless an assured, appealing traversal of a role that can and does walk away with the show.
Pride of place for radiant singing has to go to the assured, ringing Tamino (Link) from Arnold Livingston Geis. His polished performance was quite simply as good as it gets. Mr. Geis has a sizable lyric instrument that lavishes honeyed tone on all registers and at all volumes. His secure technique and stylish phrasing enrich the production immensely, and moreover, Arnold is handsome, winsome, and every other sort of “some.” And wittily funny to boot. It will be a pleasure to watch his star rise as it surely will. 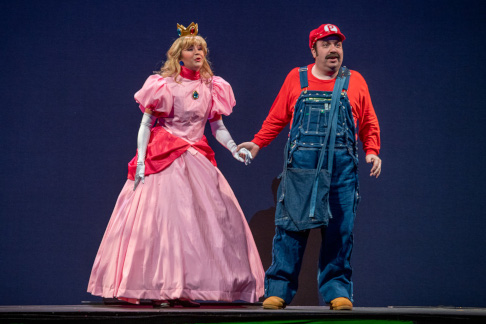 Alexandra Schoeny deployed an uncommonly alluring, bronzed soprano as Pamina (Princess Peach), and she brought admirable dramatic spunk and sentiment to the mix. Her gleaming sound above the staff was complemented by a rich middle register, with her well-schooled tone evenly knit throughout the range.
In the notoriously difficult role of the Queen of the Night, Michelle Drever was quite an assured exponent. She dispatched both of her arias with aplomb, imbuing the slow sections with well calculated pathos, and the rapid-fire coloratura with crackling ferocity. If the lowest parts of the role lacked the same presence as the ringing top, well, no one comes to hear the Queen’s low “f”, do they?
Andrew Potter’s Sarastro was everything one could wish, his darkly sonorous, rolling bass the exact fit for his imposing music. The fact that his physical presence towers above the rest of the cast, and that he manages to somehow find the role’s dignity even in a Donkey Kong ape suit, is a testament to his mature, persuasive interpretive gifts. He also embraces the script’s humor with good-natured gusto.
Robert Norman was a wiry, characterful Monastotos (Mario Brothers Luigi), his secure, nimble tenor emanated from a fleet-footed, loose-limbed physicality that was benignly menacing. Laura Broscow proved a wholly enchanting Papagena, first as a frisky old woman high on a Geritol overdose, then as a perky princess with gold in her heart and silver in her voice. She mined every bit of humor in her duet, all the while singing it with accuracy, verve, and lilting tone.
The Three Ladies were very well-matched. Soprano Tara Whecker led the trio commandingly as First Lady; Ariel Pisturino’s plush mezzo served the Second Lady well; and Third Lady Megan Potter grounded the ensemble with her plummy alto phrases. The Spirits, often cast with boys, were on this occasion very well performed by a second trio of talented ladies. The lighter voice qualities of the assured vocalists Emily Rosenberg, Amanda Bernjamin, and Christine Maris Li entwined to beautiful effect and proved a highly effective aural balance to the weightier tones of the Ladies. 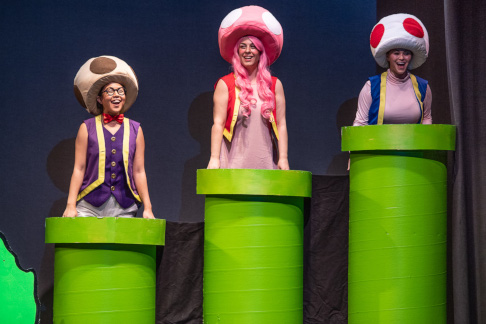 As the two Priests and the Armored Men, Jonathan Mathews and Joshua Alarcon dispatched their brief but important moments with accomplished vocalizing. Mr. Matthews sported a solid tenor that soared in the arching Priest duet, then proved to have the correct stentorian leanings in the chorale. Mr. Alarcon’s pleasing, slightly grainy baritone fell easily on the ear, and he ably complemented his partner, providing a solid foundation for the ensuing trio and quartet.
Edward Benyas indeed worked some “magic” in the pit with his assured baton eliciting stylish results from a sizable orchestra. The accomplished playing was all the more laudable since the band seemed to include a number of very young players. I have heard many an established house orchestra struggle with this varied score. It is to Maestro Benyas’ great credit that the musical execution was of a very high order throughout.
Mr. Shaw’s colorful, cheeky set design constantly strives for variety and visual interest. However, perhaps it is busier than it needs to be. Cumbersome staircases get moved fairly often simply to create a new look, different levels, or a structural element that sometimes seemed superfluous. Even though the moves were accomplished with precision and haste, they still slowed down the action and prompted the addition of orchestral music (from The Impresario) to fill the silence. And the continually changing painted cloths, fronting the wall-to-wall elevated central platform were too frequently peeled away to the riiiiiiiiiiiiiiiiiiiiiip of Velcro.
However, it has to be said there were a surprising number of special effects that tickled the eye: the revelation of cartoonish “rolling waves” under the platform, the three green stovepipe like structures that allowed characters to appear from behind and mount them, and the obstacles that appeared in the trials that had Tamino and Pamina comically hopping over them a la a video game skill challenge. In fact, the presentation of the trials was arguably the most effective I have ever seen, especially as they were presented as prerequisite to get to the next “level” of video play.
Maggie Green’s costumes ably captured the look of each iconic character’s attire and provided a riot of color and imagination. For future outings of this edition, a couple of the women’s dresses might be adjusted in certain details to better flatter the actual singers’ physical attributes rather than just recreating the original cartoon costume. However, that does not diminish Ms. Green’s over the top accomplishment in devising a wackily diverse assemblage of eye-popping dress and wigs.
Bo Tindell illuminated the proceedings with a good eye for color washes, effective area isolation, and well-judged specials. The design also managed to keep the video show backdrop and overall lighting in good balance the entire evening.
The ubiquitous Josh Shaw has directed the enterprise with a knowing sense of pace, well choreographed set changes, overall commendable traffic management, effective use of the playing space, and inspired comic business. I will not soon forget the invasion of a profusion of inflatable bananas in a Sarastro (Donkey Kong) dominated scene, with the entire animated cast brandishing them, batting them around, and cavorting about in inspired lunacy.
I would encourage the director to consider adding a movement specialist to the team. Stage pictures sometimes got repetitious or cramped, dance steps were unnecessarily limited by sameness, and character relationships might have been more meaningfully developed with better spatial interplay. And I do wish that some self-conscious jokey dishing of operatic conventions could be redirected into the character-based humor of the vast bulk of the piece.
If any purists were left standing in the face of this indisputable audience pleaser, they might wish for some cut material, like the Speaker-Tamino exchange to be reinstated. But these are minor quibbles in what was for me, a minor triumph of reimagining and retelling a jumble of a masterpiece, thereby making it more comprehensible and enjoyable to a contemporary audience.
I loved it. I think Mozart would have loved it. If not, to hell with him! POP’s The Magic Flute lives up to its #Superflute marketing handle in most every aspect imaginable.
James Sohre