Eszter Balogh won first prize – supported by The Carne Trust – winning
£5000, and the second prize of £2000, supported by London Handel Festival
audiences, was awarded to countertenor Patrick Terry. The Audience Prize,
supported by Angela Hyde-Courtney, was presented to William Thomas, and the
Selma D and Leon Fishbach Memorial Awards went to William Thomas and David
de Winter. The adjudicators for this year were Catherine Denley, Michael George, Rosemary Joshua
and Ian Partridge, who were chaired by Jane Glover. The four finalists presented
all-Handel programmes accompanied by the London Handel Orchestra, conducted
by Laurence Cummings.

In addition to the cash prizes, the Competition supports the continuing
professional development of the Finalists by offering them guaranteed
performance opportunities. All four of the 2019 Finalists will be invited
to give a lunchtime recital in the 2020 London Handel Festival in addition
to a showcase concert with Laurence Cummings on 19 September this year. As
the winner, Eszter Balogh will be invited to give a recital for the City
Music Society in October, and also to be a soloist in the Messiah
for the Huddersfield Choral Society in December with Jane Glover and the
Orchestra of Opera North. Eszter Balogh and Patrick Terry, as first and
second prize winners, will also be invited to give a lunchtime recital in
the Halle Handel Festival in Germany next year. This year’s London Handel
Festival features over 20 past Finalists. 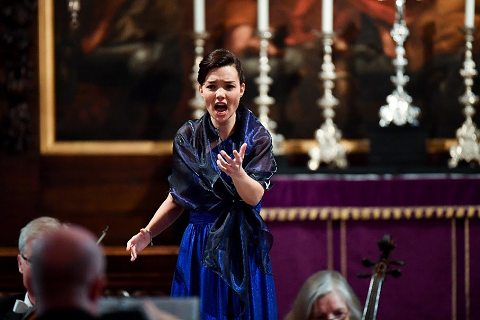 “Congratulations to both Eszter and Patrick for winning the first and
second prizes in the Handel Singing Competition, a wonderful
achievement. I have been impressed with the very high standard this
year, and I look forward to working with all four Finalists in future
years.”

We had a fantastic Final on Saturday. Four remarkable singers with
phenomenal voices and such dramatic range. Bravo to everyone! I am
thrilled that we will get to work with Ezster, Patrick, William and
David again.”

The Handel Singing Competition launched in 2002 and has since become an
integral part of the London Handel Festival. The competition this year
received over 170 applications from 25 countries, including Argentina,
Australia, Israel and the US. Previous finalists include Iestyn Davies,
Lucy Crowe, Grace Davidson, Tim Mead, Christopher Ainslie, Rupert
Charlesworth and Ruby Hughes. The Handel Singing Competition is generously
sponsored by Prof. Schumann GmbH.