Taking as it root inspiration Stockhausen’s Welt-Parlament, the first scene
from his opera Mittwoch aus Licht, Actress (or, Darren Cunningham)
has undoubtedly composed something impressively large-scale – though it is
clearly neither Stockhausen nor conventional opera. I don’t think you feel
short changed because of that, but over its 70 minutes it misses the mark
on several fronts while being of quite a high order on others. The
revelation here was often to be found in the vocal writing – as
obliterated, and pixelated, as it often comes across – rather than the
tremendous blocks of sound which ebb and flow with a semi-volcanic force,
though they can ultimately seem quite restrained. Cunningham might have
looked to the Stockhausen of COSMIC PULSES for that pyroclastic,
cosmological power for a more penetrating effect built on his AI and
electronica – instead, one often felt trapped beneath a thunderstorm or in
a wind tunnel.

Welt-Parlament is not specifically sectional – though the complexity of the
layered writing for the voices and the subdivisional way in which
Stockhausen modulates rhythm, alternates between registers and creates
multiple densities of sound to different choir groups can give it that
impression. Actress x Stockhausen Sin {x} II is obviously a more
sectional work, and needs to be, given it is almost twice the length. It
takes considerable time for Cunningham’s piece to even become a sung work –
one could argue if it is an opera it has one of the longest
preludes of any – but the debt to Stockhausen when you get to hear the
voices is quite apparent. There is a spatial aura, a sense of the unknown
about where those voices first emerge from. They finally come, somewhat
penitently, in white robes, down the steps of the stalls only to leave the
auditorium and then reappear on stage without the robes.

Stockhausen is rather more concerned in Welt-Parlament (as he was in so
much of his music for the voice) with exploring the limits to which it
could be stretched and used as an instrument; the use of vowel sounds in
Welt-Parlament is almost repetitively obsessive. Cunningham has largely
avoided this approach – though not entirely because by using AI he has been
able to tangibly change the structure of syllables and use linguistics in a
specific way. You can barely make out that the words are German – and a
libretto might have been more than helpful here. In the end it probably
doesn’t matter because the quality of writing for the soloists is very
impressive, and it was often indelibly striking enough to resonate. The
sheer range of the vocal register is huge, stretching right from the bottom
of the scale to the upper-most reaches. Cunningham has kept some of the
effects which Stockhausen uses in Welt-Parlament – blocking, long tones,
clicking, rushing sounds, the occasional click and the use of kisses. But
thematically, this is very close to what Stockhausen intended – even if
dramatically it departs significantly from what the composer asks for. I
believe only two or three rehearsals may have taken place – but the sheer
quality of the singing from Nederlands Kamerkoor seemed to have a
lifetime’s experience of this music behind it. 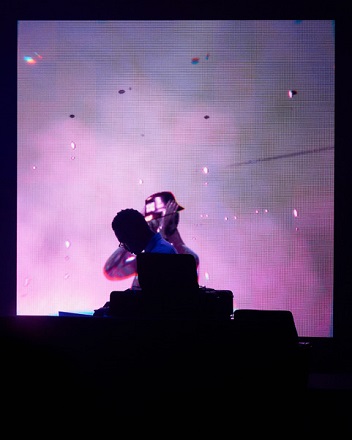 This is, of course, a parliament about love – albeit one where its people
have been abandoned to make way for the brutal pursuit of power. A World
Parliament is convened to debate the nature of love and to sign into law a
universal treaty which will protect it because life cannot exist or be
sustained without love. Like Stockhausen’s original, it is the “meaning” of
the word love which is to be debated – though what Cunningham tries to
achieve is a broader, more modern discussion that tries to focus on
contemporary issues of gender, equality, identity and race. He fuses
British and Dutch politicians – and if what emerges is sometimes a little
stilted it’s probably because of the unorthodox subject for protagonists a
little unfamiliar with debating something other than politics.

The roles of Eve (The Romantic), Michael (The Rationalist) and Lucifer (The
Antagonist) are taken from within the choir – and were magnificently sung.
However, the sectional – even fragmentary way – in which this work
disintegrates, and the way in which the staging is designed, left me with a
somewhat different impression as to who Eve, Michael and Lucifer might
sometimes have been. A stenographer/pianist (Vanessa Benelli Mosell), the
conductor (Robert Ames) and Cunningham himself (with a rather malevolent
Darth Vaderish figure on screen behind him) seemed viable shadows of these
three key roles.

Staging any Stockhausen work is fraught with difficulty – or, even staging
a work which owes a debt to one of his pieces as Actress x Stockhausen Sin {x} II does. I remember the Birmingham
Opera Company staging this particular scene in a factory with the
parliament perched high up on ladders – a very different vision to what
Stockhausen intended which is a glass dome on top of a skyscraper. The
approach here in the Royal Festival Hall was ultimately more pragmatic
(though it may well be staged slightly differently in the magnificent, and
vast, gas building which will house this work’s next performance at the end
of the month at the Holland Festival). If the strips of lighting across the
top of the stage did give a semblance of the cosmos to it all, the actual
parliament seemed as conventional as a session at The Hague. Lighting was
almost minimal – especially during the vast opening and closing electronica
sections which were played in a kind of tenebrous darkness. A video screen
behind Actress proved less distracting than I imagined – though there was
something fascinating about watching the pixels collapse until the colours
deepen into red and finally it just blanks out.

The most notable weakness in this work is the piano part – which I simply
failed to comprehend. Cunningham had mentioned during a discussion before Actress x Stockhausen Sin {x} II’s premiere that the only composer
for piano with whom he really identifies is Ravel – and yet, oddly, almost
nothing of Ravel came through in the writing for this part at all. This
just felt whimsical, added nothing particularly revealing to the work and
felt tonally out of context with the rest of it. Actress x Stockhausen Sin {x} II might have left an almost
universally favourable impression without this entire section.

I don’t think this is a piece which challenges listeners in many of the
ways that Stockhausen’s works do – twenty-five years after Welt-Parlament
was composed the dynamics and complexity of that music are out of reach for
many composers. Actress x Stockhausen Sin {x} II is an interesting
diversion into a multi-format sound world – though perhaps not an opera –
but at its best it is an impressive achievement for this young composer.

Actress x Stockhausen Sin {x} II
, a co-commission with the Southbank and the Holland Festival