The work is a notoriously fragmentary hybrid, as quixotic as its
eponymous ‘protagonist’, in which the unstable relationship between the
‘real’ and the ‘imagined’, between the ‘tangible’ and the ‘idealised’, is
both the ‘perfect’ embodiment of Berlioz’s ‘meaning’ and irreconcilably
opposed to coherent theatrical presentation.

That doesn’t stop people trying. And, any director who tries has fathom how
to deal with the work’s innumerable gaps, inconsistencies, multiplicities
and conflicts – in the music and in the drama, of style and of mode.

In the music there are symphonic narratives; oratorio-like choruses which
comment on events in the past; set-piece marches, dances and songs, some
diegtic; operatic recitative and quasi-aria. Sometimes the music takes us
into a character’s consciousness and invites us to experience their
feelings, as in Faust’s invocations in which the music presents his
response to his immediate world, thus communicating his inner life. At
other times, such musical empathy is denied us, such as at the start of the
work when Faust tells us he can here choruses: ‘All hearts throb to their
victory song.’ We do not hear such songs, and we remain alienated
from his experience. Then, the music sometimes roots the action in reality:
we hear students singing in the streets, military tattoos and fanfares.

The drama lacks tension. Characters sometimes address each other but they
do not ‘converse’. Are their relationships real or allegorical? There are
flesh-and-blood soldiers and students alongside flying demons and
hallucinatory visions. Situations are often unspecified and discontinuous.
For example, waiting in vain for Faust’s arrival, Marguerite sings the
romance ‘D’amour l’ardente ?ame’: she could be anywhere, and the moment
could be placed either before or after what we have just seen and heard.
The action resumes subsequently, with Faust in the countryside. There is no
clear chronology or causal relationship.

Ultimately there is no unity; and this is Berlioz’s intent. The real and
the imagined meet on the stage and in the score. So, if one stages the
work, what should the theatrical stage ‘represent’? An identifiable time
and place? Or, a magical ‘anywhere’? Specificity destroys illusion;
dream-like passages destabilise reality. Clearly a different, new kind of
logic must prevail.

In this new staging at Glyndebourne, Richard Jones gives us his own brand
of ‘logic’ but ‘coherence’ eludes him. Before we hear a note of music,
dancing demons in lurid body suits and horned masks limber up, as if for a
sporting contest; then, a chorus of fiends takes its place in the stalls
perched on three sides above the black box set through the cracks of which
lurid lights glow. These are, apparently, the students who will observe
MÈphistophÈlËs’ masterclass in malevolence – though they might as well be
spectators at a gladiatorial combat. Or an audience at the theatre, an
effect enhanced when MÈphistophÈlËs turns to address us: “my devils”.
Aloft, they resemble the chorus in an oratorio, commenting on the action;
when they descend, they become participants in the drama, effecting
‘now-you-see-me now-you-don’t’ changes of costume which further makes the
audience complicit in the deception of Faust. 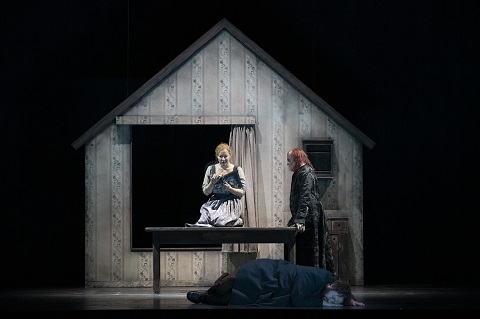 So far so good: the work’s hybridity is reflected in this conceit. And, if
the work is to succeed on the stage it should surely do so on its own
terms. But, immediately Jones starts meddling. The entry of a
MÈphistophÈlËs – a Paganini-like figure, swathed in a black, embroidered
trench coast, with lanky red hair and clutching a battered violin case –
marks the first of Jones’s ‘amendments’: he has added spoken text, written
by Agathe MÈlinand and based upon Goethe but with, in Jones’s words,
“what’s germane to Berlioz”. Presumably such text is designed to ‘fill in’
the gaps in the narrative but it simply unbalances the ‘theatre v.
oratorio’ relationship still further – and it didn’t help that Christopher
Purves’ weary opening lines had a few unintended hiatuses.

In a programme booklet interview, Jones also purports to have been
influenced by cinema, describing the beginning of his Faust as
“like Rosemary’s Baby, in the scene where they all meet in that
spooky building on the Upper West Side … [which] looks Satanic”. Similarly,
Choreographer and Associate Director Sarah Fahie alludes to “a Blue Angel version” of the Faust legend: Joseph von Sternberg’s
1903 film starring Marlene Dietrich. “Faust was the professor in The Blue Angle and the whole sequence by the Elbe was the club in
the film …” One might agree that Berlioz’s Faust would lend
itself to cinematic presentation; one recalls the much-admired 2009 staging
at the Met by QuÈbec playwright, director and actor Robert Lepage, whose
fusion of sound and image was summed by the appropriately allusive term
‘techno-alchemy’.

But, Jones and his designer Hyemi Shin rely on more mundane means, sliding
kitchen tables, blackboards, doors, trees and other props on and off the
stage to suggest the different locales visited or remembered by Faust, or
dropping them from above: the cottage where Marguerite lives with her
mother descends from the flies, as do the three lampposts that form a
backdrop for the aforementioned ‘D’amour l’ardente ?ame’. 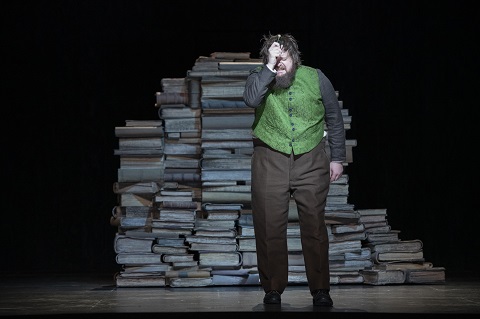 There are plentiful recurring visual symbols: a portrait of the King of
Thule, into whom Faust morphs at the close, sporting a scruffy white
ti-shirt that spouts blood; a photograph of Marguerite, visible in the
military students’ desks as they slam the lids up and down, disrupting the
hapless Faust’s lessons on Romantic poetry, and posted on the front page of
the newspapers held up by the chorus in the balcony, proclaiming her a
Murderess. Jones deliberately bleaches such imagery of any Romantic
idealism or lushness: it’s all broken and bereft, ugly and passionless.
Even during their ‘love-making’, Faust and Marguerite have to be directed
by the demons to slap a buttock, clutch a breast, thrust a hip.
Marguerite’s mother shuffles back and forth in pink slippers and a stupor,
drugged by the daughter who holds a tankard to her lips and roughly pours
poison down her tilted neck.

Berlioz’s Faust is not Goethe’s over-reaching idealist who longs for the
knowledge which is truth; instead, he is a man consumed by
boredom, a man whose response to music – such as the Easter hymn which
draws him back from the suicidal brink – is the sole thing that keeps alive
transcendent desires which, however, remain unfulfilled. Scholar Daniel
Albright has described this ‘anti-Goethean’ Faust, as a sort of ‘dead frog
seeking Prof. Galvani for an electric charge’, and Allan Clayton seemed to
embody such a figure at the start: listless, apathetic, heedless of the
future. Though introspective, he was pulled from his inward gazing by
external objectivities. This is a big sing and Clayton mounted a valiant
essay, singing with earnestness and dramatic nuance; but he doesn’t have
the high notes for the role, and this further diminished Faust’s already
fragile heroic dimension.

The role of Marguerite is not enormously interesting for a singer:
essentially passive, Marguerite has to be both sublime and real. While
Julie Boulianne conveyed her innocence, it was a purity of a rather vacant
kind. And, a reticent one: perhaps intended to infer delicacy and sweetness
of character, the effect was disengaging, particularly as Boulianne’s
enunciation was so poor. She grew in stature, strength and warmth in the
post-dinner-interval Part IV, however.

Purves sang with a lovely seductive colour and nobility of line – not all
that apt for the dark fiend, but pleasing to the ear, nonetheless. And,
this MÈphistophÈlËs was a winner. Marguerite’s apotheosis was presented as
a self-deluding indulgence of the disorientated Faust’s imagination; as
MÈphistophÈlËs nonchalantly conducted ‘his’ choir of angels, it was plain
who was calling the shots. As Brander, Ashley Riches dangled a rat before
the terrified Marguerite with wicked glee and sang with assurance.

Conductor Robin Ticciati’s approach was perplexing. Carefully, oh so
carefully, he gently teased out the nuances but so delicately, making us
strain to hear the details, that we barely sensed the desire that the music
communicates. The ‘big’ moments sometimes made their mark, but given the
restrained, rarified tenor of the whole, the effect was one of
discontinuity and disruption, adding to the incoherence of Jones’s
conception. 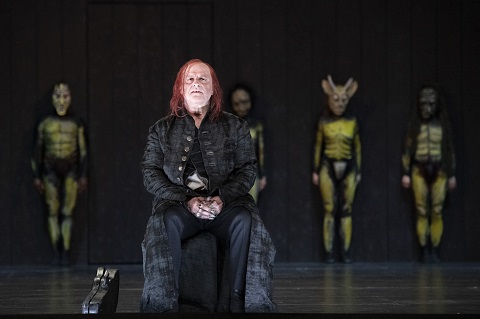 But, then, any semblance of theatrical or structural coherence was
unfortunately destroyed by Jones’s final coup de thÈ‚tre. With the
curtain re-raised and MÈphistophÈlËs apparently preparing to take his
applause, we were halted in our tracks by the fiend. Just when I’d been
reflecting that it was a pity that the dancers – who had largely just
shimmied across the stage pushing props and set – had had so little to do,
MÈphistophÈlËs demanded that, after the ‘entertainment’ he had provided,
his band of devils should reciprocate. So, now came the Minuet of the will-o’-the-Wisps (which is itself a musical
quotation from MÈphistophÈlËs’ serenade): a wild dance of Dionysian
ascendancy. Berlioz ensures that Faust’s ideal, though unfulfilled, is kept
alive at the close by the transfiguration of Marguerite: here, Jones
stamped on such an ideal with hob-nailed boots and cruelly confirmed that
it was as dead and buried as the dancing demon’s leaps were high and free.

Where does that leave the audience? How are we, like Faust, to be lifted
from despair? To what are we to aspire? Jones’s vision was not simply
bleak: just as Berlioz’s Faust is worn down by “mon ennui sans fin”, so, by
the end of Jones’s production, was I.