There are indeed some elements of historical realism. On 17th July 1794, the poet AndrÈ Chenier was taken by tumbrel from his cell in the Prison Saint-Lazare in the 10th arrondissement, in which he had been incarcerated since
7th March, to what is now the Place de la Nation (known as the Place du
TrÙne-RenversÈ during the Revolution). Earlier that July day, he had
been convicted of being an ennemi du people. He was one of the last
people to be executed by Maximilien Robespierre, who was himself
guillotined just three days later, during a period of chaotic violence
which saw, in one 46-day period alone, nearly 1300 succumb to the
guillotine’s slicing finality.

But, the verismo operatic ‘school’ does not equate with realism. Yes, Andrea ChÈnier gives us some anthems and songs – the ‘La
Marseillaise’ and ‘«a ira’ among them. And, Luigi Illica’s libretto,
inspired by the life of the French poet AndrÈ ChÈnier (1762-94) does draw
upon historical and fictional documents such as the 1819 notebooks of Henri
de Latouche, ChÈnier’s first editor; Jules Barbier’s 1849 drama about the
eponymous poet-philosopher’s tragedy; and the Goncourt brothers’ History of French Society during the Revolution of 1854. Some of
the numbers, such as the eponymous protagonist’s ‘Un di all’azzurro
spazio’, which fuses revolutionary anger with poetical euphoria are derived
from ChÈnier’s works (in that particular case, the 1787 Hymn to Justice). And, Giordano’s opera was a success in its day,
perhaps because the battle-cries of the risorgimenti were still
ringing in the air, and many a European monarch of the day was a victim of,
or anxious about, an assassination attempt.

But the political context, which is so present in Massenet’s ThÈrËse or Poulenc’s Dialogue des Carmelites is blanched
from Giordano’s ‘revolutionary’ opera. This is no surprise: the
‘verismists’ customarily modified history, particularly as their focus
shifted from low-life suffering to exotic glamour.

So, it is neither surprising nor inapt that David McVicar’s ROH production
for the ROH, revived here for the first time, is more a BBC Sunday-night
television period-piece than republican bloodbath, for all the splashes of
verisimilitude – one drop-cloth proclaims Robespierre’s damnation of
ChÈnier: ‘Even Plato banned poets from his Republic’. 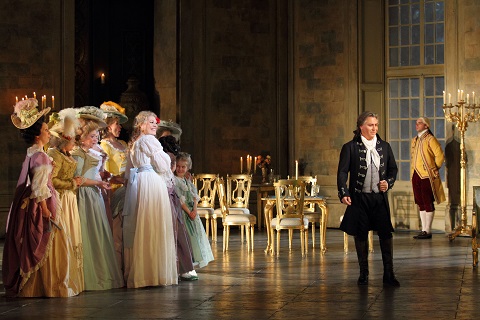 Though many have denigrated its shortcomings, Giordano’s opera has its
merits, not least an economical and swift libretto by Illica, that conjures
a dramatic sweep across varied locale and confines its protagonists to ever
more oppressive and limiting domains: from ancien rÈgime pleasures
to the austere deprivations of prison; from public tribunal to the
scaffold.

Revived for the first time, McVicar’s 2015 production tells its tale
straight and plumps for designer-realism: even the san culottes look
designer-attired. Low-hanging chandeliers glisten; gavottes are danced with
an ironic lack of class-crossing awareness. Perhaps there are some
political points being made here, but if so they make a weak impression.
Robert Jones’s sets impress with their sumptuousness and adaptability, not
for their subversion. 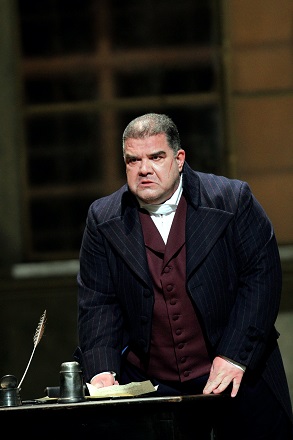 , Jonas Kaufmann picked up the quill and defied the interrogation of
Robespierre’s terrorists. On this occasion it was the turn of Roberto
Alagna, marking his 100th performance at Covent Garden. Despite
the present-day dearth of tenors equipped for the challenge, the three
arias for ChÈnier -among the finest written for a ringing Italian tenor –
have contributed to the opera’s ‘survival’ in the ‘canon’. And Alagna
certainly has the necessary heft and volume. If that was all he delivered,
then who are we to complain. The role lies low, yet Alagna had no problem
finding the required declamatory pressure and projection in his baritonal
range, and the high notes were true, sustained and sure. This ChÈnier may
have been missing a bit of musical ‘poetry’ but there’s a lot to be said
for security – even if it isn’t particularly ‘revolutionary’. Alagna’s
self-defence at the Terror tribunal, ‘SÏ fui soldato’, was a compellingly
proud confrontation with death.

Dimitri Platanias communicated all of the footman (and rival of ChÈnier)
Carlo GÈrard’s complexity and inner struggles with conflicting loyalties
and motives. His manner was a little rugged, but that’s probably true to
the role. Platanias had the rawness of an Iago in the more declamatory
episodes, while in ‘Nemico della patria’ the baritone wrung every drop from
every note.

As Maddalena di Coigny, American soprano Sondra Radvanovsky exhibited a bit
of a ‘wobble’ at the climactic highpoints but was wonderfully expressive
when singing quietly – which she was not, fortunately, disinclined to do.
Her narration of her mother’s tragic death, ‘La mamma morta’, was
beautifully executed: compelling, replete with pathos and sincerity. Her
duets with Alagna, particularly that at the close of Act 2, were gripping –
there was some chemistry here – and dramatically and musically uplifting,
as they should be. 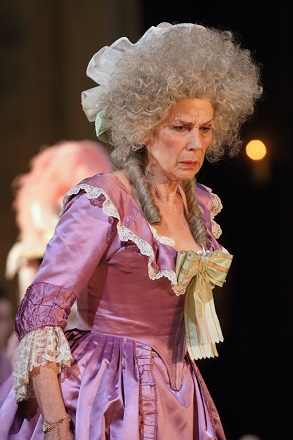 The choral scenes had great energy, and lyrical fervour; and those in the
minor roles – Rosalind Plowright as Countess di Coigney (on the eve of her
70th birthday!), Christine Rice as Bersi, Stephen Gadd (as
Pietro FlÈville) and Aled Hall (as The AbbÈ) made a strong impression.
Conductor Daniel Oren didn’t tap the suavity of the score – the overall
effect was as rough and ready as GÈrard’s complaints – but he kept things
moving along.

In comparison with the political (and social) meltdown that is imminent as
our the lower House attempts to negotiate its own ‘revolutionary’ path,
this production may seem more reactionary than revolutionary; but, Alagna et
al deliver the goods and there’s a sumptuous sheen that glosses historical
grimness and gore.