HGO describe Partenope as an ‘opera not so seria’ and it
certainly spices seria conventions with gentle parody and
self-parody. With history and heroism losing favour with the London public,
Handel embarked on a period of experimentation that was to result in
masterpieces such as Alcina and Ariodante, and Partenope – described by Handel scholar Winton Dean as an
‘anti-heroic’ opera – was a step in this direction. One of the
first works to be produced by Handel’s newly re-organized company, it was
premiered on 24th February 1730 at the King’s Theatre.

Given the long reign of the period’s era-defining monarch, HGO’s Victorian
setting seems apt. After all, Partenope tells of a presumed
episode in the history of the mythical founding Queen of Naples, a monarch
who was just as determined as Queen Victoria – who proposed to her beloved
Prince Albert on 15th October 1839 – to take matters of love and
war into her hands. Pursued by three suitors – Arsace, Armindo and Emilio –
Partenope wears the figurative pants, while Rosmira, abandoned by Arsace,
literally dons the trousers, disguising herself as Eurimene in order to
seek revenge and win back her fickle beloved.

In a sense, the Victorians didn’t just love to be beside the seaside, they
invented it. A refuge from everyday routines, the pleasure piers offered
new entertainments – acrobats, carousels, Punch & Judy, donkey rides –
and the laced-up middle classes relished the chance to indulge in some
unbuttoned fun. The stiff-upper-lipped Brits imbibed the sea air and cast
off both their crinolines and their inhibitions in the bathing machines.
Ladies could flirt with their parasols as they flaunted their new outfits
along the promenade. The young chaps could peer through telescopes at women
descending into the sea.

And so, during the overture, when Arsace and Rosmira arrived at sands
glistening in the glare of the mid-day sun (lighting design by Daniel
Carter-Brennan), Arsace was only too pleased to kick off his tight leather
shoes, fling aside his tweeds and let his hair down in a game of beach
volley-ball with a rumbustious gang liberated by their stripy bathing
costumes. Meanwhile, Rosmira slipped out of her high-necked blouse and
ankle-length skirt into the leggings and tunic she found conveniently
hanging in a nearby changing booth, and assumed her gender-crossing
disguise. 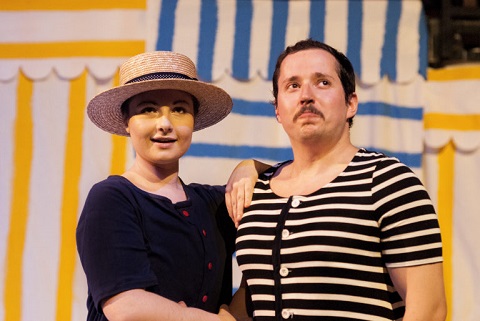 In the event though, for all director Ashley Pearson’s interesting and
earnest comments about the concordance between the preoccupations of Partenope and Victorian mores – the clash between ‘strong social
morality and a desire to be free’ and between ‘public persona and private
desire’ – the action of the opera playfully took its course without the
Victorian setting contributing any significant impact or meaning. But, it
served an dramatically efficient and visually appealing purpose. Laura
Fontana’s set design had the virtues of economy and simplicity: blue and
yellow striped bathing tents formed a jolly backdrop to the strip of strand
upon which the action unfolded.

Romantic suitors played musical deckchairs as they strove to win
Partenope’s heart. Battles with buckets and spades ensued. The azure sky
remained cloud-free but the warring characters faced shadows and storms,
until female common sense unravelled the romantic knots. The arias ofPartenope are generally briefer than conventional da capo marathons and the scuffles and shenanigans whipped along
breezily. I did wonder, though, whether HGO’s decision to present the opera
(the original 1730 version) in Italian with surtitles was the right one:
given that we had travelled to one of the most English of environs, might
not the vernacular have been apt? Particularly as English text would surely
have carried clearly in the fairly small Jacksons Lane Theatre, without the
need for the tiny surtitle screen perched aloft the orchestral balcony,
upon which text was squashed in often miniscule script.

That said, the young cast – current students and alumni from the capital’s
music conservatoires – delivered some idiomatic Italian and sang with a
convincing grasp of Baroque style. Arsace is the chief object of gentle
ridicule in Partenope, but Hamish McLaren’s strong and sweet-toned
countertenor won some sympathy for the fickle waverer, communicating
Arsace’s growing self-knowledge and genuine suffering in Act 2’s ‘Fatto Ë
Amor un dio d’inferno’ and proffering a beautifully crafted plea for
forgiveness in Act 3 (‘Ch’io parta?’). 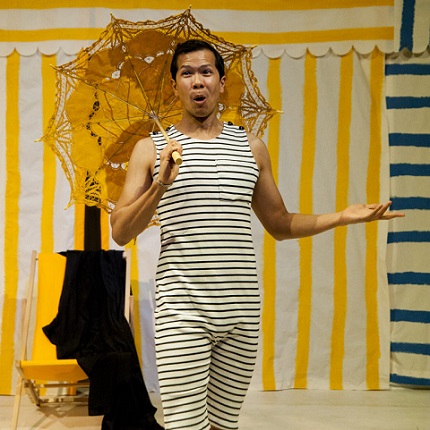 As the object of the men’s affections, Kali Hardwick was a fiery and
spirited Partenope. Her characterisation of the be-turbaned beach-queen was
sustained and compelling: all sneering eye-brows and dangerously pointed
parasols. Her soprano is clear and has a nice glint – though occasionally
she pushed it a little hard at the top, and the edge hardened into
shrillness. Hardwick has a lot of power at her disposal, but she didn’t
always judge the acoustic and sometimes over-sang. Though the coloratura of
her first aria wasn’t entirely crisp, her voice later relaxed, the
precision improved; Partenope’s Act 2 aria ‘Qual farfalletta’ was
especially moving.

Rachael Cox exhibited a lovely warm lower range as Rosmira/Eurimene and
didn’t struggle at all with a role that dips down into the deep. She sang
with a sure sense of line, musical and dramatic focus, and an overall poise
that imbued the feisty revenger with an appealing integrity of spirit.

Erik Kallo’s Armindo was a snivelling cry-baby – the dupe on a comic
picture postcard – whose shoulders hunched and drooped with self-pity.
Fortunately, his countertenor had more backbone and colour than the
character he impersonated! Kallo sang with confidence and accomplishment,
as did tenor Peter Martin as Emilio – who comes to do battle with
Partenope, and then finds himself enamoured and warring instead with the
rival suitors. Martin has a pleasing, agile tenor; he executed the
coloratura with aplomb, and alone among the cast had mastered a Baroque
trill.

Saran Suebsantiwongse’s stuffed-shirt Ormonte couldn’t quite decide if he
wanted to be in on the fun or was disapproving of it, and the baritone
delivered his single aria persuasively. The choruses brought the cast
together in vigorous ensembles: ‘Viva Partenope!’ was a persuasive choric
salute.

Music director Bertie Baigent directed a 13-strong instrumental ensemble
playing on period instruments and tuned at Baroque pitch. The French
overture is one of stature, and there are several orchestral sinfonias
which the young musicians performed with confidence once the tuning had
settled down after a slightly ropey start. The long thin balcony above the
stage isn’t the most accommodating space, and sometimes the separation of
the obbligato woodwind (standing behind Baigent) from the body of strings
did not aid ensemble and intonation, but there was plenty of colour and
energy.

Despite its general good humour and humorousness, there are serious strains
of satire and sexual tension in the opera which Pearson’s
production didn’t really tap. But, HGO’s Partenope offers – as the
Victorians would have appreciated – levity and laughter: a pleasurable
‘day-trip’ to the seaside.