The dedication was a paean to the head of the Roman Catholic Church: “the
most holy father, our lord Clement VIII, most excellent and great Pope.
Most blessed father and most merciful lord”. But alongside such pragmatic
and politic declarations lay more personal expression: “these tears of
Saint Peter … have been clothed in harmony by me for my personal devotion
in my burdensome old age’ (per mia particolare deuotione, in questa mia
hormai graue et‡).

For his texts, Lasso chose 20 of the 42 octava rima stanzas which
form the poem of the same title by Luigi Tansillo (1510-68).
Tansillo’s poetry describes not the act of denial itself, as dramatized in
Bach’s Passions, but rather the psychological after-effects of the agonised
glance given by Christ to the apostle Peter, directly after the third
denial, as recorded in the Gospel of Luke: ‘At that moment, while he was
still speaking, the cock crowed. The Lord turned and looked at Peter. Then
Peter remembered the word of the Lord, how he had said to him, “Before the
cock crows today, you will deny me three times.” And he went out and wept
bitterly.’

Peter then spends the rest of his life dwelling on his cowardice and error,
living in the eternal moment of betrayal and longing for the release of
death. In Tansillo’s poems, Peter contrasts his sin with the beatitude of
the children massacred by Herod and goes to the site of Christ’s
crucifixion where recognition of his undeniable and ineradicable cowardice
overcomes him. He retreats to a cave and spends his remaining days
repenting and, since self-forgiveness is impossible, yearning for divine
grace.

The stanzas set by Lasso focus solely on the lacerating glance of Christ
and its tormenting effect on Peter. Numbers 1 to 12 are concerned with the
piercing power of Christ’s glance, with the act of betrayal recalled in the
first four stanzas. The remaining 8 numbers tell of Peter’s self-rebuke;
from number 15, the third-person voice is replaced by Peter’s own. There is
no ‘narrative’ as such; rather the drama is internal, enacted with Peter’s
soul.

In 1559, the Vatican placed Tansillo on the Forbidden Index: his Lagrime prompted an official pardon from Pope Clement VIII. It is
tempting, and credible, to view Lasso’s Lagrime as an expression
of the aging composer’s own individual penitence – and this is the reading
adopted by Peter Sellars, the director of this kinaesthetic interpretation
of Lasso’s composition, presented by the Los Angeles Master Chorale at the
Barbican Hall. After all, the composer’s physical and mental state in his
final years is documented in deed and letter: in the form of a pilgrimage
to the Holy House of Loreto in 1585 and an appeal from his widow Regina to
Duke Wilhelm of Bavaria attesting to her late husband’s ‘melancholia’ – on
one occasion, he failed to recognise his wife, spoke often of his death and
was afflicted by sleeplessness and ‘fandasey’ (fantasies).

Others, though, including scholar Alexander Fisher

, view Lagrime in broader contexts: as a meditative
process that ‘served the ends of contrition for sin and, ultimately,
penitance’, and thus representative of post-Tridentine ‘sacramental
discourse’. Fisher notes that common to post-Tridentine Catholic meditation
‘is the devotee’s awareness of sin, lengthy mental examination of its
nature and consequences, and implicit or explicit resolution to make
amends, culminating in cathartic moments of dialogue with a divine
figure.’: ‘What is clear is that the Lagrime resonates deeply with
a specific brand of religious devotion that was assuming a dominant
position in Counter-Reformation Bavaria.’ Fisher views the closing Latin
motet, ‘Vide homo’, which follows the 20 madrigals as the conclusion of the
‘dialogue between individual sinner and saviour that was so central to
these methods. For those skilled in music, the steady ascent through the
modal system, culminating in the unexpected A durus [mode] as Christ
responds to Peter in person, would probably have strengthened the
impression of the Lagrime as a kind of spiritual journey leading
inexorably from the consciousness of sin to that moment in which all sin
was washed away’. 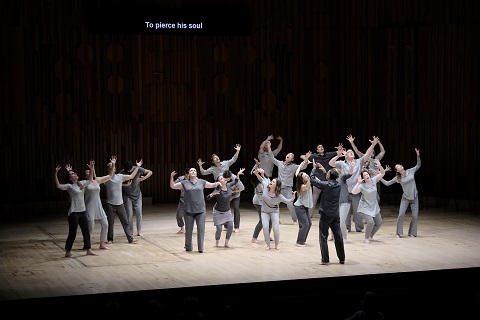 I allow that I digress here from the immediate purpose of this review but
feel the need to do so in the light of Sellars’ adamant declaration that,
“At this point in his life [Lasso] does not need to prove anything to
anyone. He is [composing Lagrime] because this is something he has
to get off his chest to purify his own soul as he leaves the world. It’s a
private, devotion act of writing, but these thoughts are now shared by a
community – by people singing to and for each other”. Arguing that the
chorus “carries the drama forwards”, Sellars suggests that the work accords
with the ancient Greeks’ understanding of tragedy, “which I could also call
an African understanding, where an individual crisis is also a crisis of
the community”. We hear one man’s thoughts, but it is the community that
absorbs them “and has to take responsibility: a collective takes on this
weight of longing and hope”.

Okay. Perhaps I should not have read Sellars’ ‘explanations’ in the programme article – an extensive,
very informative historical, contextual, musicological and interpretative
account by Thomas May – before the performance itself. The latter was much
more persuasive.

Three singers are assigned to each of Lasso’s seven vocal parts. The
bare-foot singers are dressed in drab grey and mauve legging and slacks,
shapeless tunics and ti-shirts. I was surprised to find Danielle Domingue
Sumi credited as ‘costume designer’ – especially as conductor Grant Gershon
(also barefoot, in black) explains that they strove for ‘clothes that look
like they could come out of anyone’s wardrobe’: I thought they had. But, I
guess the drab attire reflected the blanched landscape of Peter’s
psychological wilderness. And, it allowed the singers to move naturally
around and across the Barbican Hall stage.

For, this is what Sellars conceives as a physical and kinaesthetic
representation of polyphony which is “totally sculptural”: the “muscular
intensity in Lasso’s writing [that] is reminiscent of this expressive
language we know so well, visually, from Michelangelo […] the muscle of
spiritual energy and striving against pain to achieve self-transformation”.

So, ritualised movements, complemented by surtitles in colloquial
vernacular, are designed to conjure the sculptural majesty of Renaissance
art and architecture. And, how impressive the Los Angeles Master Chorale
were in delivering harmonically and contrapuntally complex madrigals, their
voices blending seamlessly and mesmerizingly, all the while adopting
geometrical formations, pairings and poses; lying down, and sitting up;
standing alone in alienated misery and clutching colleagues in warming
consolation. Jim F Ingalls’ lighting followed the psychological
modulations, now bleached white, now cool aquamarine, then fertile gold, or
warming orange. Oh, yes; they had memorised the entire sequence – nearly 90
minutes of music. 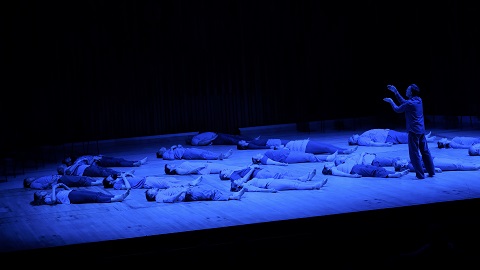 Would it have been preferable to have a single voice to a part? Perhaps I
would have liked greater presence from the soprano voices? And more shading
and variety of tempo? But Peter’s agonies were intensified by the smooth
sweetness of the collective lyrical expression. And, the attention to the
electric charge igniting the poetical text and detail was masterful, in the
madrigalian manner, and physically impressive. At the close of the 15 th madrigal (‘V·ttene, vita va’ – Life, get you gone), the
chorus lay down, forming a crucifix: “Afraid to die, I denied life,” Peter
admits. How could the LAMC sing with such unified ensemble and sure
intonation from such a position?

The physicality of the performance was emphasised by sudden silences and
shifts, mimicking Peter’s psychological ups and downs. Some were dramatic,
others disruptive. I couldn’t help but recall the simplistic clichÈs of
school drama lessons at times. “The deadliest arrows that pierced his heart
were the eyes of the Lord, when they fixed on him …” prompted a collective
collapse to the floor (and, the singers stayed in tune …). There was much
handwringing, chest-clutching, colleague-embracing. When, for the final few
madrigals the singers retreated to chairs placed left and right, I felt
some relief.

Lagrime
closes with a Latin motet, setting the 13th– century French poet
Philippe de GrËve’s representation of Jesus’s final words: a plea for
mankind to behold the Lord’s suffering – ‘Vide homo, quae pro te patior’
(Behold, man, how I suffer for you). The Lagrime, thus, end not
with consolation but with rebuke: we do not transcend despair. Fisher
argues that ‘Christ’s rebuke … is consistent with a reading of Lasso’s
cycle as systematic meditation: the Lagrime, after all, concludes
with the reflection on sin and does not proceed further into the
illuminative and unitive.’ 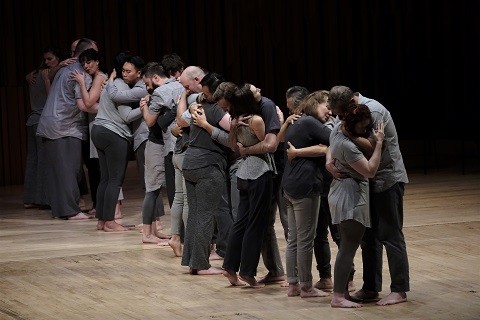 So, an accusing voice confronts not just Peter but mankind. But, Sellars
interprets such words as spoken in love: the chorus rise from their chairs
and embrace one another.

In cathedral naves, the human narrative of such works as Lagrime
can be lost; as the polyphony swirls around the vaulted ceilings, words are
lost in an embracing blend designed to render the individual receptive to
the divine. Sellars focuses on the psychological rather than spiritual,
setting the transience of human mortality against the almost unbearable
eternal present of the consequences of our actions. And, his reading is not
without power and pertinence.