The latter’s set designs emphasise intrigue and betrayal. Dark panelled
walls loom high, imposing bulwarks which shield in secrecy assassins and
illicit lovers alike, then swivel exposing treacheries, or open up
crevasses through which the guilty can slip away. In Act 1 Scene 2, Simon
Corder turns the timber transparent, and through the eerie blue mists we
watch a menacing dumb-show of murder.

There’s no specificity of ‘place’: the panels are not particularly
‘Swedish’ or ‘American’, but they blend effectively into the Jacobean
Holland House beside which the Opera Holland Park theatre-tent nestles.
The ‘tone’ is not especially regal either. 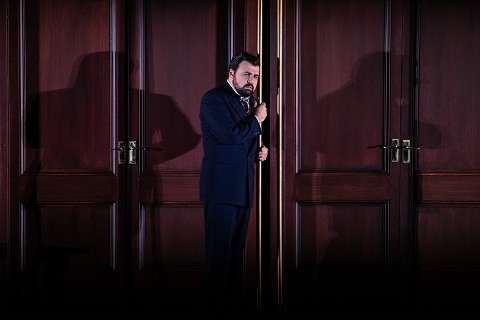 This Gustavo is not an autocratic,
profligate monarch who abolishes the privileges of the nobility and is
challenged by a mutinous aristocracy. The motives driving Ribbing’s and
Horn’s assassination plot are personal not political: a beloved stolen, a
brother scorned. Gaitanou elects to set the tragic love triangle of
Gustavo-Amelia-Anckarstrˆm in the early 1950s. The men are dressed in
trench coats and trilbies; the women wear frocks and felt hats. 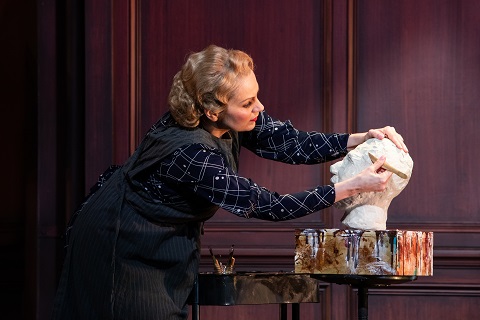 Not all of Gaitanou’s ideas ‘makes sense’, alone or in combination. Why are
Gustavo and his peers practising their lunges, parries and ripostes during
the overture? The fencing masks may foreshadow the carnivalesque masques of
the final scene, and the cuts and thrusts are rhythmically in tune with the
vigour and tautness of Verdi’s score, but the ÈpÈes and sabres don’t make
any further appearances. Why is Amelia a sculptress? We see her, beside her
easel in her studio, working on a clay bust: is she sublimating her erotic
desires into art? When her deceived husband later dashes the sculpted head
to the floor, is this a symbol of the violence he will do to the real-life
Gustavo? And, when sent to the gallows to find the herb that will cure her
of her forbidden desires, why does Amelia head to hospital and check into a
clinic? When the lovers are interrupted by Anckarstrˆm, she’s forced to don
a nurse’s uniform and hide behind a perilously flimsy surgery screen. 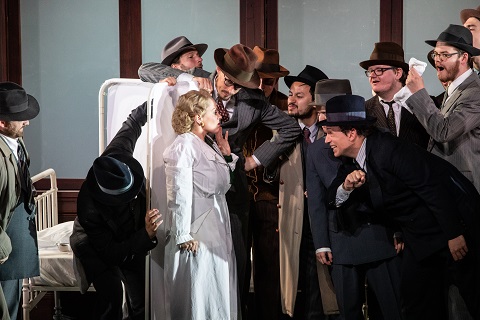 None of this matters, though. The singing is so uniformly strong and
persuasive that we’re swept along on the increasingly tragic trajectory.
Similarly, conductor Matthew Kofi Waldren – who impressed so much in


last year – exercises acute control over the pacing and ensures that we’re
enthralled. The musical temperature of each moment is brilliantly judged,
and varied; and the passion is as much driven by rhythm as it is by melody
or colour.


– made for an impressive central pair of doomed lovers. Duprels employed a
dynamic and expressive range of colour in ‘Ma dall’arido stelo divulsa’,
when riven with conflicting desires – to submit to or to silence her love
for Gustavo – and sang with truly affecting power in ‘MorrÚ, ma prima in
grazia’, when pleading with her murderous husband to be able to see her son
for one last time (though the baby boy is bound up in such a bumper bundle
of swaddling that he looks as if he must be at least five years old!). 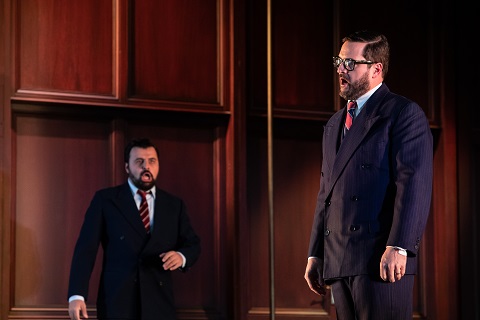 George van Bergen’s imposing Anckarstrˆm burned with feeling from his first
to last utterance, his baritone bristling with emotion when he warned
Gustavo of the imminent danger to his life and blackened by anger and pain
when he vowed to gain vengeance for his former friends’ betrayal.

, who took the title role in last year’s OHP Young Artists performance of La traviata, is a lively Oscar, as agile vocally as she
is light on her feet. This was a vivacious and good-natured Oscar, whose
genuine fondness for Gustavo was worn proudly on his white shirtsleeve.
Langer’s soprano shone strongly and vibrantly, and her tall figure and
graceful movement ensured that Oscar was both more engaging and a stronger
presence in ensembles than is sometimes the case. 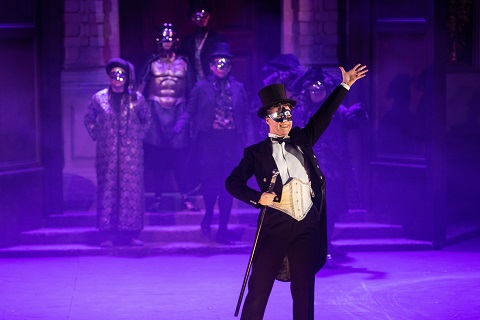 As Madame Arvidson, brandishing an elongated cigarette holder and sporting
an astonishing geometrical fascinator, Rosalind Plowright looks like a
cross between Marlene Dietrich and the Queen of the Night and she relished
the medium’s outlandishness. John Savourin (Horn) and Benjamin Bevan (Ribbing) were convincingly nasty conspirators, while Ross Ramgobin was a lively Cristiano, the sailor whose fortune is foretold by Madame Arvidson. 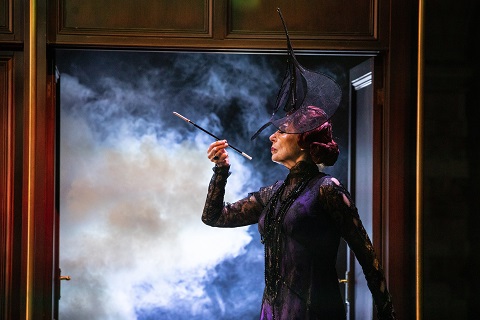 The eponymous revelry is a riot of costumed drama: I think I spotted
Napoleon, Charles II, Anne Boleyn, a Japanese geisha, a Roman centurion, a
musketeer and a highwayman amid the sparkling black and gold crowd. It was
a pity, perhaps, that Gaitanou did not swing back the panels at this point
– one thing the wide stage at Opera Holland Park is surely good for is a
grand ball? But, pushing the cast forward to a narrow strip at the
forefront of the stage, Gaitanou both sustained the sense of intrigue, the
panels concealing treacheries just as the masks obscured identities, and
ensured that our focus at the close was on the dead Gustavo, draped across
a white stone ‘altar’, his desolate Oscar at his feet.