His critique of prevailing social values is treated by Mozart with
lacerating humour. No surprise that Beaumarchais’s original play La Folle JournÈe ou Le marriage de Figaro was
banned by King Louis XVI in 1784, or that Nicholas Till in his Festival
programme article ‘The Quintessential Revolutionary Artist’ suggests
Napoleon Bonaparte considered the play to have been “the first step towards
the French Revolution”.

Mozart and Beaumarchais are uproariously subversive, yet this new
production from Martin Lloyd-Evans manages to amplify both social power
struggles and adulterous intrigues with great wit (not least in its
Shakespearean cross-dressing and lecherous scheming) and pointedly
highlight issues lurking beneath a seemingly respectable surface. There’s
an undeniable sense of unease looming over this comic farce, less
associated with the abuse of privilege – the Count’s claim to feudal rights
over newlyweds is bad enough – more the dark underbelly of domestic strife
exemplified by suggestions of alcohol addiction, self-harm and
wife-beating. It’s not exactly black comedy but shades of charcoal
repeatedly make a lightning strike just as you’ve been laughing at
Cherubino hiding in a closet or Antonio believing he/she has suddenly grown
taller as Figaro claims to have leapt from a bedroom window.

Despite the elegant period costumes and conventional designs mostly of
flats and screens (respectively Kate Lyon and Tim Reed), contemporary
resonances abound, aided and abetted by some well-defined performances of
which some are outstanding. Chief amongst these is Toby Girling’s brutish
Count Almaviva whose pugnacious, Putin-like features add much to his
power-obsessed portrayal which detonates with explosive force in his Act 3
rage aria – a defining moment where his lust for vengeance is truly
psychotic. Allied to a strong stage presence is a robust, well-projected
baritone, flexible enough to furnish menace and warmth but his insidious
bullying leaves you in little doubt of a disturbing nature. 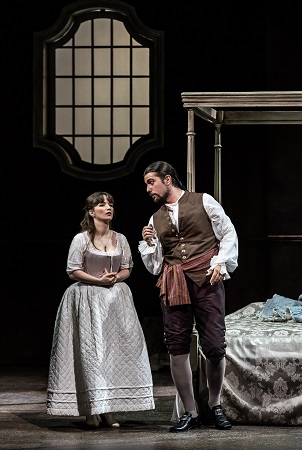 The Count’s adversary, Figaro, sung by Roberto Lorenzi is no less
convincing vocally (with an emphatically delivered ‘Se vuol ballare’) yet a
little old-fashioned in expression and gesture. His performance underlines
the ease with which Ellie Laugharne creates a vibrant Susanna, impressing
as a feisty no-nonsense wife-to-be in the opening duet, and thereafter
determined to thwart the Count’s libidinous schemes, while also making sure
her beloved toes the line. It’s a full flesh-on-the-bones characterisation
that contrasts sharply with Simona Mihai as the neglected and emotionally
crushed Countess. (Full marks for the sense of resignation achieved here
but are we to believe an 18th-century Countess would not turn a
blind eye to a husband’s philandering?) Her ‘Dove sono’ was beautifully
sung but I was unmoved.

Of the smaller roles Rowan Pierce is an enchanting Barbarina who commands
the stage with her winning glances and in just a handful of lines sings
with effortless assurance to deliver a memorable cameo. Wallis Giunta as
the handsome gender bending Cherubino also holds the ear and eye and
superbly imitates a hip-swinging gait when dressed as a woman while
supposedly being a boy – it’s all brilliant buffoonery. Her two arias are
nicely turned out too, with lots of adolescent frustration in ‘Non so pi˘’
and ardour in ‘Voi che sapete’ both crowned with rapt tone. 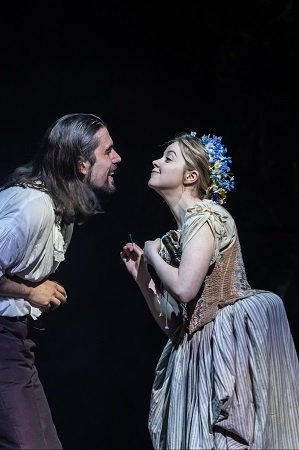 There are some distinguished moments too from Louise Winter as the
manipulative then motherly Marcellina who comes into her own with her Act 4
aria. Just as compelling are Jonathan Best’s sturdy Dr Bartolo and Ben
Johnson’s dapper Don Basilio who has much more than music-making on his
mind every time he sees Cherubino. What a joy, too, to have that dramatic
stalwart Richard Suart as the elderly but beady-eyed Antonio – a gardener
very much the equal of his superiors.

Below stairs (as it were) the Academy of Ancient Music rose fitfully to the
occasion. Notwithstanding an indifferent Overture, the orchestral playing
under the helm of Richard Egarr steadily improved and eventually blossomed
with some Mozartian magic in the Act 3 wedding festivities. But it was
above stage which drew the most consistent and classy music-making.