This is Longborough Festival Opera’s Das Rheingold and the first
instalment of the complete Ring-cycle up until 2022. It’s also Polly Graham’s
second season as Artistic Director of the festival established by her
parents in 1991 – a founding year that was to bring an operatic dream of a
British Bayreuth to reality. A first Cotswold Rheingold in 1998
heralded a Wagnerian Eden. It’s not been a smooth ride – early on a critic
considered ‘Mr Graham will give more pleasure by being less ambitious’ –
but history has proved otherwise and the intimate space of Longborough’s
500-seat theatre (salvaged from Covent Garden) is no barrier to artistic
enterprise or a composer’s gargantuan vision. If anything, Longborough’s
limited dimensions admirably suits Rheingold’s text-laden outlines
where its creative energies (unfettered by the absence of technical
wizardry) can be distilled through depth of characterisation and powerful
musicianship.

These qualities were abundantly present in this performance under director
Amy Lane, and central to its success was the Wagner specialist Anthony
Negus whose immersion in the composer’s operas and nearly two decades of
conducting them at Longborough have provided one of Britain’s most
authoritative and respected exponents. There was a real grasp of musical
architecture when I caught up with Rheingold on its third night
and the music’s ebb and flow took hold from the start. Longborough Festival
Orchestra built through the opening Prelude with accumulating grandeur and
arrived at the work’s final climatic bars unscathed and uninterrupted 150
minutes later. There was barely a fluffed horn and the whole was
scrupulously well-balanced and vividly coloured. 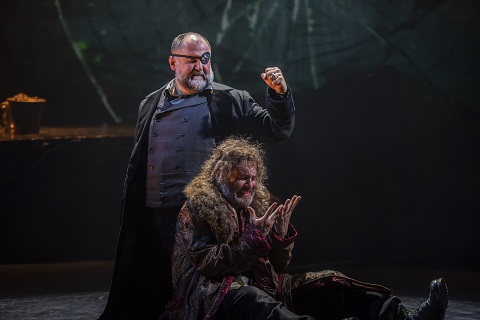 With designs from Rhiannon Newman Brown, the set was periodically colourful
too, and behind the stage’s rising mountain paths with low central summit
were Tim Baxter’s effective video projections, both naturalistic (a swollen
river Rhine) and abstract (swirling patterns). Set and screen together
evoked the murky depths of Nibelheim and the Rhine, while emerging from
towering clouds was a rather impressionistic Valhalla, suggestive more of a
limp sandcastle than an intimidating fortress. By contrast, the smelting
furnace down in the bowels of the earth was intensely conjured and brought
to mind The Great Day of his Wrath by the English Romantic painter
John Martin – an apocalyptic vision of destruction from the early 1850s –
coinciding roughly with the period of Emma Ryott’s sombre costumes and the
composition of Das Rheingold. 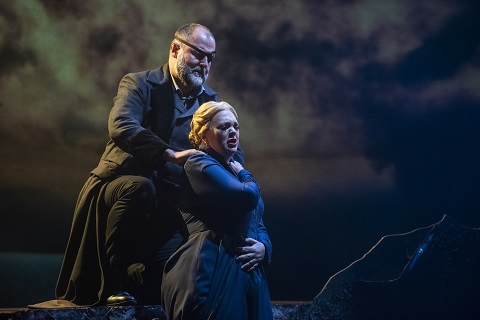 Designs and costumes aside, what really lifted this Rheingold into
something almost revelatory was the standard of acting and singing – albeit
not uniformly excellent, but with enough definition to repeatedly draw the
ear and eye towards several outstanding performances. Chief amongst these
was Mark Le Brocq’s dodgy dealer Loge, whose crimson frockcoat and twirling
cane brought a whiff of a Victorian music hall MC. His ease of movement and
vocal projection were outstanding, his perfectly caught ambivalence
tailor-made for this role. His pirouetting laid bare Darren Jeffrey’s
stolid and authoritatively sung Wotan whose lumbering gait worked against
his impressive build, otherwise ideal as a ruler of the gods. More
convincing was the nimble and dishevelled Mark Stone as Alberich, utterly
persuasive in voice and single-minded ambition. His brother, Mime, was sung
by a clarion-voiced Adrian Dwyer who brought considerable energy to his
ensemble scenes. 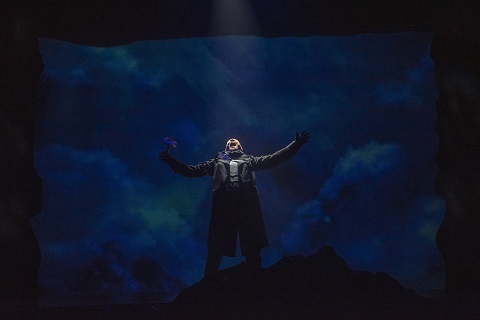 Arriving comically on decorators’ stairs the two giants Simon Wilding and
Pauls Putnins were sharply delineated as Fafner and Fasholt, and Wyn
Pencarreg and Elliot Goldie made a well- cast partnership as Donner and
Froh. Amongst the women Marie Arnet was a full-toned but anxious-looking
Freia, while Madeleine Shaw was an imperturbable and loving Fricka, grandly
elegant in looks and tone. So too were the three winsome Rhinemaidens –
Marie Wyn Williams, Rebecca Afonwy-Jones and Katie Stevenson – whose
singing stood out from their schoolgirl cavorting. But it was the
gold-plated voice of Mae Heydorn as the imploring Erda that left one of the
strongest impressions of the evening.

If this performance is anything to go by, the next three years will bring
queues to Longborough and when the entire cycle is mounted in 2023 this
rural idyll will be a Wagnerian heaven.