Unabashedly not a contestant in the Carmen wars (who can fit Merimee’s bloody tale most uncomfortably into a relevant contemporary context) Mme. Zambello sets her Carmen in a music hall somewhere. We see it as a sort of music hall revue of the numbers we know and love complete with lively production dance numbers. Like music theater there is spoken dialogue (a bit more than usual), the simple story is clearly told with no troubling nuances and there is not a drop of blood. On second thought this is about as far-out as a Carmen production could get.
But wait. There were more troubling aspects to the performance — Bizet’s Carmen was in fact further deconstructed. It happened in the pit. Former San Francisco Symphony associate conductor James Gaffigan, now a rising star on the world’s major stages, offered a bright, lilting overture, the always admirable San Francisco Opera Orchestra in resplendent tone. The rose red show curtain rose, Jose alone, desolate in a pool of light (he had already murdered Carmen, the story to be told in flashback) while Carmen’s famed fate motive flowed forth oh-so-sweetly at a mere orchestral forte (Mo. Gaffigan eschewed all sense of fortissimo throughout the ordeal). 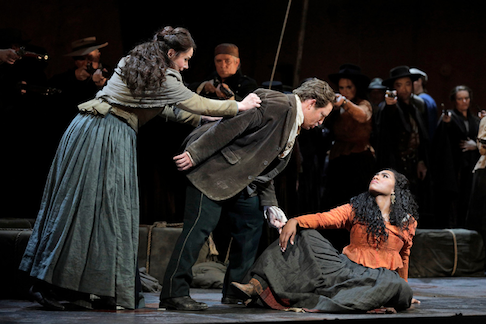 Anita Hartig as MicaÎla, Matthew Polenzani as Jose, J’Nai Bridges as Carmen
Further Carmen shock and awe (and there was a lot of it) happened in Jose’s Flower Song, Carmen (the very beautiful J’Nai Bridges) reclined down stage right in a pool of light — a perfect rose — while Jose (Matthew Polenzani in fine voice) tenderly related to the rose he held, the maestro enveloping Bizet’s brief postlude in the sweetest and loveliest possible colors, our two lovers in perfect, innocent and quite uncomplicated harmony. It was not ironic. This was a perfect love that simply got derailed.
One can only fear for the blood and guts of Verdi’s Ernani that this talented maestro will conduct in San Francisco Opera’s 2020 spring season.
Carmen dead on the stage, there was a final burst of glitz as Micaela, overlooking the tragedy from atop an orangey brown abstract structure meant to represent the exterior of the bull ring, threw blood red (finally some blood!) streamers along with clouds of confetti onto the estranged lovers.
With the stage director and the conductor in collusion the cast, clearly capable of far greater emotional range, diligently and effectively brought this strange Carmen to life. Mezzo-soprano J’Nai Bridges is young, sexy, vibrant, and dangerous, attributes that were as apparent in her voice as in her figure. She is a Carmen of exceptional musical finish. Her HabaÒera† and Seguidilla were spellbinding, the maestro clearly under the artist’s thrall, the orchestral accompaniment a mere hint of the beat, like the finest Rossini conducting.
Tenor Matthew Polenzani portrayed a simple, smitten-with-pure-love soldier. His light lyric voice easily avoided the treacheries of the role for heavier voices, voices that have easier potential to personify the more usual sexually charged love Jose has for Carmen. As it was it seemed that this Jose’s love for Carmen was as pure as his love for his dying mother. On the other hand tenor Polenzani was a resolutely virile, recent San Francisco Opera Hoffmann.
Romanian soprano Anita Hartig as MicaÎla fulfilled SFO’s claim to being an international house. This gifted artist of great presence brought a pure, silvery vocal sound to MicaÎla in exceedingly careful phrasing, attributes that created a character of utter innocence. This MicaÎla was never a foil to Carmen so much as she was the angel that oversaw the naive soul of a simple Spanish soldier. Hers was a performance indeed befitting a major stage. 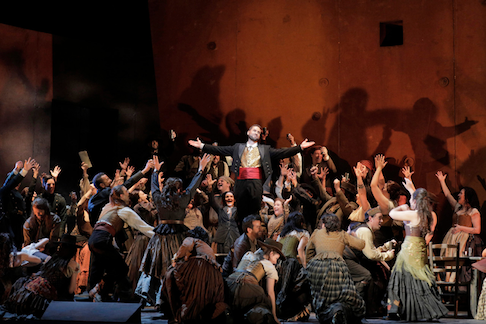 Kyle Ketelsen as Escamillo
Though not a flashy Spaniard, bass-baritone Kyle Ketelsen does cut a fine figure as the toreador Escamillo. He reads as physically strong and boasts an agility that easily could avoid a charging bull. The same could be said of his powerful voice and supple singing that he uses to actually create a character of depth, rare for this role usually played as a pure sex symbol. His third act fight with Jose was unsettling when all this magnificent virile physicality fell to Jose’s clumsy thrust.
The principal singers and the conducting were the elegance of the production. The actual staging and the lesser roles were clumsily rendered. Adler Fellows or equivalents were called upon to approximate as best they could the complex characters that complete Bizet’s drama, characters than can add intense emotional atmospheres to Carmen, but here did not. Unfortunately Natalie Image’s Frasquita was sometimes under pitch in the climaxes of the opera’s huge ensembles.
Mme. Zambello’s Carmen is music theater where action is controlled choreography and not spontaneous realism. There was incessant, staged movement, moreover in the complex fights movement was less than precise and usually ill timed, at odds with the rhythmic elegance emanating from the pit. The chicken and the mule of the original Covent Garden production have fallen by the wayside, leaving only the horse on which Escamillo arrives in Act II. One might envision a beautiful black stallion with an elegantly curved neck to second the imagined sleek figure of Escamillo. The War Memorial horse had none of these attributes, and should have been rejected by this toreador as an unsuitable nag.
The demagoguery (catering to common taste) of the production was blatant. Surely the San Francisco opera audience would prefer to be challenged with productions that stimulate the imagination and illuminate the human condition.
Michael Milenski