The decade when black-and-white was trumped by technicolour; when Mary
Quant’s mini-skirts liberated women, and when freedom of physical movement
was matched by new opportunities for women that would have seemed equally
outrageous just a few years before; when the legalisation of the pill meant
that feminine dreams and aspirations soared beyond marriage and motherhood.
The years which saw the rise of ‘second-wave’ feminism hardly seem an apt
moment in history to choose to tell a tale of the derision, punishment and
death of a ‘fallen woman’?

Second, given that it is the ‘gaze’ of her lovers and of society at large –
a gaze which objectifies her as something to be looked at, a bird in a
golden cage – which is the destructive force which drives Manon’s to
self-damage, despair and finally death, why do Sofulak and designer George
Johnson-Leigh give us so little to look at? “Heavens, how
beautiful she is!” cries Des Grieux when he sees Manon for the first time,
as the students reassure him that this “fair and divine angel

has come from heaven for your delight”. “She is too lovely!” marvels
Geronte. “Am I beautiful?” Manon asks herself as she anxiously awaits Des
Grieux’s arrival. Admiring herself in the mirror she delights, “Oh, I shall
be the most beautiful!” Surely, we should be as compelled by the spectacle
which is Manon’s tragic history as are those whose eyes are drawn to, and
mesmerised by, the eponymous heroine herself? 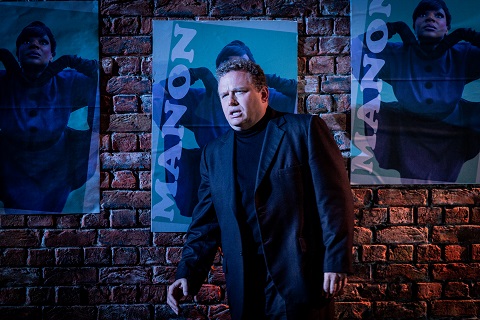 Sofulak and Johnson-Leigh eschew the four settings which Puccini’s team of
librettists drew from AbbÈ PrÈvost’s 1731 novel, L’Histoire du Chevalier des Grieux et de Manon Lescaut. This is a
pity as the original settings form four distinct tableaux which take us
from Amiens to Paris, on to Le Havre and finally to Louisiana, articulating
through the progression of time and place the stages of Manon’s tragedy,
and thereby binding the discontinuous plot.

Instead of the public squares in Amiens and Le Havre, we have a club-bar,
in Acts 1 and 3, where the ‘students’ party – singing, drinking, doing The
Twist, playing Twister (they don’t appear to be smoking marijuana or taking
LSD). Geronte’s sumptuous Parisian salon is replaced by a down-at-heel pad,
furnished with some shabby red chesterfields and a drab dressing-table.
And, finally, the parched Louisiana wasteland near New Orleans is swapped
for a brick wall and a lamppost. We are ‘anywhere’ and ‘nowhere’. This
Manon does not so much as die in the desert as expire in a deserted street,
dissolving enigmatically into the darkness. 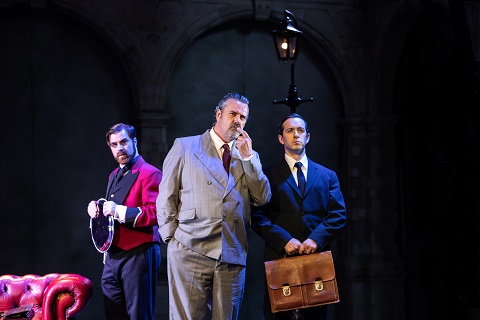 Admittedly, the busy action of Act 1 is well-choreographed (Tim Claydon),
and the stage action and stage music – with the Opera Holland Park Chorus
in strong voice – create a fertile ambience for the first meeting of Des
Grieux and Manon. Stephen Aviss’s Edmondo and Alistair Sutherland’s
bartender make a particularly strong impression. But, surely no one would
be enticed by the ‘luxury’ of Geronte’s apartment; and, no would-be Jean
Shrimpton or Twiggy would be seen dead in the ghastly green and blue get-up
that Manon wears. 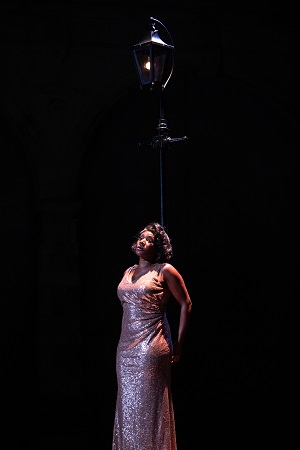 The good news is that there is much fine singing to enjoy. The announcement
pre-curtain that soprano Elizabeth Llewellyn had only recently recovered
from laryngitis was inauspicious, and Llewellyn understandably played it
safe at first. But, when in the latter stages, reassured that her voice
would hold out, she relaxed and released a wonderfully expressive and
dramatic flood of glorious colour, the wait was proven more than
worthwhile. In fact, the slight frailty at the start was not inapt,
capturing as it did some of the innocence of the young Manon (especially as
she is not presented here as a young girl being escorted to a convent), and
the blossoming of Llewellyn’s soprano in the final two Acts communicated
the maturity and growth borne of Manon’s experiences. Llewellyn exploited
the full range of her soprano, including a rich chest voice, encompassing a
vast emotional spectrum and sensitively capturing Manon’s femininity. As
Manon finds herself at the limits of her resilience, so Llewellyn pushed
her soprano to its limits, though never sacrificing her creamily
smooth legato, with compelling power and effect. As her voice recovers
fully, Llewellyn’s performance will be a persuasive reason to see this
production.

Tenor Peter Auty was consistent and strong as Des Grieux. Auty displayed
just one timbre (fittingly Italianate) and employed a single volume (loud),
but he negotiated the rises to the top smoothly, if without subtlety, and
sang with intensity, just about usustaining the vocal passion to the close.
It was a pity that such vocal intensity was not matched by dramatic
credibility: there was no hint of the light-hearted student of the first
scene, nor of the bewitched lover. For there was a strange sense of
disengagement between the two lovers and the love duet didn’t make the
theatrical impact that it should – though that’s perhaps not surprising
when the pair were so often positioned yards apart even as Manon pleads,
“In your arms clasp Manon who loves you! … hold me close to your breast!” 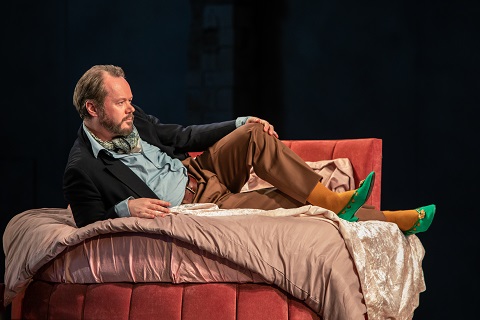 Puccini doesn’t lavish much time and attention on Lescaut, but Paul Carey
Jones made more of this amateur pimp than both score and libretto imply.
His baritone is light and slick – just right for this oleaginous conman.
Stephen Richardson was a similarly unpleasant Geronte, cruel, authoritative
and vocally powerful. Ellie Edmonds’ Singer and John Wood’s Dancing Master
both made a strong impression.

Conductor Peter Robinson drew a disciplined performance from the City of
London Sinfonia; the Act 3 intermezzo was particularly absorbing, the
strings sounding plusher than their numbers should have allowed. Elsewhere,
while there was attention to detail, there was sometimes a lack of
Puccinian sentimentality, but Robinson paced the drama effectively.

Sofulak’s production has one, significant redeeming feature. If Manon’s
arrest at the end of Act 2 passes by practically unnoticed, then her
humiliation in Act 3 is superbly staged. The roll call of prostitutes
become a parade of replica Manons – glittering in identikit gold lame
gowns, expressions frozen in contemptuous indifference. As they form a
circle around Llewellyn now our gaze is fixated on the visual
spectacle on stage, just as the sneering oglers feast on the women
displayed before them. There is delight but also discomfort as, at last,
the raw power and theatrical punch of Puccini’s score makes its mark.