‘A Soldier’s Cemetery’, bridging past and present and future, as imagined
by Sergeant John William Streets, who was killed and missing in action on 1 st July 1916, aged 31.

The lands where the ‘fallen’ rest summon strong emotions: sorrow, shock,
nostalgia, disbelief, anger. From the fields of Flanders where, in the
words of John McCrae, ‘the poppies blow/Between the crosses, row on row’,
to Owen Sheers’ Mametz Wood, where ‘For years afterwards the farmers found
them -/ the wasted young turning up under their plough blades … A chit of
bone, the china plate of a shoulder blade,/ the relic of a finger, the
blown/ and broken bird’s egg of a skull’, the landscapes which are ‘home’
to those who gave their lives in war seem to resonate with the words of the
dead as they try to speak, through the earth, to the living. Having visited
the British War Cemetery at Bayeux, Charles Causley wrote:

I walked where in their talking graves

When history with ten feasts of fire

Had eaten the red air away.

If such places are redolent with elegy and emptiness, rage and nostalgia,
it is almost painful – in these troubling political times, at home and
abroad – to remind ourselves that much of British history is built upon
conflicts waged overseas. But, the gardeners who tend the cemeteries
maintained by the Commonwealth War Graves Commission honour the fallen as a
labour of duty and love, ensuring that the 1.7 million people who died in
the 20th century’s two World Wars are remembered. The Commission
maintains cemeteries and memorials at 23,000 locations in 153 different
countries.

It was an article in the

Daily Telegraph
in May 2017

about three generations of a family who tend the graves at one such
cemetery in Palestine, chanced upon by Robert Hugill, that sowed the seeds
of the composer’s ten-scene opera The Gardeners, which, lasting a
little over an hour, was premiered at Conway Hall earlier this week. It’s
an opera in which The Dead (there are Joycean undertones here) trouble,
console and nurture the living.

Reading Joanna Wyld’s prose libretto – which fluently incorporates selected
phrases adapted from A.E. Housman and Rabindranath Tagore – I was reminded
again of the poets’ voices which urge and enable the departed to carry
their messages from the past to the present:

From McCrae’s Flanders’ fallen, so keen to urge us, ‘We are the Dead. […]
Take up our quarrel with the foe:/ To you from failing hands we throw/ The
torch; be yours to hold it high.’; to Kipling’s ‘The King’s Pilgrimage’ (an
account of King George V’s 1992 Visit to War Cemeteries in France (Kipling
whose only son John was killed in action at the Battle of Loos in 1915,
joined the newly founded Imperial (now Commonwealth) War Graves Commission
in 1917, and was the first Literary Advisor to the Commission); to Sheers’
‘twenty men buried in one long grave’: ‘As if the notes they had sung/ have
only now, with this unearthing, slipped from their absent tongues.’

Wyld’s libretto charts the generational conflicts and conversations,
cyclical returns and resolutions of three men – a grandfather, a father and
a son – whose sense of duty and affinity is diluted as the years pass.
While the Old Gardener is in daily communion with The Dead, The Young
Gardener (his grandson, an Angry Young Man) resents the presence on and in
his soil of an ‘invading’ force. Two female members of this generational
palimpsest seek to urge unity and understanding. Emotional crises are
followed by epiphanies.

Peter Brathwaite’s Old Gardener was a wonderfully compelling figure even
within the concert-staged format; his terrific diction, emotive delivery,
focused tone and nuanced phrasing really shook one from one’s complacency.
As his son, bass-baritone Julian Debreuil had real presence, using his
vocal strength and vivid colour to convey absorbing immediacy. Hugill was
well-served by both of these singers who know how to make something of a
musical phrase. 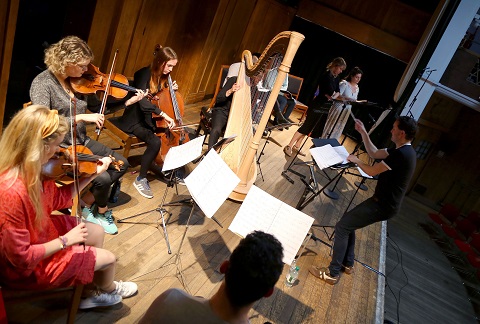 As the Young Gardener, countertenor Magid El-Bushra didn’t initially make
his presence felt; he lacked projection, nuance of phrasing and variety of
colour – though to say that his singing was ‘just’ beautiful is hardly a
criticism! It was not until the collapse of his grandfather, though, that
the Angry Young Man was dramatically and vocally ‘transfigured’; and in
repeating his grandfather’s words at the close, the Young Man’s reverence,
commitment and belief were made entirely credible. Now we had some sense of
character; and, tension and a dynamic relationship with the instrumental
lines: ‘We should take up arms/And fight! Show the oppressors/ Who they’re
dealing with.’

Flora McIntosh’s Grandmother made a strong mark and used her lower range
very emotively and dramatically; her conflict with her grandson was one of
the performance’s most dramatically compelling moments. Similarly, the duet
for the Grandmother and Georgia Mae Bishop’s Mother made one reflect that
perhaps Hugill might have fruitfully included more dramatic ensembles.

The Dead were represented by a male vocal group, singing, with a fitting
balance of unrest and assurance, from a gallery in the Conway Hall. The
instrumental accompaniment – a five-piece ensemble comprising violin,
viola, cello, clarinet and harp – was sensitively played, directed by
William Vann with scrupulous attention to detail and appreciation of the
pace of the musico-dramatic unfolding. Oliver Wass’s harp had a primary
role and he made sure that the motivic repetitions made their mark. But, I
did feel that, even with the small forces at his disposal, Hugill might
have reached for greater timbral variety; in particular, I missed a strong
bass line, as well as diversity of tempo.

That said, Hugill’s music has a moving serenity and stillness; perhaps more
variety of pace and colour would be needed to sustain engagement in the
theatre, but on this occasion the spiritual focus of the music seemed
assured.

I’m not sure that Wyld’s libretto, for all its sensitivity of utterance,
aids vocal diversity and characterisation. Its rhythms dictate a
declamatory arioso. At times when this declamation is foregrounded the
effect is strong; as when, to harp accompaniment, the Old Gardener tries to
explain to the misunderstood Dead – ‘People hear that they wish to hear.
Believe what they wish to believe. This is how it is. Nobody agrees.’
Similarly, when the Old Gardener and his son call upon The Dead to speak to
their troubled young descendant – ‘You burdened our hands that we might
lighten them./ You left us in the dust to create your heaven’ – the harp’s
striking support of their lines makes a strong impact.

There are variations of tone in the text: the exchanges between the
Grandmother and Mother are both more intimate and relaxed, and humorously
prickly. This was not perhaps always evident in the musical setting.

Many times during this performance I was reminded of the five Canticles of
Benjamin Britten. I wonder if Hugill’s The Gardeners is less opera
and more cantata? There are instrumental interludes between the scenes, and
they often provide change of pulse and temperament, but I found it quite
hard to imagine how these might be ‘dramatised’, and there seems to be no
particular need for a change of location or scenery that the interludes
might facilitate. But, it would be interesting to see the work staged to
see what the composer envisages.

Overall, there is a formality, of a ritual and spiritual kind, that this
opera observes consistently and with considerable impact. The Angry Young
Man’s final words are of reassurance and hope – ‘I will tell them,
brothers. They will listen.’