The fact that this production – and its set – is so interior-focused strips
away every notion of grandeur and epic scale in this Boris Godunov
. This can, in all fairness, be liberating. After all, the opera is set
during ‘The Time of Troubles’, a period during the reign of Tsar Boris of
austerity and starvation. One only has to look at the ragged ends of
Boris’s own imperial robe to notice he doesn’t seem immune to the
deprivation that affects those he rules over.

If Jones doesn’t much care about what Russia looks like outside the walls
of the set, he most obviously does care about the psychodrama of Boris Godunov. This is a portrait – and for the much of the opera
portraits are liberally hung to reflect this – into the deeper recesses of
a mind collapsing into madness. The more you watch Jones’s Boris,
the less it owes to Pushkin and more to Shakespearian tragedy. The repeated
throat-slashing of the murdered child heir, Dmitry, (cleverly masked –
kabuki-style – to add authenticity to the usurper’s claims), clearly
alludes to Richard III and his murder of the princes in the Tower. But this
Boris is King Lear with all the same problems and deficits: a
ruler over an unstable kingdom, obsessiveness over an heir, a tragic
relationship with a daughter, a mind descending into hallucination and
insanity. It shouldn’t go unnoticed, either, that Boris and the Holy Fool
provide a similar dramatic function to that of Lear and his Fool – even to
the extent that the nobility or wisdom of the latter, whether in the opera
or the play, is always greater than that of the ruler. 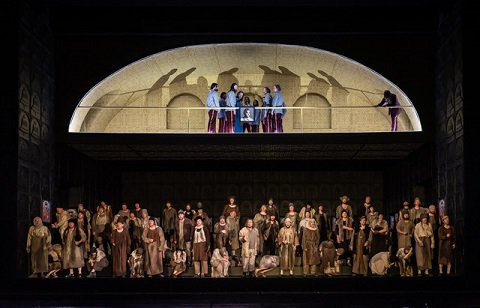 There is probably never any doubt as to Boris’s guilt, or complicity, in
murder in this production. Jones certainly has the most gifted actor-singer
of all in Bryn Terfel whose Boris has the most staggering stage presence.
Terfel’s eyes – and what he does with them is simply unmatched. For any
actor to command a stage with his eyes alone – as Terfel does – is quite
remarkable and it begins here even before the Coronation Scene. The gaze,
the stare, the madness, the sheer darkness was riveting. It’s worth the
price of a ticket alone just to see Terfel look at you – it’s in turn
terrifying, and completely compelling. Pimen’s ‘Chronicle of Russian
History’, which we see as a series of large portraits, clearly paints a
similar picture of Boris. The eyes glower, the face is unbearably ugly in
its tortured expressions – a sharp contrast to the angelic, deified Feodor
beside him. Even in the crowd scene outside the Kremlin Boris is simply
scripted as a ruler who is indifferent, or at best incapable of empathy.
Historically, these might not be entirely accurate depictions of Boris, but
Jones turns him in to someone – as Pimen suggests – as a Tsar worse than
Ivan.

Covent Garden have chosen to use Mussorgsky’s 1869 version (in the Michael
Rot revised edition) which has both advantages and drawbacks. There is
certainly greater fidelity to Pushkin’s text, and ending with Boris’s death
– especially, when in this performance, it was so powerful and so tragic –
seems more satisfactory. But it takes a better production than Richard
Jones’s to stem the impression we are watching a series of tableaux rather
than a single, immutable opera. It is obviously not Jones’s fault that
Mussorgsky writes for such large choral forces – but it is a problem when
those choruses struggle in such a compressed space. Mimi Jordan Sherin’s
lighting – a vast sheet of white light which stretches entirely across the
stage – flattens the height, whilst Miriam Beuther’s black set (even if it
does have a raised upper platform) stifles everything lower down. There is
something Romanov (later, rather than earlier) about Nicky Gillibrand’s
costumes; and the tattered rags of the hungry and dispossessed owe much to
David Lean’s vision of Dickens’s Oliver Twist. 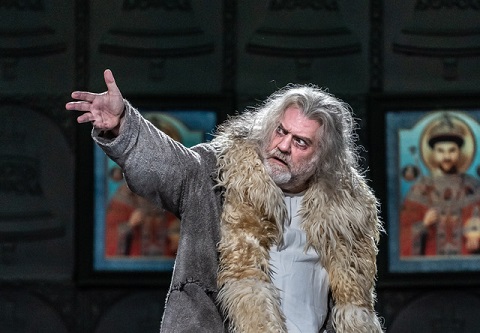 The 1869 version is also much more heavily cast for male soloists, perhaps
less operatic than the 1872 version, more recitative in style and a little
more kuchkist. I think there will always be those who question
whether Terfel has the power – or depth of sound – to sing the role of
Boris. One will always probably prefer the authenticity of a Russian bass
in this part, but what Terfel does bring to Boris is such insight and
tragedy to him. The acting is such an extension of what he does with his
voice you wonder what comes first. He is that very rare thing, the complete
singer-actor. It is certainly the case that he felt underpowered when he
sang beside Matthew Rose’s superlative Pimen in the final scene; on the
other hand, any one who heard Terfel’s simply stunning death scene will not
forget it for a very long time. Where he probably has an advantage over a
bass here is that the voice can do so much more at a higher register
without straining and his ability to scale down the voice was
heart-rending. 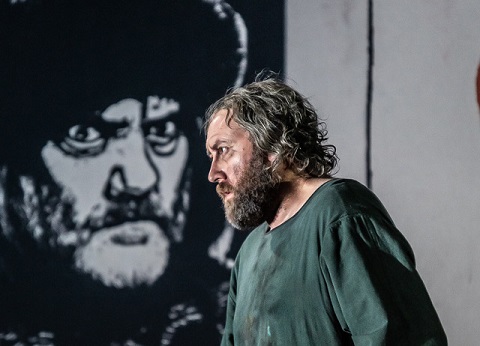 Terfel does madness very well. One is reminded in a Terfel performance of a
conductor like Karajan in Berg – everything is geared towards total
physical and mental exhaustion. Matthew Rose’s Pimen was no less
commanding, though less intense in characterisation. The vocal lines are
long and steady, his bass rich and deep – in a sense a deeply ‘monkish’
performance, perhaps the closest and most authentically Russian sung from
this largely British cast. John Tomlinson, reprising the role of Varlaam,
was hugely impressive, giving a most virile and spirited performance of the
drunken monk. David Butt Philip’s Grigory was a little understated as the
back-pack, knife-wielding usurper for my taste. The smaller roles – one of
the notable features of Boris Godunov is that it is dominated by
so few singers – were all finely sung, notably Roger Honeywell’s Prince
Shuisky and, a particular standout, Sam Furness’s tin-headed Holy Fool.

The chorus of the Royal Opera House had a rather busy night, though one
might argue Ben Wright, the movement director, had his work cut out by the
lack of space they had to move in. The singing was first rate, as was the
playing of the orchestra under the rather swift baton of Marc Albrecht.
This was a performance which ran for a more than comfortable two hours.

There is, I think, a good reason why Boris Godunov remains
difficult to stage well: it’s just written that way. Richard Jones doesn’t
really succeed in doing so, though if we want a study in the madness of
Tsar Boris, he has designed one for Bryn Terfel that succeeds on almost
every level. Terfel carries this production by his sheer presence alone. I
think the question is, would this production remotely work with any other
singer in the role? I suspect the answer is a resounding no.