When it premiered at the Houston Grand Opera in 1987, just a decade and a
half after the epochal events it portrays, Nixon in China received
accolades. Since then, it has secured a modest spot in opera world, with
two or three productions a year worldwide – but this understates its
musical significance. Over the past three decades, other composers have
adopted many of Adams’ innovative techniques, such as basing plots on
current events, using romantic harmonies and melodies, quoting popular
music, including surrealistic political satire, and amplifying singers.

Poet Alice Goodman did not write the libretto around a conventional plot.
Instead, she recounts the ceremonial highlights of President Nixon’s
famous visit – his arrival at Beijing Airport, meetings with the
Chinese leaders, Pat Nixon’s experiences among the people, a state
banquet, and a revolutionary ballet – as a basis for a surreal
reflection on the tension between public duty and private life. 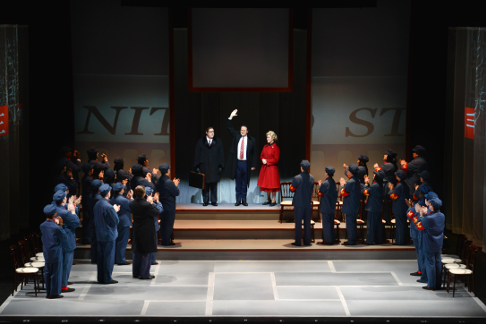 The Nixons and ensemble

The libretto’s strength lies in a series of introspective monologues
in which each character recounts important memories that shape their
attitude toward politics. Goodman’s underlying point seems to be that
most politicians are childishly self-important. So Madame Mao is a
revolutionary fanatic who treats the creation of a perfect society as an
aesthetic project. Kissinger is a doddering old fool who responds to Chou
En-Lai’s desire for dialogue by asking to go to the toilet. President
Nixon is an American provincial who obsesses on World War II. Mao is a
cryptic old man muttering platitudes about his boyhood revolutionary
achievements. All have lost touch with everyday virtues of family,
community and humanity.

The remaining two characters offer a more sympathetic and humanistic
alternative. Chou En-Lai’s elegance and sense of the historical
moment fuel two memorable arias, one each at the end of the first and third
acts. Pat Nixon expresses stereotypical virtues of “home and
hearth” through her simple love of children, animals, community and
other simple things.

Adams sets this libretto with a distinctive style of orchestral writing.
Drawing on the minimalist tradition of Philip Glass and others, the score
of Nixon in China rests on hypnotically oscillating block chords
and arpeggios punctuated by syncopated notes. The challenge for minimalist
music is that it lacks a clear architectural principle that allows music to
develop harmonically and melodically over longer timespans. Climaxes are
achieved almost entirely by increasing volume or speed. Minimalist music
shimmers and even changes, but it does not evolve – in contrast to
the music of Schubert, Wagner, Bruckner and other traditional composers who
sometimes employed repetitive forms. 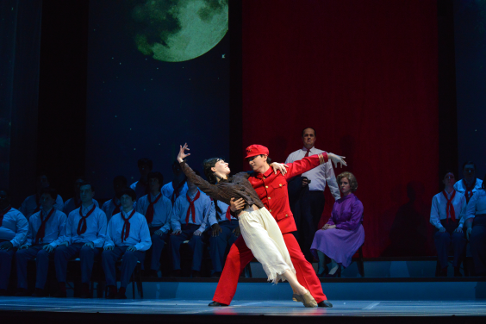 For Adams, the overall result is atmospheric but static music, more akin to
a film score than a classic opera. In most scenes of Nixon in China, that mood is one of slightly mysterious
introspection, as if one is seeking to remember something distant and
ineffable – a suitable style for moments when characters reminisce.
The result can be quite beautiful, as in Pat Nixon’s scena
“This is Prophetic,” with its hypnotically undulating
alternating between E major and E minor. It can also be exciting for short
periods, as in Madame Mao’s robotic revolutionary rhetoric. Yet it
rarely sweeps the listener up.

In contrast to previous minimalists, Adams seeks to offset the orchestral
stasis by introducing traditional melody in the vocal parts – which
he does by adopting a surprising number of traditional bel canto
conventions. Act I ends with an ensemble, Act II with a coloratura
showpiece, and Act III with a reverie – and the opera even contains a
ballet, albeit a surrealistic one reminiscent of a 1950s movie dream
sequence. Each major character receives at least one big scena.
President Nixon’s opening aria (“News”) follows the
fragmented style of the orchestra, but in the second and third acts, the
vocal lines become longer and more romantic – and are then often
picked up by the orchestra in a manner intermittently reminiscent of Wagner
or Puccini. Later in the opera, pop rhythms and ballet music appear.

This distinctive structure means that a successful performance of Nixon in China requires great singing actors. The justly
celebrated premiere production, directed by Peter Sellars and featuring
Boston-area stalwarts Janes Maddalena as President Nixon and Sanford Sylvan
as Premier Chou En-lai, was exemplary. It also included a superb portrayal
of Pat Nixon by the extraordinarily versatile crossover artist Carolann
Page – who teaches today at Westminster College, less than a mile
from where Princeton Festival performs. 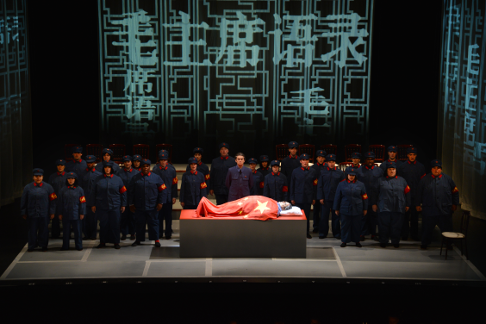 The Princeton cast was comprised of younger American singers with a solid
track record in regional houses and on the competition circuit. Almost all
excelled in what was the first time performing this difficult score.
Baritone Sean Anderson, who has performed here several times before,
blustered self-importantly as Nixon. Lighter baritone John Viscardi
remained dignified and smooth in the lighter role of Chou En-lai.
Coloratura Soprano Rainelle Krause reined in a few blaring high notes to
offer a subtly characterized renditions of Pat Nixon’s big monologue.
Soprano Teresa Castillo brought down the house with Madame Mao’s big
rant, even if she lacks some of the icy precision and focus the score
suggests. Tenor Cameron Schutza deployed a ringing Heldentenor to portray
Chairman Mao. Baritone Joseph Barron was gruffly sonorous as Henry
Kissinger. Each singer was precise and passionate and acted well.

A great performance of this difficult opera, however, requires more.
Maximum impact requires singers able to deliver lines with the subtlety,
exceptionally clear diction and clear and beautiful tone of a Lieder singer
– something made easier by the use of microphones authorized by the
composer. In general, the Princeton performance was more conventionally
“operatic” that it might have been, and not all singers
consistently attended to stylistic nuances.

One example must suffice. Unlike many modern composers, Adams writes with
exceptional attention to poetic cadence. The note values in his vocal lines
subtly mirror different patterns of long and short syllables. In
particular, the ends of many lines are syncopated (most often
LONG-short-LONG, or LONG-short-short). (An example is President
Nixon’s first sung line: “News has a kind of MY-ster-Y”.)
This distinctive three-syllable rhythmic snap drives the music forward
– much as does the rap cadence in a more recent work like Hamilton.

Such details intermittently went missing, as one might expect in a short
run. Achieving such stylistic unity requires, in addition to precise
coaching, a conductor who keeps the orchestra moving swiftly and is willing
to hold down the volume and weight of the instrumental playing. Festival
Director Richard Tang Yuk directed with his customary care and precision,
and the orchestra and chorus delivered a polished performance of this
difficult work – even if cautious tempos, a thick sound, and
intermittent lack of rhythmic nuance tended, in the end, to drag the
performance down somewhat. The staging showed that much how much innovative
lighting and color can achieve at a relatively low cost. The opening and
closing scene, in which Chou stands before the casket of Mao, was
particularly effective. The ballet dancers were engaging.

Overall, this production reinforces the Princeton Festival’s
reputation as a site for innovative and sophisticated summer opera.

Photos courtesy of The Princeton Festival