2010 revival
), Devieilhe swaps narcotic rebellion for a Napoleonic-era regiment, and
drug-induced oblivion for a nurturing battalion of ‘Daddies’. But, despite
the generic, stylistic and dramatic side-step, Devieilhe brings vocal
‘bellazza’ to this account of Donizetti’s/Pelly’s dungarees-and-boots
Marie, the ‘foundling’ adopted by the troops who take the tantrum-prone
teenager to their hearts.

At this second performance in the revival run, Devieihle seemed to start a
little cautiously: vocally, at least – Marie hoisted laundry baskets,
hauled washing lines of long-johns, and brandished hot irons with vim and
vigour. 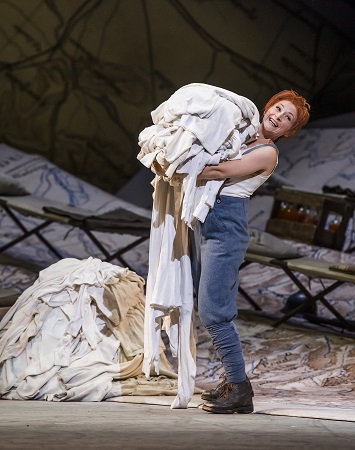 But, who could complain if there was a delicacy in the voice to
counter the stamp of the Doc Martens, for this Marie dazzled with the
elegance of her coloratura, the exquisite grace of her pianissimo,
especially at the top, and the charm of her sometimes slender but utterly
fluent vocalism. No wonder the regimental forces eschewed wild warmongering
for worshipful devotion. Indeed, this Marie’s vocal sensitivity, and its
intimations of frailty beneath the fist-punching, could only add to the
charm. Both ‘Il faut partir’ and Act 2’s ‘Par le rang pet l’opulence’
melted the heart, even while the regimental song rollicked rumbustiously.
That she could switch in a vocal blink between the two added to the dazzle. 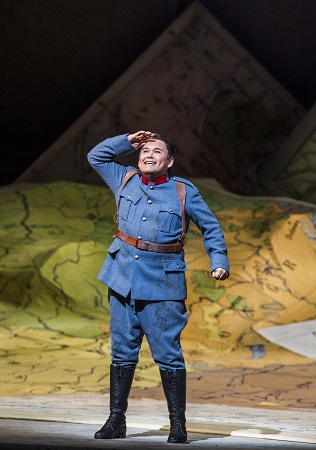 That said, Devieilhe’s soprano is rather ‘slight’ for this house, and
perhaps for this role. The same could certainly not be said for Mexican
tenor Javier Camarena whose Tonio was a Tyrolean thunderbolt. Camarena has
made the nine top Cs of ‘Ah! mes amis’ his international calling card, and
he clearly delights in reprising it: as the audience must have known when
they clamoured for more after he’d crested – surely and suavely, his facial
muscles relaxed, his torso strength firm, the tone true if a little nasal –
the yodeller’s peaks. Camarena duly obliged by repeating the party trick –
though one might feel that, however stunning the vocal acrobatics, the aria
itself doesn’t merit too many second hearings. But, I’m being rather
unfair, for Camarena was actually at his most impressive in the more tender
episodes, such as Tonio’s Act 2 declaration of love ‘Pour me rapprocher de
Marie’, in which his relaxed lyricism came into its own. And, dramatically
he grew into the role too: initially a sort of Tyrolean Albert Herring in
white knee-high socks and sleeveless jersey, by the close he’d found his
theatrical feet and manned the tank which gate-crashed the party in the
Marquise de Berkenfield’s panelled reception room with aplomb. 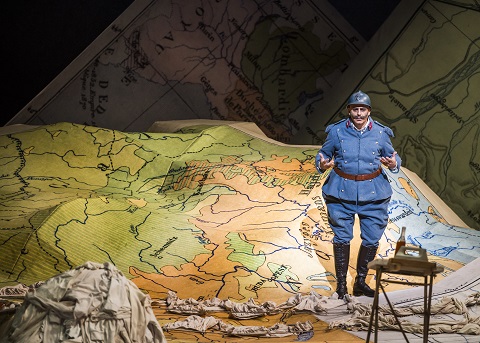 I didn’t sense much ‘chemistry’ been this Marie and Tonio, though, for all
Camarena’s boyish grinning charm and Devieilhe’s charismatic grace. But, no
matter, Pietro Spagnoli’s Sulcipe more than made up for the absence of
romantic frisson between the young ones, with a winning dose of paternal
warmth and, as he sought to ‘soften up’ Enkelejda Shkoza’s Marquise, some
open-hearted amorousness.

Shkoza was superb as the guilty but essentially good-natured Marquise; not
least in the spoken text, where she put Miranda Richardson’s rather
tight-laced and taut-tongued Duchesse de Crakentorp in the shade. Donald
Maxwell, reprising his Hortensius, made for a delightfully dippy
major-domo. 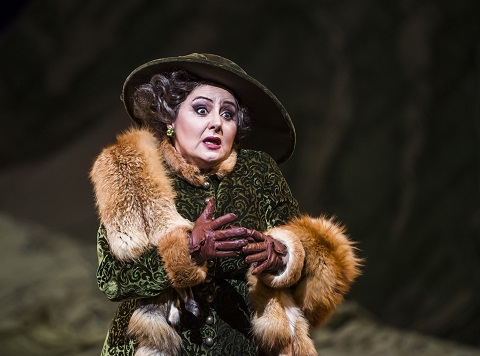 The overture, in the hands of conductor Evelino PidÚ, seemed rather leaden
– just a few minutes in, I found my mind meandering – and the tempi laboured
a little in Act 1. There was a lack of breeziness and brightness that
seemed to infect the Stalls audience too, who only woke up when Camarena
top-C’d (though friends seated in the Balcony reported otherwise of their
fellow listeners, and noted chuckles, chortles and standing ovations all
round). But, after the interval the cast seemed to grab the show by the
scruff of its neck, and we had theatrical and musical ‘lift off’. The male
chorus were superb, too, relishing the chance to act and interact.

The military map-mountains of Chantal Thomas’s Act 1 set still reach for
their peaks as surely as Tonio’s vocal excursions, but, as the French
cockerel descended during the final rousing chorus, ‘Salut a la France!’, I
couldn’t help feeling a little forlorn when reflecting that in 2010 – or
indeed 2012, when Ann Widdecombe felt sufficiently Euro-friendly to embody
the Grande Duchesse – we could not have imagined that the ‘map’ of Europe
might be threatened with a re-write again, so radically, and so soon.

It was better to push such cares aside and console oneself during the
rapturous reception that the ROH audience gave cast and musicians, that
just as the Daddies had taken Marie to their hearts, so Covent Garden
seemed to have taken Sabine Devieihle and Javier Camarena to theirs.