Stage director Ivo van Hove worked on a wide open, bare sound stage. This was not opera. It was no-where. That was exactly the point, and that is where Fatty, Moses and the widow Begbick built their city Mahagonny to satisfy their greed and our lust.
All this greed and lust were in-your-face — this the orchestra insisted. The maestro gave a loud, very loud, clinical and chiselled reading of the Kurt Weill score from the get-go, making it very clear that it is highly sophisticated, brilliant music, and that it is confrontational.
Mr. van Hove’s staging was confrontational, On the bare stage was a projection screen serving as the glass plate of a microscope under which we would study the faces and the souls of the hordes of men who came to Mahagonny to forget their dreary lives and to indulge their vices and their pleasures. Then came the whores from Alabama and four lumberjacks from Alaska, a bit lost in the visual cacophony of the teeming world.
It was a chaotic stage, but the videographer singled out the faces of our a few of the arrivals while Kurt Weill singled out their voices — Jenny the whore, Jim Mahoney the sensitive, soul searching lumberjack who goes a bit crazy, and his three buddies, Jack the glutton, Joe the boxer and Bill the miser. If their voices were at first nearly lost in the melee, that’s because they were in fact in a melee.
Little by little their projected faces bared their souls to us as their voices grew stronger. The maestro did not indulge the easy rhythms of the Kurt Weill’s jazz, rag time and folk influences. It was musically obvious there was a lot of tough stuff to come.
Jim, the lumberjack, got a bit maudlin and then he got bored. There came a hurricane (three giant fans and a wounded citizen suffering melodramatically on the screen), and Jim had his revelation, and the hordes (well, the thirty men of the Pygmalion Chorus and fifteen supernumeraries) shouted it in our faces. Black out. 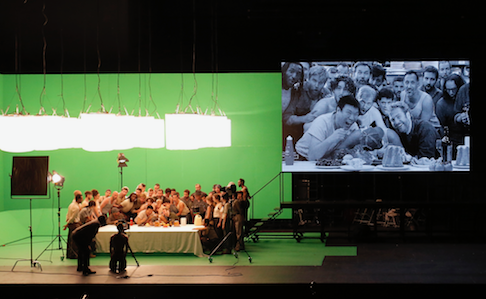 The stage and the screen. Peixin Chen as Joe, Sean Panikkar as Jack (head down), Thomas Oliemans as Bill at the all-you-can-eat table, with the Pygmalion Chorus
The lid was off — total liberty to totally satisfy any of your cravings, and to get whatever you want. If you can pay for it. A stage was needed to play out the demises of Jack the glutton and Joe the boxer, so one was constructed stage right. There was simulated humping against its back wall, and at the same time we saw very graphic humping projected on the screen, the whore ’s face directly in our face.
Austrian tenor Nikolai Schukoff was Jim Mahoney, the ring leader of it all. Mr. Schukoff is a very charismatic performer, easily projecting a sexuality to be satisfied, but willing to show a softer side and maybe yearn for a better, truer life. Tenor Schukoff is a big performer and easily found the force needed to bust things wide open in Mahagonny (Mr. Schukoff is both a Don Jose and a Siegmund on major stages).
The Rise and Fall of the City of Mahagonny is the epitome of didactic, Epic Theater. These days social commentary wears thin on the opera (or any) stage. As the citizens of Mahagonny were wearying of its corruption we too were wearying. Bertold Brecht maybe was as well, so he added a bit of witty, heavy irony— the Mahagonny inhabitants dream of a new, better city, BÈnarËs, better known these days as Varanasi, the Hindu city of death. Director van Hove obliged by projecting onto the screen hazy, smokey images of this city of ritualistic cremation as seen from the Ganges. 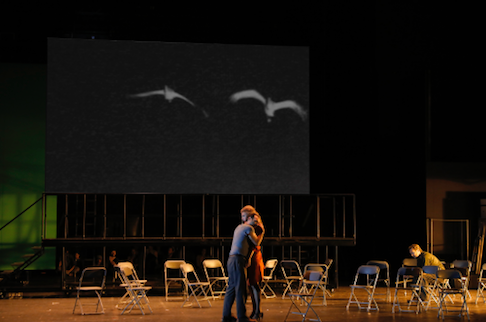 Nikolai Schukoff as Jim, Anette Dasch as Jenny in the final duet. Jim’s friend Bill (Thomas Oliemans) is at the far right.
In the penultimate scene van Hove brought, finally, our total focus and our held back sympathy onto Jim Mahoney when Jim delays his death as long as he can in a long, moving and hopeless monologue, and then makes his farewell to Jenny in a beautiful, tender duet. Here there were no screen projections, there was no microscope. Here was, finally, real human emotion to for us to feel, not to judge.
The fall of the city of Mahagonny was of the scenic magnitude to equal the gigantic musical efforts emanating from the pit. There was smoke and fire, there was thunder and lightning, more smoke and fire raged from the pit. It was the destruction of Valhalla you have always wanted to see but never got. You have had to settle for Wagner’s pale by comparison account of such cataclysmic destruction.
It was no-holds-barred casting: Karita Mattila as the widow Begbick, Sir Willard White as Moses, Alan Oke as Fatty. The Jenny was German soprano Annette Dasch (a Donna Elvira on major stages) though in this staging Jenny was not given a dominant presence, nor did the staging on the wide open stage provide an acoustic shell to project her voice. The three lumberjacks were of consummate charm and fine voice: Sean Panikkar as Jack, Thomas Allemans as Bill, and Peixin Chen as Joe.
The six prostitutes were gutsy and lusty, very willing to play their parts: Kristina Bitenc, Cathy-Di Zhang, Thembinkosi Magagula, Maria Novella Malfatti, Leonie Van Rheden and Veerle Sanders.
I saw the second of four performances on July 9, 2019.
Michael Milenski