Canadian composer Zosha Di Castri’s new piece had been commissioned to
commemorate the 50th anniversary of the first Moon landing almost to the
day (on 20 July 1969). The work used a large symphony orchestra (including
triple woodwind, five horns, four trumpets, tuba and three percussion),
plus the BBC Singers, and Di Castri interwove three diverse texts, extracts
from Giacomo Leopardi’s 1820 Italian poem Alla luna, fragments of
the Ancient Greek poet Sappho (in English) and a recent text by
Chinese-British writer Xiaolu Guo which references the 1969 Moon landing,
the legend of the Chinese goddess of the Moon and the recent Chinese
exploration of the far side of the Moon, resulting in a complex
multi-layered work which perhaps tried a little too hard to fit too much
into its 15 minute duration. Di Castri certainly created a series of
striking textures, from the shimmering, glittering over deep bass notes of
the opening to busier more vivid moments, she has strong ear for
imaginative timbres. Perhaps if the BBC Singers’ diction had been somewhat
clearer, maybe the work needs a rather larger choir than this, but there
were too many moments when the choir contribution was a somewhat distant
eerie evocation. On first hearing, the piece did not always read
structurally, though Canellakis drew superb performances from her
performers.

The programme was very much an evening of ‘novelties’, with Zosha Di
Castri’s world premiere being followed by the first Proms performance of
Dvo?·k’s tone poem The Golden Spinning Wheel, and Jan·?ek’s mass
which is one of the 30 works being celebrated in this year’s Proms as being
‘novelties’ introduced to the UK by Sir Henry Wood, founder of the Proms.

The Golden Spinning Wheel
is one of a group of tone poems which Dvo?·k wrote in 1896 on his return to
his native Bohemia after his period in New York as director of the National
Conservatory. It is a long piece, around 30 minutes, which narrates quite
closely the folk tale as told in the ballad by 19th century Bohemian poet
Karel JaromÌr Erben. Dvo?·k’s orchestral writing successfully evokes the
world the folk tale with the hunting, horse-riding prince, the seductively
spinning young woman and the evil step-mother (cue some striking orchestral
writing), but by keeping so closely to the narrative detail rather than
more generally evoking the themes, Dvo?·k left himself little time for
development and the result at times seemed a series of short breathed
episodes. Canellakis drew fine playing from the orchestra, lovingly
creating Dvo?·k’s colourful and beautiful writing. 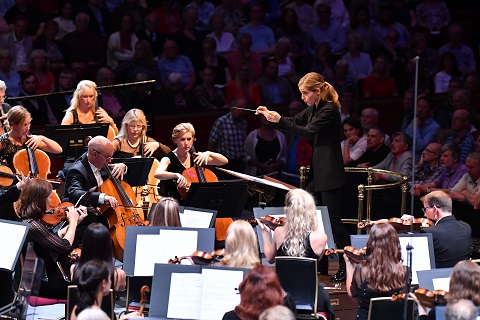 Jan·?ek’s Glagolitic Mass was premiered in 1928, but has a
somewhat complex textual history with Jan·?ek having to hastily revise
(simplify) the work just prior to the premiere. Canellakis opted for the
final published version from 1930, but previous BBC Proms outing of the
work have explored the re-constructions of Jan·?ek’s more complex first
thoughts. However, in all its forms the work remains an immense challenge
with Jan·?ek’s vocal and instrumental writing taking no prisoners. It is
noticeable that in the last 30 years, Western European choirs and
orchestras have become more accustomed to Jan·?ek’s style and the writing
in the Glagolitic Mass no longer feels quite on the edge of the
possible. In fact, one of the features of this BBC Proms performance under
Karina Canellakis’ direction was how beautifully the work was shaped and
performed. Some of the most notorious choral passages were not simply
negotiated by the BBC Symphony Chorus, but sung musically and expressively.
And the same goes for the soloists, particularly Ladislav Elgr who sang the
taxing high tenor part in a way which made it seem the most natural
outpouring of religious expression.

Canellakis seemed to take quite a symphonic view of the work, this was
beautifully shaped and highly expressive. The radiant sound of the choir
and orchestra in the ‘Gospodi pomliluj’ (Lord have mercy) was magical, and
throughout she created beauty out of Jan·?ek’s cragginess. Thanks to the
finely technical expertise of the performers, this was a highly
sophisticated experience. Perhaps I slightly missed the sheer perverse
rawness of some performances, the sense of communal struggle. Jan·?ek’s
image of an immense natural cathedral seemed to have been if not tamed
perhaps somewhat tidied. More importantly, I did not always feel the
intensity of the meaning of the work, whilst Jan·?ek was not necessarily a
conventional believer nor is the mass a straightforward liturgical work,
but it is certainly about belief and about God. This did not always come
across, and for all the many choral beauties it did not feel as if the
chorus meant every note and word, and it should.

The soloists are variously challenged in the piece. Asmik Grigorian sang
with plangent beauty, making Jan·?ek’s lines radiant without ever quite
convincing that the text meant very much to her. Jennifer Johnston, in the
short mezzo-soprano part, was wonderfully expressive and trenchant, and I
have only the greatest admiration for tenor Ladislav Elgr. Jan MartinÌk,
stepping in as bass soloist at the last minute, sang the bass part almost
from memory and made every note seem as if he really meant it. Organist
Peter Holder was simply dazzling, in Jan·?ek’s outrageous solo moments for
organ, making the Royal Albert Hall organ move with great dexterity.