Written in 1909, the intermezzo’s neoclassical wit may be attuned to its
time, but Wilkie updates the action to the 1940s and places it in a swish
panelled apartment (sensibly pushing the action to the front of the long
OHP stage) furnished with a gramophone, chaise-longue and cocktail cabinet
that attest to its owner’s moneyed leisure.

The plot, like the secret, is simple. Newly married Susanna is afraid to
confess to her non-smoking, older husband that she has a nicotine habit and
so resorts to various wiles to keep her secret vice hidden. Smelling
tobacco, Count Gil assumes that there is no smoke without fire and accuses
her of infidelity. When he uncovers her subterfuge, they share a cigarette.
Not very PC these days, when smoking seems to be more shameful than marital
betrayal, but a perfectly droll amusette. 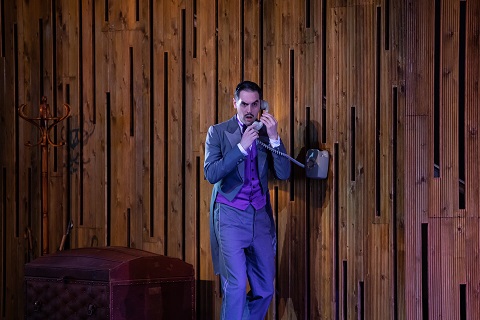 Clare Presland’s Susanna is lyrical and light, but she works hard to
project and finds a richer luxuriousness for the languorous aria, ‘O Gioia
la Nube Leggera’, which sees her satisfy her Craven A craving and eulogise
the nirvana of nicotine. Enrico Golisciani surely squandered his talents on
libretto-writing, when the advertising industry, or Mills & Boon, might
have reaped the rewards of his ripe repartee: “Oh, what a joy to follow
with half-closed eyes, the fine cloud that rises in blue spirals, rises
more delicately than a veil and seems like a golden illusion vanishing into
the clear sky. The fine smoke caresses me, rocks me, makes me dream. I wish
to taste your delight with a slow sweetness.” 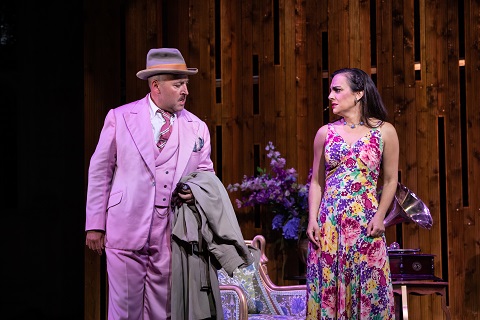 Even though attired in a candyfloss-pink suit, Richard Burkhard sang with
subtlety as Count Gil – no mean feat – moving swiftly through the
speech-like passages and slipping suavely into more sumptuous mode for
Gil’s extravagant paranoid outpourings.

If the opera requires two superb singing actors, then it also needs a
conductor who can discern both the wit and the delicacy in the busy score
and bring them deftly to the fore, which John Andrews did most tidily and
stylishly at the helm of the City of London Sinfonia.

So, what to pair with the gossamer delights of Wolf-Ferrari’s trifle?
Perhaps Ravel’s L’heure espagnole? Or, if one wants a more sombre
counterpart, Poulenc’s tragic La voix humaine? Opera Holland Park
plump for Tchaikovsky’s lyrical fairy-tale Iolanta, an altogether
more dramatically, psychologically and musically ‘consequential’ work, and
one which is far from ‘saccharine’.

Born blind, the princess Iolanta is kept ignorant of her disability by her
father, King RenÈ, who confines her to the family’s estate and forbids all
who come into contact with her to mention light or beauty in her presence.
A sign above the gate to the garden threatens unwelcomed trespassers with
death. When Iolanta’s betrothed, Robert Duke of Burgundy (who is unaware of
her blindness and enamoured of another, Countess Mathilde of Lorrain)
accidentally enters the King’s domain, with his friend Count VaudÈmont, the
latter is enchanted by the sleeping Iolanta. It’s a long journey from
darkness to light but eventually, by dint of VaudÈmont’s fortitude, the
doctor Ibn-Hakia’s wisdom and the King’s forgiveness, Iolante’s gains the
gifts of sight and light and love.

For an opera that closes with a choral rejoicing for God-given light,
Olivia Fuchs’s production is an oddly dull and dismal visual affair:
geometric slants replace garden scents and dangling lightbulb ropes
substitute for rose trellises. Eschewing naturalism and the original
locale, Fuchs and takis set the action in a 1940s hospital: Iolanta isn’t
quite chained to the bed, but she might as well be … various drugs are
administered to rend her unaware of her misfortunes and senseless of
reality. Her nurse, Marta, robustly and warmly sung by Laura Woods, is a
dour matronly figure straight out of Jane Eyre’s boarding school. The
female chorus use bandages to cover their own eyes and gag their own
voices. It’s grey and grim. 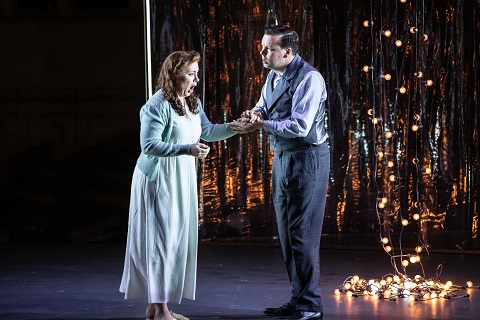 Fortunately, it’s Tchaikovsky’s emotionally charged Romanticism that calls
the shots and drives the drama. More fortunately still, OHP has found a
central pair of romantic leads made in heaven. Who needs Netrebko and
Kaufmann, or Gheorgiu and Alagna, when we can have Natalya Romaniw
(Iolanta) and David Butt Philip (Count VaudÈmont), a veritable Romantic
dream-team? They may have been attired in white shapeless nightdress and
grey stuffy suit respectively, but their glorious singing was overflowing
with the fresh, vivacious and sharply defined palette of the Baroque artists so
beloved by the Pre-Raphaelites. The vocal brushstrokes were smooth,
sustained and sumptuous. Both paced their characterisation and development
effectively: their climactic duet was almost overwhelmingly impassioned and
beautiful. 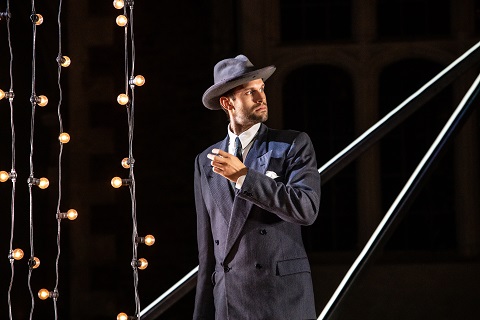 Iolanta
is a long ‘one-acter’ though. At times the flimsy plot can sag under the
opera’s musical weight, and the City of London Sinfonia, conducted by Sian
Edwards, weren’t consistently up to its demands. Iolanta was
surely a mis-matched pairing with Wolf-Ferrari’s breezy froth: both offered
much to admire but they pulled in different directions. Thankfully, the
partnerships at the heart of each were absolutely singing from the same
hymn-sheet and all that one required to confirm one’s faith, without a
doubt, in Opera Holland Park’s vision and values.