This handsome physical production by set designer Robert Little was a worthy revival from the 2011 season. While Mr. Little may break no real new visual ground, he does splendidly fill the stage with three beautifully dressed and imposing settings that effectively satisfy all our sentimental, dreamy images of an idealized bygone Paris. If I had one wish, I would have loved for the transition from Act I to Act II to have been shorter. That said, when the curtain rose on Act II’s overwhelming, over populated Monmartre street scene, the revelation was greeted with appreciative applause that reveled in the scenic accomplishment.

Sarah Riffle lit the proceedings with an admirably calculated design that found great nuance between indoor and outdoor settings as well as varying times of day. From the warmth and joyous colorings in the palette for the first two upbeat acts, Ms. Riffle transitioned most effectively to cooler tones when the lovers’ troubles have set in. Her eventual moody illumination as tragedy visits the garret had meaningful impact. 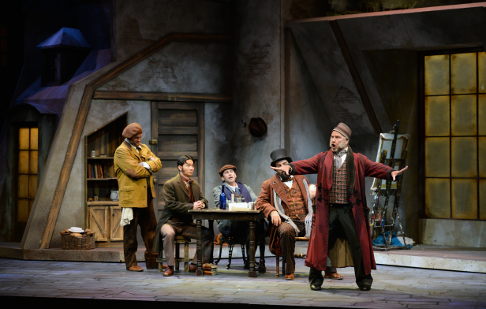 In the best sense of the word, this was a decidedly traditional approach, some might even say “old fashioned.” I am always reminded that when a critic sniffed that “Annie, Get Your Gun” was old-fashioned, composer Irving Berlin retorted: “Yeah, an old-fashioned smash!” And so it is here.

“Team BohËme” has trusted the surefire material and eternal appeal of the melodious score and did everything possible to frame it beautifully and stage it with exuberant freshness. Director Octavio Cardenas has brought an abundance of imaginative stage business to bear, all the while he skillfully accommodates the time honored performance traditions of the signature moments.

The interaction between the men’s quartet was especially detailed and filled with resourceful playfulness. The lovers’ flirtations, first between Rodolfo and Mimi, and then Musetta and Marcello, were sexily inevitable. The character relationships had specificity, movement was well motivated, and the crowd scenes were tightly controlled as the groupings fluidly morphed to accommodate the script’s demands. Both Lisa Hasson’s Apprentice chorus and Barbara Sletto’s Children’s Chorus did themselves proud. 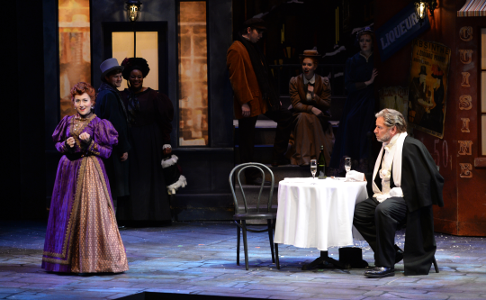 Conductor Michael Christie led an assured, stylistically sound, and dramatically pliable reading, inspiring the exceptional DMMO orchestra to respond with an ensemble effort that ranged in effects from luxuriant, to lush, to comtemplative, to crackling. Maestro Christie excelled at accommodating his singers, partnering them with great finesse. And what a set of soloists they were!

Tenor Joshua Guerrero’s opulent spinto instrument was all you could wish for, as he conquered the role of Rodolfo. Mr. Guerrero had an impetuous, boyish appeal that illuminated the opening acts, as he sang with fresh-voiced abandon and pranced about with ebullient youthfulness. By Act III, the performer ably weighted his delivery with appropriate pathos and despair. His straightforward Italianate style was tremendously appealing, even down to the occasional sobbing catch in a phrase or three.

He was beautifully paired with his Mimi, the radiant soprano Julie Adams. Her rich, luminous tone, plangent delivery, total command in all ranges, and ability to effortlessly ride the most impassioned orchestral passages were thrilling to hear. Ms. Adams is a sincere and unaffected actress, and the heartrending tale of love lost was communicated with unerring commitment and lustrous singing.

Thomas Glass proved an exceptional Marcello, his buzzy, beefy baritone ringing out with character and conviction. His bromance chemistry with Rodolfo yielded many engaging moments and their synergy in the Act III trio, and especially in their party piece duet that begins Act IV was musically ravishing and dramatically touching.

ManÈ Galoyan discovered her own spunky take on Musetta, one that was longer on sensuality than it was on sass. This not only paid good dividends in Act II’s tease of Marcello, but also laid the groundwork for the more serious side she demonstrates by opera’s end. Ms. Galoyan is a highly proficient soprano, attractive and secure, and she knows just how to utilize it to maximum effect. I am not sure I have ever heard the penultimate note of Quando m’en vo held to such maximum length and effect. 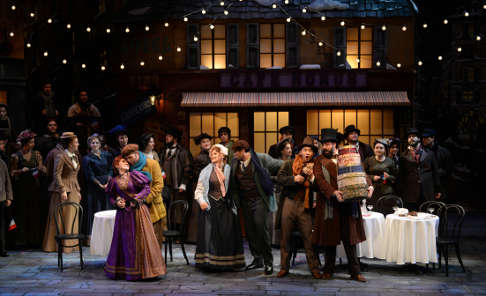 Bewhiskered, brawny Timothy J. Bruno made for an endearing Colline, his orotund bass rolling out with ease and obvious enjoyment. When it came time for him to tug our hearts, Mr. Bruno did not disappoint and obliged with a moving Coat Aria. Tall, slender and nimble, baritone Brian Vu found more in Schaunard’s arsenal than we often encounter. His sizable, incisive baritone contributed a gleaming presence, and his easy stage presence had enormous appeal.

It is a joy to encounter a production that is peopled by actors that actually look like young, struggling artists. I have encountered many stagings in which some, even all of the main quartet of men sported waistline numbers that exceeded even their considerable ages. Kudos to DMMO for so carefully casting such accomplished young stars that also were able to bring the familiar tale to such believable fruition.

Rounding out the cast, bass Matthew Lau found admirable variety in doubling the roles of Benoit and Alcindoro. His solidly sung portrayals found playfulness and camaraderie as the former, and long-suffering frustration as the latter.

By the time this laudable assemblage of talent brought us to the end of their journey, with Rodolfo screaming his anguish at Mimi’s deathbed, the other bohemians grieving each in their own way, the radiant orchestra melting into the tragic final chords, if you didn’t have a lump in your throat and a tear in your eye, well, you were at the wrong address.