Director Michael Shell had enough brilliant ideas for three productions, which at several gilded lily moments may have been one production too many. However, his task was not an easy one. Since I have addressed this before, I am going to quote myself:

Candide began life as a notorious 1956 Broadway flop, most notable for a Columbia cast recording, which showcased Bernstein’s eclectic score. After the show languished for some years, Harold Prince devised a 1 hour and 45-minute version with a new libretto by Hugh Wheeler, which was such a success at Brooklyn Academy of Music in 1973 that it moved Broadway for a hit two-year run in 1974. It was this lean and mean, interactive production that won me over, and I saw it four times. At last this meritorious score was married to a sassy, witty book and its previous problematic lack of Voltairean elan and coherent focus were fixed! Mais, attendez-vous. . .

Now that it was a hit, opera houses expressed interest in a proscenium version in two acts. Prince (and others, including Bernstein) agreed to continue to tinker with it and began adding back in characters and songs that were extraneous. The temptation seems to have been great to re-order and darken the plot, resurrect good numbers that are nevertheless unnecessary, and worst, give enjoyable characters a weak second or third number that deserved to remain in Lenny’s trunk.

From the original recording, “Quiet” and “What’s the Use?” made a return to no real dramatic advantage other than being interesting tunes aurally. “The Venice Gavotte” had been re-purposed in 1974 as a delightful expository quartet (with lyrics by Stephen Sondheim, no less). That quartet still opens the show, but now we have an action-stopping Gavotte in Act II as well, reprising that material and then some, adding length if not interest. In short, Bernstein’s Candide seems to have more performance versions than Tales of Hoffmann. 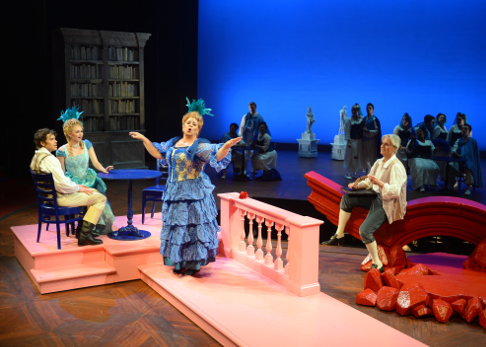 Back to the present review: In a survey, Candide was voted as the opera DMMO’s discerning audience most wanted to see and professional leasing arrangements now require that they use the official, composer-sanctioned Scottish Opera version. Des Moines’ entertaining staging stays true to the integrity of this “official” compilation, all the while seeking inventive means of enlivening it.

First off, Mr. Shell et al have quite correctly imagined this as a musical comedy. The satirical humor almost never fails to land thanks to craftily designed, richly nuanced interaction. I have never seen an audience more delighted by “You Were Dead, You Know,” including Mr. Prince’s legendary Broadway resurrection. Never. Shell knows his way around a comedy and a captivated auditorium was utterly engaged by his (often) ribald revelry.

I loved the whole improvisational feel of the evening. The choice of having Voltaire as a stand alone character, “writing” the show we were seeing as it transpired, was a master stroke. The formidably charming actor Wynn Harmon made much of his role as the motivator, scripter, and MC of the story. He steers the proceedings with aplomb and serves as the glue to hold this whole concept together and keep it careening merrily forward.

The sturdy baritone of Kyle Albertson not only enlivens Dr. Pangloss but serves up the cameo star turn of the pessimist Martin with panache. The latter character being wholly extraneous, Mr. Alberston nevertheless pins our ears back with his bombastic, cynical solo. (In a sad footnote, Kyle replaced the late Robert Orth who was to have performed these roles, and to whom the production was dedicated.) 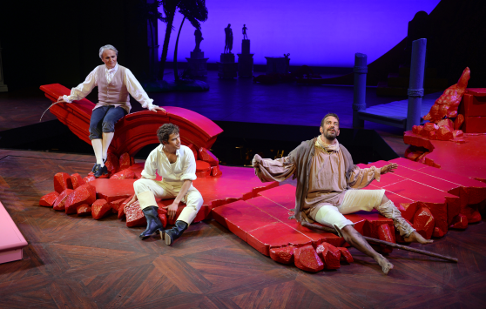 Tenor Jonathan Johnson is arguably the finest Candide of my experience. Not only is he boyishly appealing, he sings like a god. I have never heard the added aria “Nothing More Than This” more heart wrenchingly presented, all limpid tonal production and exquisitely poised sentiment. Deanna Breiwick is similarly stellar as Cunegonde. Eerily recalling Kristin Chenoweth (who famously played the role with the NY Philharmonic), Ms. Breiwick has it all: a plangent, flexible soprano of uncommon accomplishment; a savvy stage presence; and a meticulous musical technique that informs her well-rounded, polished portrayal. She literally stopped the show with her madcap, electrifying rendition of “Glitter and Be Gay.”

Emmett O’Hanlon’s self-important take on the egotistical Maximilian was well-served by a warm, responsive baritone and a lanky, handsome physique. Although he executed a slight Westphalian/German accent with skill, it was curious that no other Westphalian characters were so inclined and spoke in straight forward English. That decision was a curious distraction.

Eliza Bonet was a memorable Paquette, not an easy accomplishment since the character disappears for long stretches at a time. Ms. Bonet made the most of her every appearance embodying an infectious good humor, all the while wielding a vibrant, sizeable mezzo.

The venerable Jill Grove delivered the required star turn as a castanet-wielding Old Lady, singing the part with a lush, potent mezzo that made her traversal of “I Am Easily Assimilated” a real highlight. The production has curiously given her two “false start” star entrances. She comes on twice, each time “too early” in the progress of the story, castanets ablaze and is twice sent back off stage by Voltaire. This was a game attempt for a laugh, but did not quite land.

Curiously, in the Scottish Opera version of what was the Old Lady’s big monologue, which IS her star turn, the lines have been distributed between her and other characters, some of them choristers. The staging did its best with this revision, but I wish that the redoubtable Ms. Groves had been able to be given command of the whole original speech and left to manage its build and payoff.

Corey Bix was a larger than life Governor, threatening the paint on the walls with his commanding tenor. If he encountered a fuzzy patch or two, Mr. Bix knows how to sell a song and his artistic aplomb dominated his scene. Corey Trahan’s Cacambo was delectably witty. Mr. Trahan is a master of dialects (he uses several, each funnier than the last) and his comic timing is second to none. He enlivened his every scene and was yet another treasurable asset to this fast-paced evening’s entertainment. There are cameo roles too numerous to mention, all impersonated with ingenious individuality and securely sung by topflight talent. 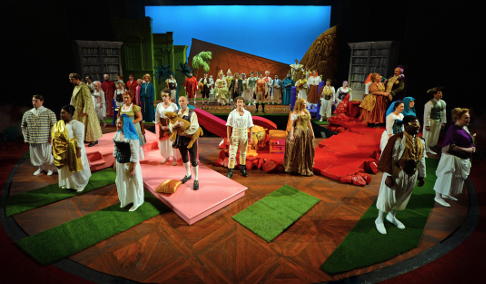 Thanks to the unique configuration of the Blank Performing Arts Center, director Shell’s staging has come the closest of any I have seen to suggest the atmosphere of the 1974 revival. Long before “immersive” theatre became today’s clichÈ for audience interaction and participation, Hal Prince “in the day” cooked up a Candide that had the audience everywhere in a circus-like configuration, and that saw actors passing conspicuously through patron seating, gadding about ramps that encircled whole sections, popping up in the audience, and tirelessly unfolding a fable that was often in dizzying motion. That was the great strength of that revival, and the same successful dynamic, albeit contained to stage and thrust, currently informs DMMO’s rambunctious presentation that spills and tumbles over every square inch of playing space.

Certainly Steven C. Kemp’s wildly original set design provided (primary) colorful additions with almost every change of scene. From the opening set of four massive, illuminated white bookcases, pieces came and went with such frequency (there are a LOT of different scenes) that I failed to notice at first that bits and bobs of most pieces remained behind, resulting over time in a rather cluttered collection of all the absurd locales and plot turns. The loudly applauded goof of having a flock of sheep “fall off” a gilded mountain in El Dorado, only to land in a clanking, cluttered, ignominious heap was alone the price of admission. Yahadda be there.

Having conducted a wrenching Wozzeck the night before, David Neely seemed to find a perfect way to cleanse the pallet as he led an effervescent reading of Candide. From the downbeat of the thrice-familiar overture to the stirring choral finish, Maestro Neely steered his accomplished forces with infectious relish.

Given the limitations of the edition that must now be used, might this have been the best of all possible Candide’s? The superb talent on display, the many happy solutions that mitigated structural challenges, the imagination and commitment to making Candide still work in the 21st Century, all lead me to say “yes.” I do know this:
As the principals and Lisa Hasson’s thrilling Apprentice chorus sang the full-throated a capella section of “Make Our Garden Grow,” enveloping us in one of Bernstein’s most unbearably beautiful passages, there was nowhere else I wanted to be. It was the best of all possible moments.