One only has to hear the first few notes of the fiddlers’ wriggle which
opens the overture to Le nozze di Figaro for one’s toes to start
tapping and one’s ears to jump to attention, so beginning the programme
with the overture and first three numbers from Mozart’s opera was a
sensible choice which got proceedings underway slickly. Thomas Payne – the
first of the performance’s four conductors – led the ROH Orchestra through
a light-footed rendition of the opera which, with the pianissimo
strings tingling and buzzing, whipped up some energy for the entrance of
Michael Mofidian’s Figaro, confidently surveying his domain and
energetically waggling a tape-measure. 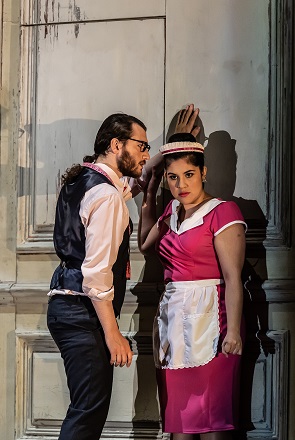 The Scottish-Iranian bass-baritone and Yaritza VÈliz developed a good
rapport during ‘Se a caso madama’, as the Chilean soprano used her
sparkling tone – and a shocking-pink frock – to distract the self-absorbed
Figaro from his bed-measuring chores, though given the cavernous nature of
the soon-to-be-weds’ baroque ‘garret’ it didn’t seem likely that the
removers would have any difficulty squeezing in the Count’s nuptial gift. A
little of the momentum built up was diffused by the rather slow tempo of
Figaro’s ensuing ‘Se vuol ballare’ though Mofidian sang with characteristic
precision and control.

The lovely richness of his bass-baritone was showed off to better effect,
though, in the closing moments of the Tower Scene from PellÈas and MÈlisande, when Golaud entered to scold his wife for
behaving so childishly with PellÈas. Golaud’s reflectiveness resonated
beautifully – there was a hint of menace, but also vulnerability – and it
was good to hear a more youthful voice in the role than is often the case,
bringing the half-brothers closer together in age. I had had my doubts
about the wisdom of selecting this scene to end the first half of the
programme: Figaro may start ‘in media res’, but I feared that it
would be a challenge to establish a credible and absorbing theatrical and
music ‘ambience’ by extracting a ‘slice’ from Debussy’s dreamy,
otherworldly opera. But, I was proved wrong by Noa Naamat’s thoughtful
direction of Hongni Wu, and by the freshness and anticipation which the
Chinese mezzo-soprano conjured as she draped herself across the window ledge of
the ‘tower’ and stretched down to the garden below. The soprano’s initial
unaccompanied phrases were as silken as her long tresses confirming that
impressive vocal presence that she displayed in Naamat’s recent production
of Henze’s


in the Linbury Theatre. Wu conveyed fairytale-like mystery while never
over-gesticulating, while the lightness of British baritone Dominic
Sedgewick’s upper range helped to evoke PellÈas’s earnest naivety and
fascination. As Sedgewick wrapped himself in MÈlisande’s hair, conductor
Patrick Milne summoned exquisite nocturnal glitterings and surges from the
ROH Orchestra, but the enveloping sensuousness of the moment remained
innocent, almost playful. Billy Slocombe’s lighting of this scene
contributed enormously to its enchantment, magenta and blue softly
darkening to highlight the dusky pink moon. 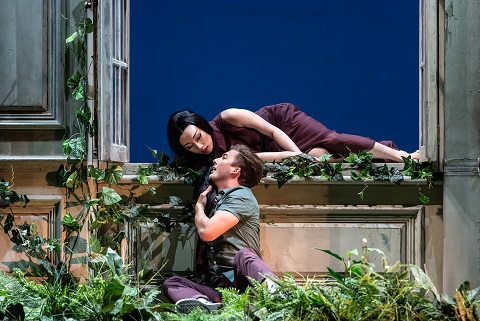 The Act 2 aria and duet from Saint-SaÎns’s Samson et Dalila was
lit with similarly striking effect, though here monochrome chiaroscuro
effects splashed with red were the order of the day, creating a tense
locale. Russian mezzo-soprano Aigul Akhmetshina relished the long
melismatic legato lines of Dalila’s ‘Amour! viens aider ma faiblesse’,
easily encompassing the extensive range as she luxuriated on a black
leather couch and wallowed in the seductiveness which she knows will
overcome Samson’s strength, richly supported by the ROH Orchestra under
James Hendry.

As the High Priest of Dagon, who urges Dalila to use her charms to destroy
Samson whose Hebrew followers have just conquered the Philistines,
Argentinean baritone Germ·n E. Alc·ntara sang confidently but was a little
overshadowed by Akhemtshina’s vibrant and luscious-voiced femme fatale. I
found Naamat’s direction a little too stylised in this scene – did the High
Priest really need to whip out a gun from beneath his black jacket, like a
stock-villain? Similarly, in the Act II temporale and trio from Rossini’s Il barbiere di Siviglia the singers seemed to be working too hard
to engender some comedy; as Almaviva and Rosina relished their planned
elopement, urged on by the impatient Figaro, the gestures were as lacking
in subtlety as the primary colour costumes. Undoubtedly, the exaggerated
quasi-farce effect was intended, but if you’re trying hard to be funny then
you probably won’t be. Wu and Sedgwick were pleasingly reunited as Rosina
and Figaro, though, while Thando Mjandana, a South African tenor
participating in the

, was a suave Count. 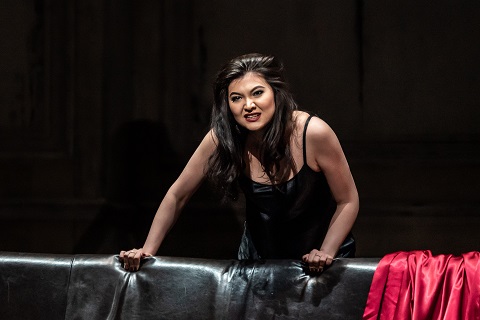 An excerpt from Act 1 of Verdi’s Rigoletto was considerably
elevated by South Korean soprano Haegee Lee’s terrific rendition of Gilda’s
‘Caro nome’. This was a measured and confidently crafted performance which
communicated character and feeling most impressively. Her compatriot Konu
Kim was an animated and lithe-voiced Duke of Mantua, Akhmetshina returned
to imbue Giovanna’s melodies with warmth, while Mjandana (Borsa) was joined
by fellow South African Chuma Sijeqa, also a Link Artist, whose appearance
as Rigoletto may have been brief but who made an immediate and strong mark.
Verdi rounded things off when the full complement of

joined together for a rather confusing front-of-curtain performance of the
fugal finale of Act 3 of Falstaff, which made up for any
lack of theatrical clarity with a generous helping of obvious, and
engaging, joie de vivre.

The best singing of the night, for this listener at least, came earlier in
the evening when the first JPYA countertenor, Patrick Terry, and American
soprano Jacquelyn Stucker performed Orfeo’s tragic submission to Euridice’s
desperate pleas, as depicted by Gluck in Act 3 of Orfeo ed Euridice. Again, I found Naamat’s direction a little
stylised – too much hand-wringing, head-clutching, tree-hugging for my
liking – but the establishment of the scene’s emotional tenor was
accomplished, and again aided by Slocombe’s lighting designs which turn
soft grey to blood red and then, when VÈliz’s Amore had restored life, love
and liberty, returned through orange to a golden glow of joy. Stucker
communicated every atom of Euridice’s confusion, anger, passion and
despair, in ‘Che fiero momento … Fortune ennemie’, and so fiercely emotive
and vocally compelling was this grand lament that it was no wonder that
Terry could resist her pleading no longer before giving in to his own
outpouring of grief, ‘Che farÚ senza Euridice?’, which was no less
powerful.