Reading the booklet before the National Youth Orchestra of the USA’s Prom,
I was struck by something written by the young American composer, Benjamin
Beckman, in his notes for his work, Occidentalis (2019). In the
space of two sentences, he manages to mention human rights, freedom,
xenophobia, voting patterns, poverty, religious persecution and
immigration. The photograph accompanying his text is headlined ‘Chasing the
American Dream’, and the very concept of westward migration into America is
a central theme of Beckman’s piece. Today, all of these ideals are under
threat – and Beckman’s Occidentalis, a composition written on the
basis of what it means to be American, questions all of this.

Of course, the notion a nineteen-year old American composer should have a
social conscience isn’t surprising, especially when contextualised through
the prism of the century in which he was born and the politics which have
shaped it. What is unusual is both the confidence with which he expresses
it and the musical direction it takes. The very choice of the word he has
used to title his short work, of which this was the European premiere, is
rich with allusion: To the nautical maps used, the specific westward
direction and even its Latinate origins which takes us through centuries of
history. Migration is the bedrock on which American society was founded,
which links it to western Europe, but which also gives it unlimited
possibilities.

Musically, Occidentalis, if slight in length, is clever. If it
most obviously evokes Copland in its opening, it’s strikingly forceful in
alluding to one of the most notable ÈmigrÈ composers to take the journey
westwards to the United States, Stravinsky. The brass writing for Occidentalis (Beckman is a horn player) is bright in the
fragmented fanfares which suggest something of the New World; elsewhere,
the impression is that horns and trombones are the confident link on which
much of the threads of the work are held together. Strings can be rich in
their depth, and woodwind are like kaleidoscopic fractals. Beckman – at
least in this piece – is a composer who doesn’t look to the style of Adams
or Glass, but backwards towards Howard Hanson.

The size of the orchestra for Occidentalis is vast; Berlioz, in
his Les nuits d’ÈtÈ, uses a much smaller sized one. It’s clearly
the case that the National Youth Orchestra of the USA can play supremely
well at either end of this of orchestral spectrum – though the brilliance
of their playing during the Berlioz songs was often quite extraordinary,
even ravishing. In fact, the whole performance was so rich, so intense it
was almost too much to bear at 11am on a Sunday morning. Much of this had
to do with the mezzo-soprano, Joyce DiDonato, a singer who really takes us
on a journey not necessarily into, but completely through, the music she
sings. She forces audiences (much as Haitink could sometimes do with the
Adagio of Mahler’s Third) to hear with such rapt silence, to draw thousands
of people into a performance as if they were a single listener that the
effect is little short of magical. Often during these songs you could hear
a pin drop – the spell only broken by a smattering of unwelcome applause
between them. 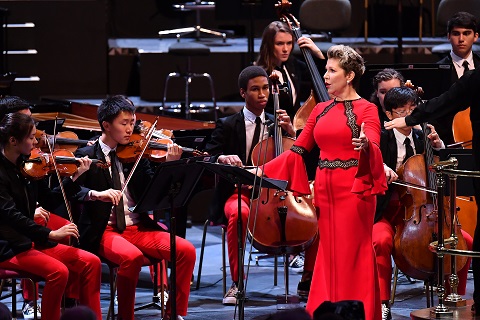 If there is one theme which unites this wonderful cycle it is the loss of
love, and an aching loneliness. DiDonato is perhaps a little more
melancholic than most singers; and almost everything is in anticipation
towards the emotional fulcrum of the cycle, ‘Absence’, where the grief and
pain are expressed with little sense of resolution. Her lower register is
to die for – the words almost loop and spiral around her voice like a dark
shadow; it was beautifully tenebrous here. It’s often suggested that the
first song in the cycle, ‘Villanelle’ works less well with the mezzo voice
– but DiDonato has sufficient freshness and buoyancy in her tone to make it
sound zesty and bubbly as it celebrates springtime for the lovers. But even
here, there is a suggestion of pensiveness and desolation, of that to come.
It works, because when she comes to the ‘Le spectre de la rose’ the phrases
are haunted, like half-broken limbs on withered trees moving in a shallow
breeze. There was a spectral quality to her voice, perhaps made even more
breath-takingly colourful by an orchestra which seemed to play like
phantoms against it.

If ‘Sur les lagunes’ is one of the most melancholic of the cycle it is also
one of the most evocative, especially through the orchestra. DiDonato
brought all the breadth – and depth – of Purcellian lament to Gautier’s
poem; Pappano drew the sound of waves washing against the edges of her
voice. In ‘Au cimetiËre’ those ghostly apparitions, the bereavement among
the tombs, took wing through the mezzo’s darkened timbre. If DiDonato felt
pale, gently reposed and singing through the orchestra rather than over it
simply added to the impression that both were walking through the cemetery
in shimmering veils. With L’Óle inconnue’ we return to the more sparkling,
feverish intensity of the first song, though with the theme that love is
both unattainable and eternal. DiDonato sung it ripe with hope, the upper
register of the voice teetering on the edge of a glimmering scintilla of
newly discovered freshness – but the careful phrasing suggested otherwise.

This was a performance which in some ways looked indisputably towards
Mahler and his song cycles. DiDonata’s voice has all the range, from the
bottom to the top, of an organic instrument; in many ways it is a paradox.
It can be Romantic – but its horizon goes beyond this into expressionism.
Antonio Pappano drew hugely descriptive, lovingly phrased playing from the
strings and woodwind of the scaled-down orchestra. By any standards, this
was a magnificent performance.

Richard Strauss’s Eine Alpensinfonie saw the National Youth
Orchestra of the USA back at full strength for a performance of this
mountain-climbing tone poem which was very much – rather appropriately as
it happened – a young person’s hike up and down its craggy Alpine summit.
Antonio Pappano doesn’t linger in this score, dashing it off in a little
over forty minutes. It didn’t always feel this fast, with the opening and
closing ‘Night’ sections having a brassy breadth to them which sometimes
challenged the orchestra. But at its best, at its most precarious, this was
a thrilling and dangerous performance which had the orchestra sliding on
the ice, almost losing balance on the glacier and never bothering to take
cover from a thunderstorm of earth-shaking intensity.

The Royal Albert Hall is almost made for Strauss’s epic Tone Poems. The
wash of sound Alpensinfonie gives off is unforgettable – perhaps
no more so than in the twelve off-stage horns, and pairs of trombones and
trumpets, here played superbly from the galley by the brass of the National
Youth Orchestra of Great Britain – but it’s also a work which reveals much
through its inner details. Clearly the conductor matters here, or at least
his ear does. I remember Giuseppe Sinopoli’s last Prom (given with the
Philharmonia Orchestra in August 1990) of Strauss’s Ein Heldenleben where the detail from the orchestra was simply
magnificent. Pappano didn’t really worry about such things; ‘Vision’ really
was a mess of musical hieroglyphics and occluded textures, harps pretty
much inaudible (they really don’t need to be – and they were on my side of
the platform).

But who is ever going to forget the ‘Thunderstorm’ unleashed by these
players? There is no more vivid representation of a storm in all music, and
this was one of the best played performances of it I have heard. It was
shockingly good. A wind machine one could actually hear, incisive timpani
playing – the whole thing was just wild and tremendous fun. Amid all this
virtuosity, this was also a performance which was not short on taste. Here
is an orchestra, not massively over-compensated for in strength of numbers
as some youth orchestras tend to be, which has beautiful tonal, and even,
weight in the strings and a blended, golden woodwind section. This was an
impressive, triumphant performance, to close a memorable Prom.


This concert will be broadcast on BBC Four on Friday 16th
August 2019 and is available on BBC iPlayer for 30 days.