The ambitious project tackles a disturbing violent pattern ripped from the headlines, namely, the disproportionate police shooting of black men. It does not need a spoiler alert to tell you that we already know that such a tragedy will be covered in the piece. And since there is only one African-American family and one son in the show, there is little suspense in who the victim(s) will be.

The interest, therefore, resides in the character relationships, and the journey they take before and after the killing. I wished that the resulting piece had been as moving and sobering as its well-meaning intent. At this point in its development, I found Blue to be a very promising work in progress that has much more potential to be mined and refined. Certainly the creators are highly acclaimed practitioners and their expertise is everywhere evident in the project. 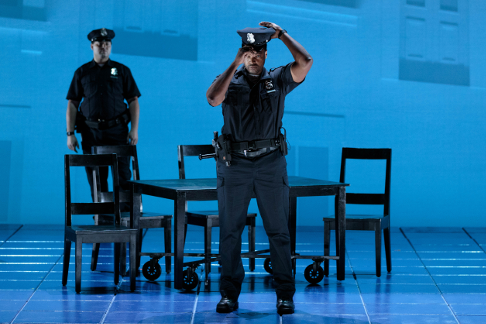 (Front) Kenneth Kellogg as The Father

Tazewell’s story proceeds in pretty big chunks, albeit tinged with eloquence. The Father becomes a policeman and banters with his colleagues. The pregnant Mother chatters with her girlfriends. The Son is born and grows up (almost instantaneously) to become a rebellious teen. Father and Son argue. Tragedy strikes (during intermission). The grief stricken Father confronts the Reverend. The Son is buried as his parents weep. And the final flashback scene (or is it fast forward phantasy?) evokes the healing ending of the film Places in the Heart.

To my taste, each scene went on past the time its point was made, becoming repetitious and weakening the very real merits of the material. The character establishment was very solidly done. The character development deserves more attention.

It does not help the impact that the Mother disappears pretty much after her son’s birth in Act One, and that we only see her next at the funeral. It did not arouse my sympathies that the belligerent teenage Son is only given an argumentative scene with his Father, that is not only devoid of loving feelings, but presents the Son as quite unlikeable. 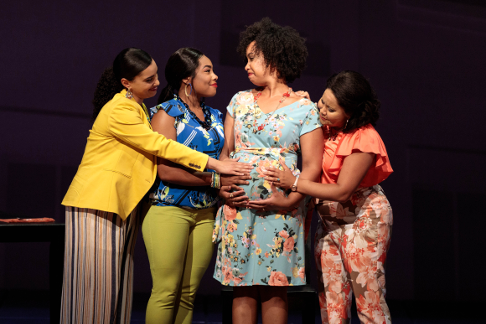 Too, there are illogical moments like the Father’s confrontation with the Reverend in which dad does not want to hear any comfort the priest offers. As he rails against the cleric for a very extended scene, I wasn’t sure why the Father was there, or why he didn’t just leave. Because we never got to experience the love this family shared for each other, the lengthy funeral, although rife with vocal beauty, was generically sad. Without ruining the surprise of the final scene, it seems its warmhearted sentiments should have been on display much earlier in Blue. There are so many rich possibilities in fine-tuning this important endeavor, that I encourage the creative duo to amplify and tighten dramatic beats and flesh out these iconic characters.

The gifted Ms. Tesori is incapable of being uninteresting and her score is often stirring and, as is her wont, certainly unique to the project at hand. There is a wondrous rising scale over an octave that is immensely appealing. The score is commendably singable, and the ensemble writing is often shimmering, with a sextet of voices intertwining to great effect at the funeral. The soloists are given wide-ranging declamations that have interesting variety. The Father has a Wheels of a Dream number that is very melodious and enjoyable, if lacking the final poignancy that might define him even further.

I very much liked Ms. Tesori’s trio of (sometimes back-up) singers, one male, one female, that recalled her fine work in Caroline or Change. She also has made judicious and exceptional use of a cinematic swell and sweep that help the concept to soar. 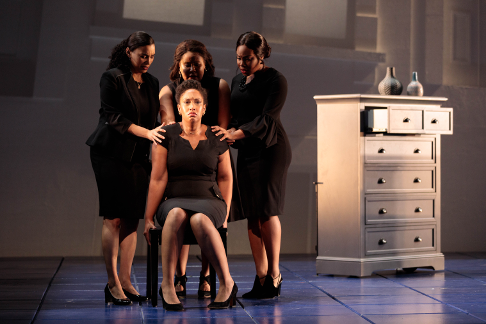 The production is staged simply and effectively by Tazwell Thompson himself. All of his hallmark qualities are there: Efficient use of movement, well-internalized portrayals, economy of gesture, and telling stage pictures. Donald Eastman’s unfussy set design consisted of carefully selected furniture, that gets re-arranged in front of a backdrop which is a forced perspective of white row houses. Robert Wierzel’s evocative lighting includes the ability to vary the color of the backdrop to telling effect. Jessica Jahn’s effective costumes greatly helped to establish the characters. I quite admired how Ms. Jahn went for a more stylized look at the funeral, and that Mr. Eastman subtly changed the furniture and dressing to black colors after the tragedy.

The eminent John DeMain conducted this varied composition with polish, panache and a sure hand. The style occasionally found the large orchestration getting a little rambunctious for the unamplified singers, but Maestro DeMain successfully reined his accomplished players in to provide colorful and harmonious support. The small cast acquitted themselves well.

Kenneth Kellogg gets the most stage time as the Father and he moored the production with a solid presence and a robust baritone. Mr. Kellogg had all the fire power needed for the searing outbursts, but also showed he could scale back for very affecting introspective musings. His resonant, rolling bass is a remarkably fine instrument and his powerful role assumption is the work’s chief glory. 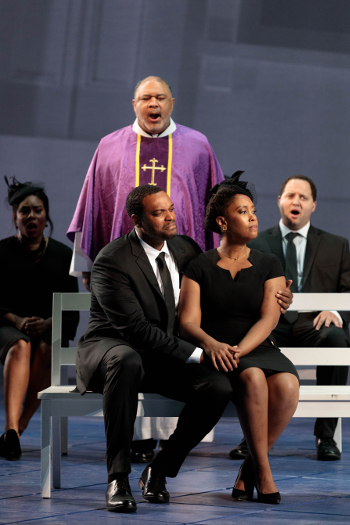 (Clockwise from top) Gordon Hawkins as The Reverend, Briana Hunter as The Mother and Kenneth Kellogg as The Father with members of the ensemble

Briana Hunter was a wholly engaging personality as the Mother, first all girlish anticipation as she is expecting her baby, then all classic tragedienne as she keens in mourning. Her smoky, alluring mezzo is capable of playful wide-ranging deployment one scene, while also able to pour out profoundly arching grief in another. Her dramatic commitment is second to none, although on occasion she pushed a bit and a slight rasp came into her delivery. Ms. Hunter is a distinguished alumnus of the Apprentice Artist program.

Aaron Crouch was eminently convincing as the contentious teenaged Son, his youthful slouching frame housing a weighty tenor that is quite baritonal at the bottom, but brightens up as it ascends. He was challenged by a few high exposed phrases where his technique tightens, but Mr. Crouch contributed a solid impression and held his own in the heated argument with the seasoned Mr. Kellogg. As the Reverend, veteran Gordon Hawkins brings a wealth of experience to bear along with a penetrating, poised baritone of uncommon power and malleability. Mr. Hawkins’ duet scene with Mr. Kellogg crackled with tension.

Arian Wehr’s petite presence, effortless charm, and charismatic, limpid soprano earned her a nice ovation for her roles as the Nurse and Girlfriend and Congregant One. Brea Renetta Marshall’s hauntingly lovely soprano made a fine contribution as Girlfriend and Congregant Two. Mia Athey’s plush mezzo rounded out the women’s trio, and her sincere delivery was welcome, but while her top rings out quite securely, some lower passages were less steady.

I applaud Glimmerglass for including a work of such diversity in its season in an admirable outreach to attract underserved demographics. This speaks powerfully to all people, but it must especially resonate with the community depicted in the work. It was curious to note that, in spite of the company’s well-oiled marketing and audience development division, the audience was almost completely Caucasian. Nevertheless, they seemed to find great resonance in Blue and roundly cheered its many accomplishments.