Raghu’s production of Donizetti’s nineteenth-century comic gem, L’elisir d’amore, which set the action in rural Norfolk during
World War 1, nestled naturally into the 17th-century barn –
built c.1700 as a non-conformist Methodist meeting chapel – and the vibrant
singing and playing of an esteemed cast, the talented Into Opera
Youth Company and the Istante Collective, led by the galvanising baton of
John Andrews, swelled euphoniously into the octagonal vaulted roof of the
central atrium.

With the farmers and field-labourers having departed to play their
patriotic part in WW1, it falls upon the women to ditch their dresses, don
the dungarees and trade the parlour for the pitchfork and plough. When
Adina learns of her father’s death, she is roused from her grief by her
duty to keep the fields tilled and the harvest reaped. The womenfolk
valiantly pull on their wellies, dig up potatoes and hoist milk churns.
Having stepped up to the mark and rallied the home front troops, Adina’s
not that eager to relinquish her command when Sergeant Belcore arrives on
the farm. Nemorino – the loyal, lovelorn farmhand who’s stayed at home to
help his beloved Adina – is equally disconcerted by his rival’s military
swagger. But, help is at hand in the form of the nattily dressed Dulcamara,
a travelling salesman whose magical medicines promise the gullible rustics
health, wealth and happiness … 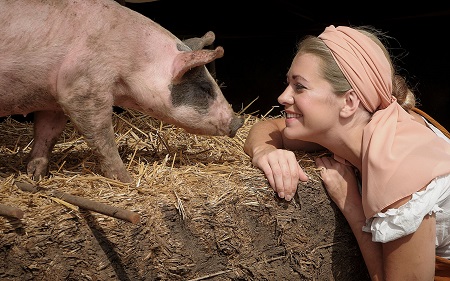 Designer Lorenzo Russo Rainaldi has a ready-made set at his disposal. All
that’s needed to fully immerse us in life on the farm are some dangling
horseshoes, a few agricultural accoutrements and wooden crates bursting
with ripe apples and verdant carrots. The verisimilitude is aided by Ben
Ormerod’s discrete lighting and, especially, Jasmine Ricketts’
imaginatively devised choreography which neatly and slickly conjures the
busyness and bustle of farm life within the confines of the fairly small
stage. Raghu makes the most of the dimensions of the venue to suggest a
wider expanse and her attention to detail is notable. She establishes and
sustains a narrative with a consistency and credibility which is sadly all
too rare in more familiar, ‘conventional’ opera houses.

Raghu’s direction of the Into Opera Youth Company is exemplary.
The children burst vigorously and joyfully onto the stage straight from the
fields, clutching bunches of freshly harvested carrots, and confidently
find their places at the foot of the stepladder upon which Adina is
perched, reading a book. They listen avidly to her tales of Tristan and Isolde, grabbing the book to gobble up the amorous
adventures, then snatch it from each other, eager for saucy snippets. When
Nemorino ventures a peek, an insouciant young hand turns the tome up the
correct way. Raghu involves the young singers throughout: they provide
Belcore with a sunflower with which to woo Adina, spy on the romantic
rivalries and form a hearty-voiced, readymade rural troupe of bridesmaids
and page boys dressed, of course, as bunnies, chicks and piglets. 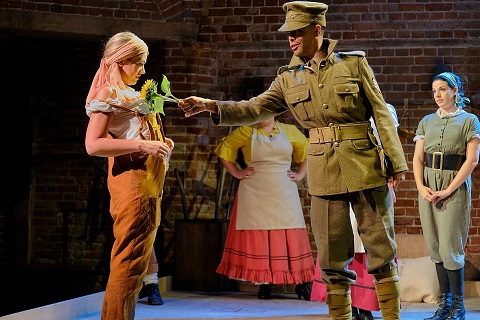 The adult chorus – Emily Kirby-Ashmore (soprano), Lara Rebekah Harvey
(mezzo-soprano), Gareth Edmunds and James Beddoe (tenor), and Jevan McAuley
(baritone) – are managed with no less aplomb (although I wasn’t sure about
Raghu’s occasional use of theatrical devices which seemed at odds with the
general naturalism). They move fluently around the stage area, working and
gossiping, and they dance a nifty nuptial contradance, ducking and diving
under the festive bunting. When Adina rejects Belcore’s hasty advances,
it’s the confident catching of the apple which the chorus have tossed
teasingly amongst themselves that seals her superiority over the Sergeant.

On opening night, the cast gave a strong and consistent performance. Given
the challenges presented by the open nature of the performance space, and
with the conductor and instrumentalists placed to the left of the stage,
the singers’ intonation and ensemble were both impressively accurate.

Fleur de Bray has an attractive but fairly light soprano and in the
ensembles her Adina sometimes failed to soar with quite enough gleam and
brightness. But, de Bray took immense care over her characterisation and
the vocal phrasing. This Adina was determined rather than feisty, and her
affection for Nemorino was apparent from the first. ‘Prendi, per me sei
libero’ throbbed with heartfelt feeling. I’ve enjoyed Thomas Elwin’s
performances with Classical Opera, though looking back it’s interesting to
see that I thought that in

in March 2018 he ‘did not always make the extended melodic gestures cohere,
but his tone was appealing’, for I’d suggest that the same was true here.
Elwin has a sure technique, acts astutely, and can make an individual
phrase tell; but ‘Una furtiva lagrima’, though focused and at times
affecting, did not convince me that Elwin has yet mastered the art of
building the individual units into a cohesive expressive unity. But, I’m
probably being unfairly ‘picky’; Elwin’s Nemorino was beguiling and all in
the Barn were clearly delighted when the honest lad got his girl. 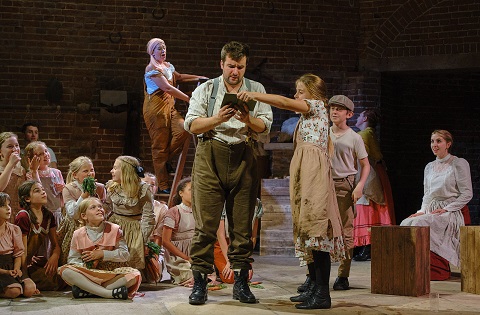 Sofia Troncoso made an impressive mark as Giannetta: her mezzo has real
punch, clarity and brightness and – in common with all the cast – she acted
attentively. As Dulcamara, Andrew Slater blustered a bit at times – more
speech than song – though the climaxes and cadences always hit the target
with panache. But, he was a genial charlatan, keen to make a quick buck
from his vats of vodka and cider aka elixirs, and not unduly
manipulative. It was a neat idea to have Dulcamara’s phlegmatic sidekick –
a touch of Leporello here, delivered with style by a member of the Youth
Chorus – provide the horn player with a sheet of music indicating the
required entrance fanfare. 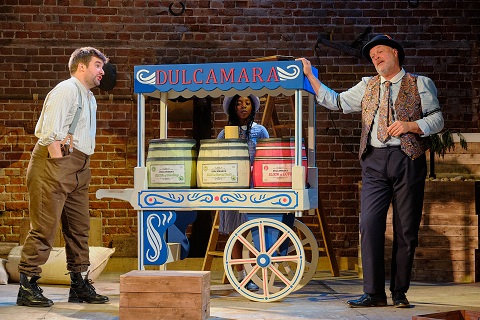 
The Life to Come


, with Surrey Opera, and that he so swiftly settled into the shoes of the
braggart Belcore says much for the range of his acting. Mvula worked hard –
perhaps the effort was a little too evident at times, though admittedly we
were seated very close to the stage – and balanced boldness and blunderbuss
effectively. ‘Come Parido vezzoso’ was rather plodding; hopefully the tempo
picked up for subsequent performances. There’s a fine singing actor here,
though, and we’ll undoubtedly be seeing more of Mvula. 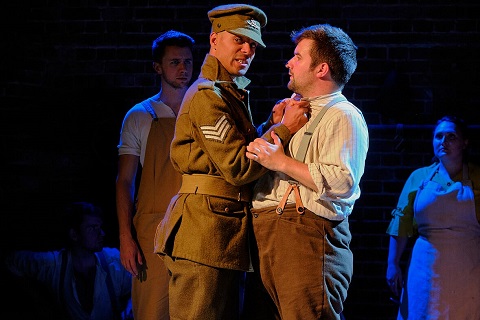 Into Opera
were lucky to have conductor John Andrews at the helm: unfussy but
meticulous, encouraging but also demanding of high standards, he conducted
a fluent performance which sailed forth confidently, the busy finales
making absolute musical and dramatic ‘sense’.

Into Opera
was launched in September 2017 with the aim of getting ‘more and more
people into opera’. Their first project, A King’s Ransom,
involved a collaboration with composer Patrick Hawes and hundreds of
primary school children across Norfolk. This production ofL’elisir marked the inaugural season of the Norfolk Into Opera Festival. The opening night was preceded by a
hog roast in the grounds of The Octagon Park, and followed by a Gala
Concert, Opera Unwrapped, with a selection of acclaimed opera
singers, including tenor Christopher Turner and soprano Sofia Troncoso, and
two further matinee performances of L’elisir. Raghu confidently
declares:

“We will create high quality opera experiences which are affordable and
don’t break the bank. We are starting a creative revolution to overturn
this negative stigma and instead, enthuse communities about the potential
of this art form. We want to convince you about the ability of opera to
bring people together, to tell compelling stories and to make us think
about questions that are relevant and important to the society and world in
which we live today.”

I’m pretty sure that anyone who drank the Elixir of Opera in Norwich last
week will need no persuading.

All images © Peter Marsh at ashmorevisuals