There have been many iterations of this musical over the years, but the version currently on stage at the Alice Busch Theatre is easily the most effective I have encountered. Thanks to director Francesca Zambello’s sure hand and past experience with the piece, the staging is exceptionally sure-footed and cogent.

Showboat is really the only revivable Broadway show of the 1920’s, an era more known for dated froth and lavish revues. The reason for Showboat’s enduring appeal is partly owing to Kern’s evergreen score, partly to Hammerstein’s expert adaptation of Edna Ferber’s novel of the same name, and partly to the stirring, daring exploration of themes of race relations and miscegenation. It was a daring move to present an integrated cast on a Broadway stage in 1927. In the festival at hand, Showboat also contrasted memorably with Blue, another opera on the schedule that dealt powerfully with the issue of race in America. It is sobering to note how some things have not changed much since Showboat’s premiere. 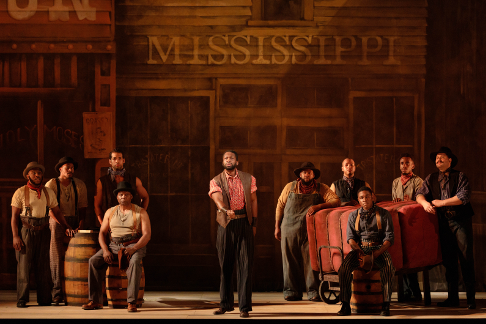 Peter J. Davison’s modular set design was all one could wish, and his ingenious use of flying drops, rolling wagons, and the enormous titular boat was colorfully effective. Of the many scenic effects, Mr. Davison’s red-trimmed, white, two-tiered Cotton Blossom, complete with paddle wheel, was especially impressive. It could come apart to be slightly re-configured to several different looks, and it proved sturdy enough to accommodate a large number of cast members who scampered all over it to great effect.

The action takes place over a 40-year period and much of the success of conveying that passage of time is owing to the remarkably varied costume design by Paul Tazewell. Between the dozens and dozens of costumes, and the voluminous set pieces, and the large cast of performers, I am not sure where it all lives offstage. The stage manager(s) could surely qualify to be an air traffic controller at JFK. The flawless flow of the ever-changing changing scenery was a highly commendable achievement.

Mark McCullough’s splashy lighting design was another fine component, including miniature lights that were cleverly built into some of the showier set pieces. Samantha M. Wootten contributed another exhaustively varied, perfectly realized hair and make-up design. Choreographer Eric Sean Fogel crafted a series of enjoyable production numbers, that were well-executed by the large group of actors, including Katherine Kozak’s admirable chorus, who performed exquisitely through the festival. It is to the great credit of Ms. Zambello and Mr. Fogel that the story was always well focused, that the movement was well paced, and that, no matter how full the stage was, it never once looked crowded. 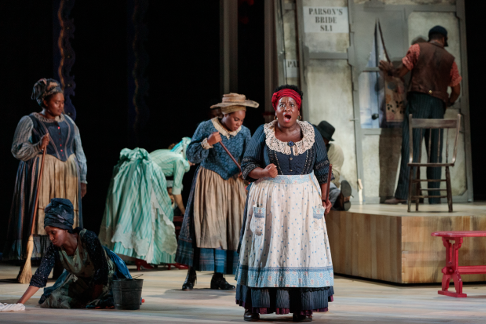 Jim Lowe presided in the pit and he brought out every lick of color and pizzazz that is present in this classic orchestration. The lyric beauty of this varied score, which contains some of the greatest pieces in the American songbook, was lovingly rendered with well-considered pacing and balance. It is always a pleasure to hear unamplified voices in this repertoire and the soloists did not disappoint.

Lauren Snouffer proved to be an ideal Magnolia, diminutive and appealing, and with a shining voice kissed by the angels. Her freely produced soprano has an immediacy and polish that were very endearing and she ably communicated the progression from naïve teenaged girl to an older but wiser woman. Her total stylistic command of this music was always abundantly evident.

Pairing her as Gaylord, Michael Adams not only cut a dashing figure but also deployed a creamy, gleaming baritone that gave significant pleasure. Mr. Adams made it entirely believable that a rather ne’er-do-well character could charm and seduce. His reconciliation with his adult daughter was very touchingly managed.

Broadway hoofer Lara Teeter was effortlessly endearing as Captain Andy, his loose-limbed strutting and prancing suggesting an over-caffeinated Dick Van Dyke. Whenever his character had focus, Mr. Teeter commanded the stage. As his wife Parthy, Klea Blackhurst was a harridan with a heart of gold, and admirably managed to find more variety in the part than the script contains. 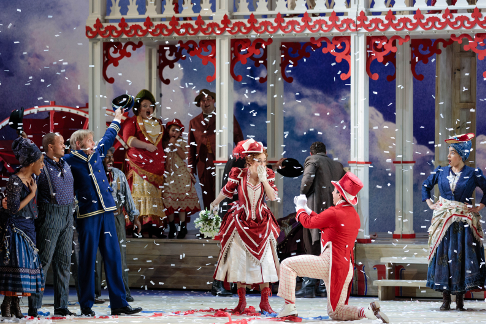 The stylish actress Alyson Cambridge made for a memorable Julie. It is hard to believe how little stage time the character actually has, when someone like Ms. Cambridge illuminates every moment with such heart and soul. Her rendition of Bill contained just the right mix of nostalgia and despair. Justin Hopkins is a powerful Joe, nearly stealing the show with his soulful reading of Old Man River. Mr. Hopkins’ refined bass rolls along just like the river, with a steady current of orotund, burnished phrases. Judith Skinner has just the right amount of brassiness, sassiness and sense of fun as Queenie, whose powerful contralto delivered several star turns that numbered among the show’s highlights.

Having heard Abigail Paschke’s silvery soprano excel with Depuis le jour in the Apprentice Artists auditions a few days prior, I was not prepared for the complete turnabout in her assured assumption of Ellie May. Ms. Paschke’s well-controlled belting and sure-footed dancing provided excellent comic relief from the show’s somber themes. Grant Wenaus matched her note for note and step for step in the role of her song and dance partner Frank. Charles Eaton had several shining moments as Julie’s husband Frank.

In this sterling production of Showboat, every opportunity was seized to make it the memorable success it is. Bravi tutti!