The piece was the first commission by San Francisco Opera’s esteemed Merola Opera Program that trains promising young artists. If the high quality of the writing and the riveting performance is any indication, opera does indeed have a bright future.

The creators have based their intriguing Faustian tale on the novel Si j’étais vous by Julien Green. Mr. Scheer has unleashed on us a libretto of wickedness, wit, and wisdom that has more disarming twists and turns than a rural Alpine highway. Mr. Heggie has crammed the fantastical score with his usual cornucopia of melodious invention that runs the gamut from jarring confrontations to seductive exhortations to creepy chants to soaring outpourings above the staff that send a chill down the spine in their forceful beauty. If there is anyone writing more knowledgably and gratefully for the singing voice these days than Jake, I don’t know who it is. 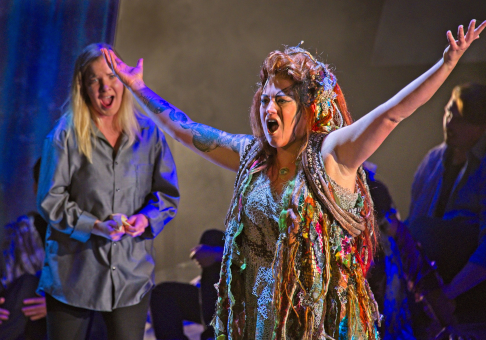 The story is really a journey about finding one’s identity. The writer Fabian has been in a fatal car accident, but in the opening scene in the ambulance, the devil in disguise as an EMT zaps him back to life and makes a bargain. He may sing his soul into other people and live forever by assuming their lives or choose to die by living as himself.

The devil in this opus is the beautiful, nefarious, shape-shifting temptress Brittomara, who revels in her destructive misdeeds in the guise of an auto mechanic, a bartender, a hairdresser, a spectral apparition, and the afore-mentioned ambulance attendant. She is omnipresent and the neat trick is that while the audience always knows she is the manipulative devil, the characters on stage do not.

Fabian meets Diana at the auto shop where she is picking up her car and his wrecked auto is on display. Although he met her at college some years earlier, Diana did not remember him or know that he had an interest in her. Fabian finds his journal in his wrecked car, and in it has been added an ancient Hindu phrase that, if he chants it while placing his hands on another person, transfers his soul into that unsuspecting host.

Infatuated with Diana, Fabian wants to find an identity that she could love. In any case, per his bargain with Brittomara, should he ever return to his original body she would take everything from him. We learn very quickly how things will go down with his boss, Mr. Putnam; then with a handsome punk Paul, who he encounters in a bar; then with a strapping policeman who responds to a crime scene; and with others unnamed and too numerous to mention. 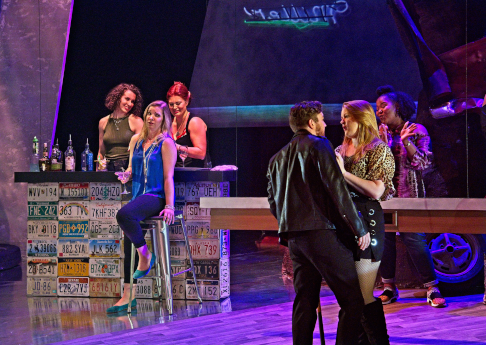 Diana has been commiserating with her bestie Selena, and slowly figures out that she has been coming in contact with Fabian in his various incarnations. The discarded bodies of the other characters collect in a sort of zombie world until something or someone might free them. The opera culminates when Fabian must decide to continue to be someone he is not, or die being himself.

As complicated as this may sound, the script, score, and production elements combine effortlessly to keep the complicated interactions careening along at a breakneck pace of dramatic intrigue and aural pleasure. The composer has pulled off a great effect as each character that gets “taken over,” subsequently assumes a different musical personality once Fabian inhabits them.

While Mr. Heggie composed the score with the young Merola artists in mind, he did not write down to them, nor did he need to. Jake stated that he wanted to challenge them and wanted this piece to be of a richness and sophistication that it will be taken up by other opera companies.

There is a great joy in hearing talented, fresh-voice singers present themselves in new roles. When we see standard repertoire with a long performance history, we still have Leontyne and Placido and Dolora and Jonas in our ears. Anyone assuming such roles is challenged to meet expectations. With a premiere piece like this, singers are liberated to impress us on their own merits, and well, hey not only impressed, they dazzled.

The character of Diana takes the story’s greatest journey, starting out at sea in her life, looking for a good (or good enough) time, and after a wrenching self-discovery, ending up prepared to sacrifice herself to save her friends. From her first naive conversational lines to the chilling simplicity of her final phrases, soprano Anne-Marie Macintosh was engaging and proved to be every bit the anchor of the opera. Ms. Macintosh has a seamless technique, attractive lyric timbre, and an admirable evenness through her extensive range. 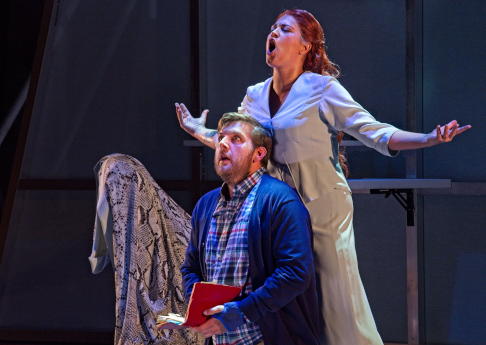 When the tension gets churning, and the orchestra ramps up the stakes, this accomplished singer can ride the moment with ease, hurling out ever ascending phrases of spine-chilling power and beauty. There is nothing in this role that eludes her; and her attractive, easy stage deportment makes it totally believable that Fabian would be smitten with her.

Brennan Blankenship was a marvel of a Brittomara. The role asks her to be manly, womanly, seductive, evil, alluring, funny, multi-accented, and overpowering, often within the space of a few bars. Ms. Blankenship delivered all the dramatic goods in spades, from dead panning one liners to nerve shattering domination. And she sings, too! The mezzo has an arresting arsenal of vocal effects at her command.

She purred worthy of a topflight chanteuse in a sultry number about a symbolic melting ice cube. She sassed and bossed with meaty mid-range dexterity as she set the inexorable rituals in motion. And then she upped the vocal ante with ever poised, arching vocal lines that were as exuberant as they were stinging. Both

Ms. Macintosh and Ms. Blankenship have defined these roles for me and have set the bar very high indeed.

As the real Fabian, tenor Nicholas Huff was suitably self-effacing and anguished in his ultimate decision to live on, whatever the cost to others. His instrument has fine presence and a warm sound, and he deploys it with conviction and musicality. There are one or two of the very highest passages that challenge him at this point in his development, but he nonetheless breezed through role with moxie and professionalism.

As his garrulous, grumpy boss Mr. Putnam, Rafael Porto blustered and bullied with power and punch. His substantial bass-baritone had sheen and allure, especially after he softened his delivery when Fabian took over. His subsequent scene in the bar, where he encounters Diana as Fabian-Putnam had enormous appeal in its gentle awkwardness.

Timothy Murray showed off a well-schooled baritone in the role of the handsome barfly Paul. His swagger and self-importance were mirrored in his solid, burnished vocal tone and mellifluous phrasing. He was also admirably at ease showing off his tattooed physique when a love scene gets interrupted at his apartment, by his drunken girlfriend, Rachel. The latter was vividly portrayed by Edith Grossman, who lavished the role with her sturdy, plummy mezzo and a loose-limbed physicality befitting an overindulgent party girl.

Edward Laurenson’s handsome baritone and engaging presence were a perfect fit for the policeman Jonathan, whose role was all too brief given the quality of Mr. Laurenson’s vocal presentation. The character Selena is Diana’s rock, and Elisa Sunshine’s steady, vibrant soprano made the most of her every moment. Ms. Sunshine also mined every bit of drama out of Selena’s revelatory final encounter with Diana.

Brandon Scott Russell brought a teddy bear lovability to the role of the world-traveling photographer, David. Mr. Russell also imbued the part with honeyed singing, sporting a free-flowing tenor of considerable beauty and accomplishment. The sopranos Chelsea Lehnea and Amber R. Monroe, chirped with characterful ease and obvious enjoyment as two women in the bar.

The chorus performed with stylish assurance, especially in the ritualistic “day of the dead” scene where they sang with riveting power and unity of purpose. Since no Chorus Master is credited, I am going to presume their excellence is owing in no small part to the opera’s conductor, Nicole Paiement.

The diminutive Maestra is a local celebrity in the opera scene and merely her ascension to the podium was cheered. She emphatically lived up to her regard, conducting a throbbing, forward-moving, musically fluid reading that was infused with theatricality. Indeed, Ms. Paiement nurtured an exquisite unity of purpose with the stage and expertly supports and partners her cast of singers. The instrumentation is richly colored and Mr. Heggie’s aural palette was well served by this talented pit band. While the superlative conductor achieved an admirable balance with the vocalists, and while the chamber orchestration is very knowingly crafted, if I had one wish it was for a proper pit in the venerable Herbst Theatre.

The staging could hardly have been bettered. Liliana Duque Piñeiro’s spare, fluid scenery was grounded in a sort of cockeyed, trapezoidal proscenium within a proscenium, and tellingly decorated with an artistic, sculpted wreck of a car on end, that strained to the heavens. An elevated platform stage right is atop a staircase that descends to stage level. All the other settings are aptly suggested by pieces that roll or fly in and the witty economy of expression was one of the strong points of the visuals.

Since the story is happening now, Alina Bokovikov’s spot on costumes look like they are pulled off today’s Outlet Mall racks. Lucas Krech has contributed a moody, jittery lighting design that is not afraid to use shadows to heighten the drama. Peter Torpey has contributed a projection design that does much to establish the sense of place and mood.

Keturah Stickman has directed the proceedings with a wealth of imagination and dexterity. Ms. Strickman has succeeded in not only clarifying the complicated premise but has also invested it with great entertainment value. Her success in creating compelling stage pictures is exceeded only by her triumphant management of complicated, multi-layered relationships. It is difficult to overpraise her achievement in bring If I Were You to triumphant realization.

It is not often that I reach an opera’s end thinking “I could sit through this again right this moment.” But that is how I felt. Such an eminently satisfying artistic event deserves to be replicated and cheered to the rafters, as it was on this occasion.

Not bad for a first commission!