A co-production with Odense Symphony Orchestra, this new work is alternately entertaining and stirring, with a dose of “frustrating” thrown in. Given its many strengths, this impressed me as a wonderfully promising work in progress, rather than the gripping thriller its promotion seems to wish it already were.

The opera is inspired by a little-known short story by the Brothers Grimm, “The Twelve Brothers .” The ominous plot encompasses a wide-ranging exploration of good versus evil, highlighting power plays and malevolent political machinations. As is often the case, love wins out, but not before some gripping confrontations and melodious musings. More on the story below.

Ruders has described his music for The Thirteenth Child as “ear candy with chili peppers.” In this case, the candy was a tasty enough treat, but the heat factor of the peppers is in the mild to medium range. Given the percussive, aggressively knotty aural universe of Ruders’ acclaimed dystopian opera, The Handmaid’s Tale, I was expecting something a little more prickly here, given the Gothic possibilities of the Grimm source material. 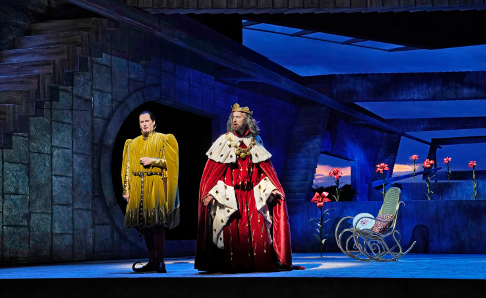 To be sure, there are somewhat atonal brass snaps and snarls as compelling commentary on the emotional subtext of the main characters. And the percussion section got quite a workout, manning an encyclopedic artillery of bombastic effects. But I was most struck by the prevailing melodious, tonal accessibility of much of Ruders’ writing, and the often shimmering string effects, complemented by haunting wind meanderings.

The vocal writing is characterized by uses of extreme tessiture at both ends of the range. Unlike composer Thomas Adès, who revels in sadistically making singers make ugly and/or incomprehensible sounds beyond the limits of their range, Ruders challenges his vocalists but does not plot to defeat them. His use of several falsetto effects for the two bass-baritones was more well-intended than well-realized. The recurring themes, the accommodating orchestrations, the sinuous melody lines, and the exploration of the exhaustively comprehensive uses of the human voice all combine to make for a fascinating listening experience. And what accomplished singers they are.

As Hjarne, King of Frohagord, bass David Leigh unleashed a torrent of dark, pointed snarls that conveyed powerful determination as well as pitiable self-doubt. His dramatic commitment and authoritative deportment commanded the stage. Tamara Mumford expertly co-anchored the first act as Gertrude, Queen of Frohagord. Ms. Mumford’s dusky, hauntingly rich mezzo-soprano and handsome regal bearing made her a perfect complement to her ill-intended consort. Although both singers successfully delivered affecting serpentine phrases in low-lying stretches, they also were capable of thrilling, sizzling outbursts above the staff. For reasons that eluded me, David Leigh, whose King character dies in Act I, returns to perform the miniscule role of Corbin, Eldest Prince in Act II.

This composer especially likes his singing low and dark, and bass-baritone Bradley Garvin revels in his murderous power grab musings as Drokan, Regent of the Kingdom of Hauven. Mr. Garvin is also called upon to limn rangy phrases with simmering wickedness, and his secure instrument rings out potently in the house throughout the range and at all volumes. 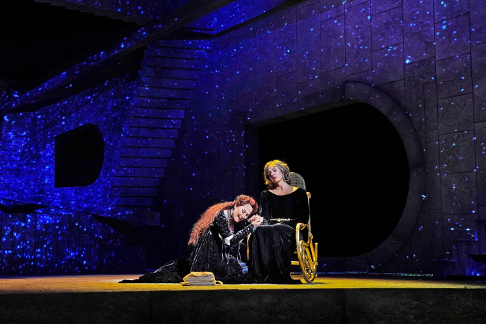 We have to wait until midway in Act I for the appearance of “the thirteenth child,” aka Lyra, Princess of Frohagord, but the delectable soprano Jessica E. Jones makes it decidedly worth the wait. Ms. Jones’ glistening lyric soprano is possessed of a silvery sheen and a sound technique that results in a limpid, touching vocal presentation.

Frederic, Prince of Hauven is her love interest and tenor Joshua Dennis sings the underdeveloped role with secure, honeyed tone that seems to sweeten the higher it climbs. Mr. Dennis’ voice blends enchantingly with Ms. Jones, making their dulcet duets among the evening’s lyrical highlights.

Apprentice Artist Bille Bruley finds a good match for his exuberant, substantial tenor in the relatively short, though important role of Benjamin, Youngest Prince of Frohagord. Mr. Bruley’s poised singing and likable demeanor, combined with his dramatic commitment made him an audience favorite in what is arguably the opera’s most appealing character. Fellow Apprentice Anthony Ciaramitaro showed off a strong tenor in his brief solo utterances given to the role of Toke, Second Oldest Prince. Chorus Master Susanne Sheston’s ensemble of Apprentice Artists was tutored to a fare thee well. 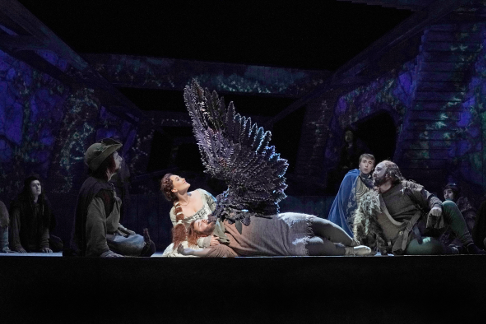 Although librettists David and Becky Starobin have condensed the fairy tale into manageable chunks, some holes exist in the script that seem to beg that we have filled in those blanks by having read the synopsis very thoroughly. The story in brief:

King Hjarne of Frohagord has 12 sons and has been led to believe that all of them wish him ill. His wife Gertrude is pregnant, and he tells her that if she bears a girl he will kill all the boys and let the daughter alone inherit his throne. To save them, Gertrude sends the boys out into the forest that night and gives them the magical red lilies that protect Frohagord to ensure their safety.

Flash forward 18 years: The King has died, the Queen is critically ill, and their daughter the Princess Lyra has grown to be a young lady. Frederic, a prince from a neighboring kingdom, is interested in her hand but the evil regent, Drokan, wants her for himself. Lyra tends to her dying mother who gives her 12 shirts she made for the boys and as her dying wish, sends the daughter off to look for them.

The Princess does indeed find her grown up brothers and to decorate the celebratory dinner table feast, she assembles a bouquet by cutting 12 flowers, not realizing they are the magic lilies that protected the boys. Her act unintentionally transforms her brothers into ravens (no kidding). Her mother’s spirit mysteriously appears to tell Lyra that she can redeem herself by staying mute for seven years.

Flash forward another 6 years: Frederic (remember Frederic?) finds the silent Lyra and still wants to marry her. But Drokan (remember Drokan?) still wants her too and tries to burn her on a bonfire. After Evil gets vanquished by Good in a brief struggle, all ends (mostly) happily. There is no question that there are great possibilities inherent in this fantastical tale, and many of them were successfully exploited. But there are a couple of dramatic and musical holes and transitions that I would urge the prodigiously talented creators to consider.

In an apparent effort to keep the piece lean and mean, the immediate acceptance of Princess Lyra by her brothers was a “huh?” moment. The men supposedly have a festering resentment of the sister they never met, since her birth caused their banishment, to the point that they commit to killing her should they ever meet her.

She encounters Benjamin first, and once he knows who she is, they immediately bond as besties. When the other brothers approach, Ben says he has to hide her or they will make good on their vow to kill her. About a page and a half later, he decides to reveal her, and the other brothers immediately accept her with no further mention of their avowed revenge.

Another leap of faith is the transformation of the boys into ravens. Only Benjamin appears on the fringes of the set with a big black wing attached to his left arm (only) that tries to show “I’m a bird now. . .get it? “The rest of the aviary is communicated in a swarming projection, one of many excellent effects by projection designer Aaron Rhyne that greatly enhanced the narrative.

The finale is the portion that needs the most redevelopment. A great tragedy befalls at the end, shaking Lyra to her core. In what should be a transition of eventual acceptance that life still must go on, and happiness can still be found, we get instead a rather abrupt dramatic shrug, a few bars of “stuff happens” sentiments, and a really unexpected flourish of a wrap up that was startlingly blunt in its brevity.

The Escher-like set certainly is a thing of atmospheric beauty. It is as though we are lying on the stone floor of an ancient castle looking up the tower in a forced perspective that ends upstage with a filigreed roof that allows us the view of the spectacular sunset beyond. Two long staircases, perhaps to nowhere, flank the structure stage left and right.

Darko Tresnjak directed the proceedings with a competent hand, although the stage pictures were often predictable, and characters did not always interact with each other as meaningfully as they might have. At a number of key junctures, soloists were singing to the back wall of the balcony rather than the person on stage they were addressing.

Too, there were a few underwhelming moments that could have been more imaginatively realized. The lighting of a (supposed) menacing pyre, the climactic (clumsily performed) swordfight that results in two deaths, the aforementioned (meant to be) ominous bird transformation, all seemed to go for less than they should have. Label them “opportunities missed.”

Saving the very best for last, the top notch SFO orchestra was in sublime form all evening long. Paul Daniel was in firm command of his forces and they responded with playing that was by turns luminous, wrenching, ethereal, chilling, and always dripping with theatrical fervor. Maestro Daniel made as impressive a case as possible for Mr. Ruders’ unique sound palette.

It is tricky to give a new work legs and highly laudable that Santa Fe Opera continues to champion these world premieres. There was so much to enjoy in this first run of The Thirteenth Child, that I hope its creators continue to develop it into the fully-realized, engrossing work it might become.

Photos by Ken Howard for the Santa Fe Opera