The quarry is huge, the historic part dates back to the Roman period and
houses a 4,780-seater theatre and a 2,500-seater one, and the more modern
part still provides stone for St Stephen’s Cathedral in Vienna. Access is
through a handsome modern building on the edge, followed by a long walk
down an elegant ramp which gives superb views and makes you realise that
this is no ordinary experience. The site had admirable catering facilities,
so visitors vary from those who arrive to picnic, through those sitting at
the beer garden like tables for refreshment to those being entertained with
wine and canapes in the Lounge. All in all, a complete experience.

Carolin Pienkos and Cornelius Obonya’s production of Mozart’s Die Zauberflˆte opened on 10 July 2019, and we caught the
performance on 15 August, towards the very end of the run. Sarastro was the
Australian baritone Luke Stoker, the Queen of the Night was Danae Kontora,
who studied in Munich, Pamina was Kateryna Kasper, who is a member of the
ensemble at Frankfurt, Tamino was the American tenor Michael Porter (making
his Oper im Steinbruch debut) and Papageno was Uwe Schenke Primus. Stage
design was by Raimund Bauer with costumes by Gianluca Falaschi. Karsten
Januschke conducted the Orchester der Budapester Philharmonischen
Gesellschaft and the Philharmonia Chor Wien.

The stage is huge (seven times that of the Vienna State Opera), but nothing
is permanent (no concrete allowed in the historic quarry) so there is no
stage machinery. Instead Bauer’s massive set created a series of effective
and striking acting areas enlivened by Friedrich Rom’s lighting. At the
centre was the ‘cloud portal’ a huge styrofoam structure of balls with a
central ‘eye’ and staircase, through which Tamino and many other characters
made their entries. This was also Sarastro’s domain, and video projected
onto it created different atmospheric effects, from Tamino’s serpent, to
the heavens themselves. Stage right was a huge black globe which housed a
darker domain and on top of which the Queen of the Night made her Act Two
appearance. Stage left was a stone portal above which was a huge nest from
which Papageno was engaged in stealing birds’ eggs when we first meet him.
Far above all this, on the edge of the quarry itself was a series of bird
structures taking the ‘set’ out to the very edge.

A quarry is not a ‘dead space’ in which to perform opera; there are all
sorts of sound reflections from the stone, yet Volker Werner’s sound design
was some of the best I have come across. No, it was not realistic, but then
this was not a typical theatre opera. Instead, we had vivid and immediate
sound, with a good sense of direction so you knew who was singing and the
off-stage orchestra (with the conductor controlling things via a huge video
of himself at the back of the auditorium) was well blended in. Unlike some
other outdoor (or semi-outdoor) opera experiences I have had, here I forgot
about the amplification and sound design and simply enjoyed the production.

For there was indeed much to enjoy. Most of the roles are double and triple
cast, but there was no sense of coming across the second or third cast at
the end of a run. Musically, this was a performance most opera houses would
have been proud to present. In one respect, I did not see what audiences
would see most evenings. To echo the fact that the opera’s librettist,
Emmanuel Schikaneder (an actor), was the first Papageno, the German actor
Max Simonischek was cast in the role. I attended one of the performances at
which he did not sing and so saw a trained opera singer.

Pienkos and Obonya had adjusted and modernised the libretto somewhat. As
far as I could tell making it more accessible and less arcane, but also
altering the balance of relationships so that Pamina was somewhat less
passive. Act One ended with her attempting to follow the men into the
temple and being stopped, whilst Act Two seemed more about Sarastro’s
intention to put both Tamino and Pamina to trial. And at the end, the Queen
of the Night and her Ladies were not banished or destroyed, but accepted
back and the Queen and Sarastro gestured to each other showing a measure of
peace and acceptance. During the second act, the words from the United
Nations declaration were projected upon the cloud portal. So, whilst
modernised, this still had a philosophical bent.

Theirs was modern fairy-tale too. Think Game of Thrones or Stargate. Falaschi’s costumes were great fun: the Queen of the
Night’s head-dress made her look like a giant insect whilst Sarastro and
his men wore huge animal heads, very striking indeed. Monostatos’
head-dress was a huge spiky thing – no wonder Papageno was surprised! The
result looked terrific and gave each group a distinct identity. The three
boys, in modernised Knightly armour, got around on Segways and clearly were
well trained, singing admirably whilst whizzing round the stage in
formation! 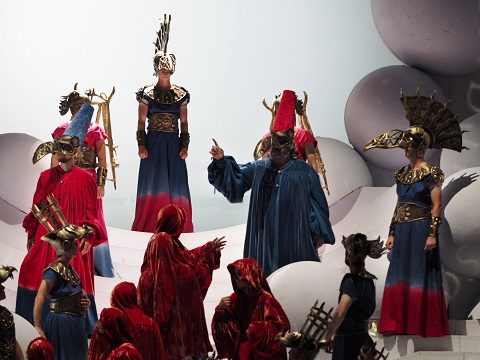 Unlike some outdoor events, the opera was not cut (the dialogue was
trimmed) and there was a proper interval (with catering), and to crown the
ending there were fireworks!

Kateryna Kasper was a terrific Pamina, one that I would love to encounter
in a more intimate production. There was a creaminess to her lyric voice,
and a lovely evenness of production which counts for a lot in Mozart along
with fine phrasing. She was a spunky Pamina, too, yet tugged the
heartstrings (as Pamina must) in ‘Ach, ich f¸hl’s’. Michael Porter made an
equally fine Tamino, singing with a vibrant lyric tone and engaging
naivety. This Tamino was perhaps a bit passive, but both Kasper and Porter
succeeded in the tricky task of making us care what happened to these two.

Luke Stoker was an impressive Sarastro, looking and sounding terrific
complete with the low notes and a nice ease at the top. He made each of
Sarastro’s arias a strong musical statement, but there was less sense of
Sarastro as a character: he was a bit more of a cypher or symbol who
appeared and disappeared. The only element of personality came out in the
‘O Isis and Osiris’ scene when it became clear that Sarastro wanted to
include Pamina in the trials. Danae Kontora’s Queen of the Night was
similarly symbolic or cypher-like, but perhaps something more sophisticated
might be difficult on this scale. But, Oh what a voice she has: both arias
were finely sung and Kontora managed to bring the right degree of heft to
the coloratura (you don’t really want the Queen to sound too much like one
of Donizetti’s 16 year old heroines) whilst having admirable facility, the
ability to colour the notes and make the F in alt seem part of the rest of
her voice! 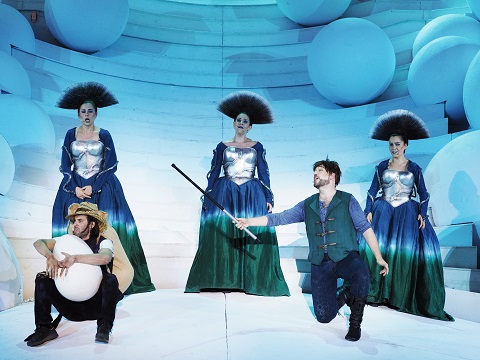 As if to make up for this, the three Ladies (Reka Kristof, Judith Beifuss,
Marie-Luise Dressen) had bags of character. They made a strong and vivid
trio, projecting character through their music and through action. Much of
what they did was choreographed, but each singer brought a nice personal
character to her particular Lady. They were comic, yet scary too.

I don’t know how much of Papageno was the production concept and how much
was Uwe Schenker Primus, and I don’t really care. The result was
wonderfully enjoyable and engaging. Schenker Primus managed to be full of
personality and project his comic character on a large scale. He was a very
human Papageno, not half-bird, half-man, but an ordinary man caught up in
extraordinary events. And I enjoyed the role musically too; both his
opening aria and the duet with Pamina made you care about him. This was a
larger-than-life portrayal which worked well on this stage. His Papagena
was the delightful Theresa Dax, an equally anarchic character the two
duetted engagingly at the end and during the stately finally, they
skittered around the stage chasing each other, adding a human element.

Benedikt Nawrath managed to be scary as Monastatos without veering into
objectionable caricature, and in Act Two when he approached Pamina and took
his helmet off you almost felt sorry for him! Gunter Haumer and Tamas
Taranyi did multiple duties as Speaker, Priest and the two Armed Men, and
did so admirably. Again, the production made them more symbols than
characters, and it was musically that we appreciated them most. The Three
Boys were all from the St Florianer Sangerknaben, and Christian Ziemski,
Moritz Strutzenberger and Lorenz Laus made the Boys visually and vocally
most enjoyable.

The hard-working chorus contributed much to the production both in terms of
firm choral tone and stage discipline, and the 55-strong orchestra though
hidden away gave much to enjoy too. Conductor Karsten Januschke did an
admirable job keeping his disparate forces together and managed to create
real music too so that moments like the overture were enjoyable.

This production did not try emulating a smaller scale stage production;
instead it re-worked the opera to suit the quarry stage. In so doing,
Pienkos and Obonya managed to preserve many of the qualities of Mozart’s
opera that we love.

Next year, Oper im Steinbruch will be staging another operatic fairy-tale,
Puccini’s Turandot (8 July to 15 August 2020) with Martina Serafin
sharing the title role.